Brockweir, Gloucestershire. UK
This particular Pied Wagtail is a regular visitor to Brockweir where it nests under the bridge. It can often been seen strutting along the railings and even on the busy road that leads through the village. I had to wait an hour until he or she turned up but it was well worth it. I am told that the Pied Wagtail is a very common bird in England but for me it was yet another "lifer"
The first picture shows the bird walking along the bridge. The second is at the end of the bridge on a stone wall abutment. The third shows how a background choice can alter the "feel" of an image and the fourth is the bird picking off insects.
While I waited, I also photographed a Goldfinch, Swallows, Wood pigeons, a very scruffy long-tailed tit and an even scruffier Robin. As I mentioned I am here on a family visit and hope to make it to Slimbridge or somewhere along the Severn Estuary to see if I can find some early migratory waders.

I wondered who was making all the noise in the forest, it turned out to be the beautiful Nuthatch (Sitta Europaea)
Found in the Europe and as far north as Iceland the Nuthatch feeds on nuts, insects and can often be seen creeping along tree limbs, similar to the tree creeper found in North America.

I visited Cannop Ponds in May 2011 and again this year in July. The Manadarin duck I had previously observed was in eclipse and looking very ordinary so I am posting a before and after shot just to show the transformation.
The pond was also teeming with Coots and their young as well as moorhens who were regularly being chased off by the territorial Coots. A few Shoveler, Mallard and a pair of Mute swans with three cygnets were also present.

This bird was one of a pair and to see it darting from branch to branch and from tree to tree was magical. The Greater spotted woodpecker (Dendrocopos Major) is the size of a blackbird or American robin. It drums on large oak trees and gives out a loud 'Kik Kik'
Because we are in the late summer the morning chorus of the spring has been replaced by the sounds of the young nestling begging for food and the somewhat comical newly fledged, who in their first days away from the nest are learning to catch insects or find fruit.
The Greater spotted woodpecker will come readily to the bird feeder but because I didn't bring my blind I have to sit or stand very quietly for long periods of time. I usually stand in the shade or lean on a tree, I call it standing meditation bird photography.

The commonest tit in the UK is the Great tit (Parus Major). A regular visitor to the bird feeder, it is often accompanied by the Blue tit (Parus Caeruleus) and sometimes the Coal tit (Parus ater)
These three birds were photographed simply by putting out some suet and seed and waiting patiently.
One thing about photographing birds in July and August is the moulting process which makes the birds look little ragged, however that is what birds do.
Enjoy these images as much as I enjoyed sitting surrounded by Robins, Dunnock or Hedge Sparrow, the Jay (no pic yet) and the brilliantly coloured Greater spotted woodpecker. These images will be posted when I have finished gardening. 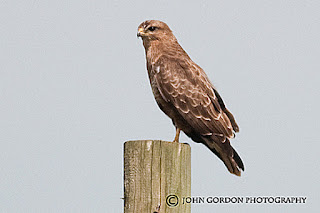 Last night at about 10 p.m a Buzzard flew into an old Oak tree at the bottom of the garden.
I opened the window slowly and fired off three handheld shots on my Nikon D300s with a 300 F4 and 1.7 converter with SB800 flash. I was surprised to find that the auto focus actually worked in the darkness. Here is the result. The second shot was taken by the roadside near Gloucester.

Monday July 9,2012 6.A.M.
Apart from one other early bird (excuse the horrible pun) I had Blackie Spit and the birds all to myself. The ocean was dead calm, the flood tide was about to begin and the only sounds were provided by Mother Nature herself. Above me two Caspian terns were diving for fish, a dozen black-bellied plovers, their breeding plumage beginning to fade fed on the estuary mudflats. Five Kildeer, some of them youngsters were hunting for food in the exposed eel grass while one after another, a parade of Great blue herons flew overhead, all going in the same direction to where, who knows!
I settled down to photograph Savannah sparrows and their young. I was quickly distracted by a flock of house finches feeding on seed pods, an American goldfinch flew in close enough for a quick picture, three frames and he's gone.


Over my shoulder I see a movement on the beach, it's a Long-billed curlew feeding in the shallows. I have to work fast before the first dog guardian/owner arrives as the bird is feeding in the off-leash area of the beach. I make myself as small as possible as I inch my way toward the waterline, slowly but surely the bird accepts my presence and continues to feed. I spend 15 minutes kneeling in the mud but it's all worth it in the end.
Good birding!!


Despite the ten hour drive to get to Chaunigan Lake, the lack of electricity and running water and scary biffy, the week long expedition was a great success. I hope you enjoy these images as much as I enjoyed the mosquitos...........just kidding!

June 23-30 2012
Following is a edited selection of my photographs from the week long 2012 British Columbia Bird Atlassing Count in the Chilcotins area of B.C.
Participants included trip organizer Gareth Pugh, fellow naturalists/birders Wim Vesseur, Leona Breckenridge, Bob Puls, Viveka Ohman, Ian Robertson and myself. The count area included parts of the Nemaiah Valley, Chaunigan, Elkin and Vedan Lakes and adjacent areas. The final count is not finalized but at least one hundred species were identified either by photograph,song or by visual means.
Full results from the count will be available soon on the website below. For more information about the British Columbia Bird Breeding Atlas follow the link below:

More images can be seen at
http://www.johngordonsphotography.com