Granite slabs are scattered everywhere on Flatiron. The nooks and crannies in the rock harbour insects and plants, the flowers and seeds providing a rich food source for the many inhabitants.

The forest trail to Flatiron was steep, rocky, slippery and wet. There was hardly a sound in the forest, just the odd Chestnut-backed Chickadee and Douglas Squirrels. Mushrooms were abundant. A few pickers were out collecting. After a two kilometre hike the forest opened up providing 360 degree views of the surrounding mountains.

During the summer there had been numerous reports of Northern Pygmy Owls, Mountain Chickadees, White-winged Crossbills and White-tailed Ptarmigan, all birds I needed for my Fraser Valley Big Year*
Craig, my hiking companion for the day soon picked up the call of a Northern Pygmy Owl. Fortunately we were able to climb a little higher until we stood on the same level as the bird which was perched right above the trail.

Then to our surprise a second owl perched alongside. The birds had their eyes on something, they seemed agitated. One of the birds plunged into the undergrowth and out of sight, looking back the other owl had left too. What a start to the day.

We continued upward, my legs turning to putty and heart racing, my lack of fitness leaving something to be desired. Five minute breaks were the order of the day. Climbing higher a flock of White-winged Crossbills were feeding on Sitka Spruce cones. They stayed long enough for a few photographs.
Eventually we reached the monument and a fork in the trail. Needle Peak to the left and to the right Flatiron and hopefully the Ptarmigan. We were still 1.5 km away. When we arrived there were already a few hikers and swimmers cooling off in the lake but alas no Ptarmigan. A flock of birds flew overhead, they sounded like Gray-crowned Rosy-Finch but I couldn't make them out or get an ID picture.
Craig decided to make his own way up the granite strewn escarpment. I waited below. Eventually through my binoculars I could see by his stance he was photographing something, probably the Ptarmigan. It was time for me to move.
Suddenly my legs came to life, the energy that had been drained away on the hike had miraculously returned. Soon I was within metres of the summit and the radio tower. That last scramble was a 167 m gain but well worth it. As I reached the summit my heart was beating so hard I couldn't hold the camera still, especially a 500 mm.  I waited a few moments before firing off a few frames in case the Ptarmigan decided to take off on me. They didn't.
Among the tangle of rocks a slight movement gives away an elusive White-tailed Ptarmigan.
The Ptarmigans's plumage is a perfect defence against aerial predators.

Eventually we counted twenty-five or more Ptarmigan, most were hidden in cracks or in the shade of the rocks, yet others nibbling on a type of sedge. Their presence became apparent only when they moved. 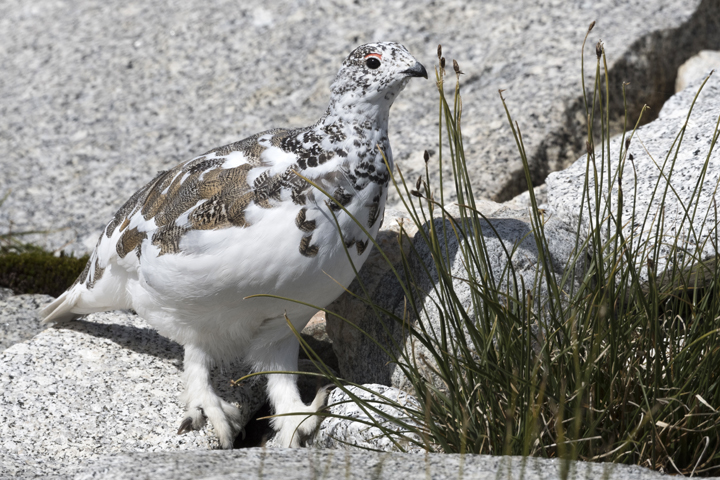 Once the birds realized we posed no threat the covey came out to feed.
At this point I wish I had brought my Nikon 200mm-500mm F 5.6 zoom rather than my fixed 500 mm F5.6 prime. While Craig was able to stand in one spot and compose his photographs I had to back up. A zoom would have been a better option, albeit heavier.
I used a CCS G3 Cotton Carrier camera and binocular harness with the 500 mm on my chest and my binoculars on the side. During the hike I hardly noticed their presence except when I needed to shoot. I've photographing for forty years and it has proven to be the very best carrying system I have ever used.
G3 Harness

We reached an elevation of 1898 m with a combined elevation gain of 867 m from the car park. Eventually it was time to leave and make our way back down the mountain. The Ptarmigan were my third year bird** for the day.
The walk back was filled with the most majestic views imaginable, it's been a long time since I had been hiking. I had forgotten how beautiful the mountains can be. I used my iPhone 8 to take the accompanying scenics. 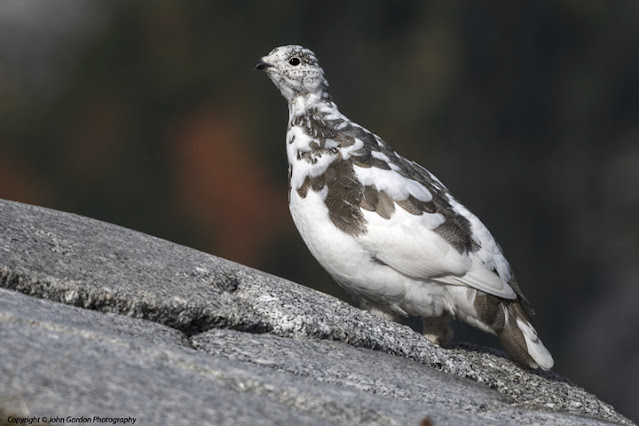 The descent I was warned could be as difficult as the accent. True to form the steep trail was a combination of wet moss and slippery granite, for me at least it was treacherous. I'm glad I carried a pole for balance.

On the decent I thought I heard chickadees. Eventually, after a bit of searching we found four Mountain Chickadee, right on the trail,  the fourth year bird of the day. I screwed up the exposure but thankfully I had shot in Raw and was able to save the picture albeit the highlights were lost. A shame really as the background was perfect.

A hour later were we almost back at the car. My brain and feet were completely out of sync. I was exhausted, both mentally and physically. However both the birds and scenery were well worth the effort. Who knows, I might even try another hike one day.

Established in 1986, Coquihalla Summit Recreation Area lies in the territories of the Nlaka’pamux, Sto:lo, and Yale First Nations. (Outdoor Vancouver)

*A big year is a personal challenge or an informal competition among birders who attempt to identify as many species of birds as possible by sight or sound in any one year.

** A year bird is a new species found during a big year.

"It's never too late to take a hike"