If You Go Down To the Woods Today

In the heart of the Forest of Dean, Nagshead Nature Reserve (NNR) Nagshead Nature Reserve
has a series of scenic trails through stands of ancient Oak and Beech trees. The forest floor at this time of year is carpeted with Bluebells while in the canopy Tree Pipits and Pied Flycatchers have returned to nest. The cacophony of bird song is something to behold. Starting at 5 a.m. and until after dark I have never heard so much birdsong anywhere. Later in the month Nightjars will be heard.
As I settled into one of the two hides (blinds) a pair of Song Thrush come to drink and bathe in a small pond, a rabbit busily feeds in the open, despite the chance of being predated by a nearby Buzzard and in the distance a Blackbird sings from the branches.


As I was observing the Song Thrush bathing, my attention was caught by the sudden flash of black and white about thirty feet away, finally I get to see but not photograph a Pied Flycatcher. As I looked through my binoculars I noticed some movement behind the birds. Imagine my surprise when not one but six boar, a sow and her brood appeared. Slowly over a period of fifteen minutes they  ventured  out into the glade next to the pond. From my elevated view I watched them for an hour.
I have provided a link to those who are interested in how the boar, which escaped from a farm near Ross-on -Wye have over the years multiplied and have polarized the community by their sometimes destructive presence.

Boar in the Forest of Dean

Although the main purposes of my visit to the UK is to spend time with family any chance to sneak off birding is always a welcome diversion. While most of my family live in the Wye Valley near St Briavels the other half live near the East coast in Louth, Lincolnshire.
Lincolnshire is what Saskatachewan is to Canada. Flat, large farms, acres of monoculture, ancient hedgerows, a smattering of rolling hills called The Wolds. An added bonus is the proximity to the Wash, itself part of a major migration flyway.
As I drove around the back roads, the hedgerows were alive with birds. I saw pairs of LBJ's while waiting for a traffic light to turn red, their long tails held high as they foraged next to the busy road. I have no idea what they were, I saw many birds which were unfamiliar while driving but they'll always be another day.

I made the six hour car journey across the Uk from Gloucestershire to Louth. My first birding stop was a short break at Hartsholme Country Park just off the Lincoln bypass. The park is operated by the City of Lincoln, a free car park, interpretive centre and extensive walks including lakes, heath and forest make it a great place to visit. The Great Crested Grebes and two Red-crested Pochard (a rare visitor but most likely escapees from a collection) were the first birds I photographed.

Then it was on to family in the historic market town of Louth for the family visit. They weren't interested in going birding but were very proud to show me the blackbird nest at the bottom of the garden.
Next day I was off to Gibraltar Point National Nature Reserve. The location was featured in the April edition of Birdwatch magazine and the excellent article made my decision where to bird an easy one. The start point for me was the Beach car park a few miles south of Skegness. 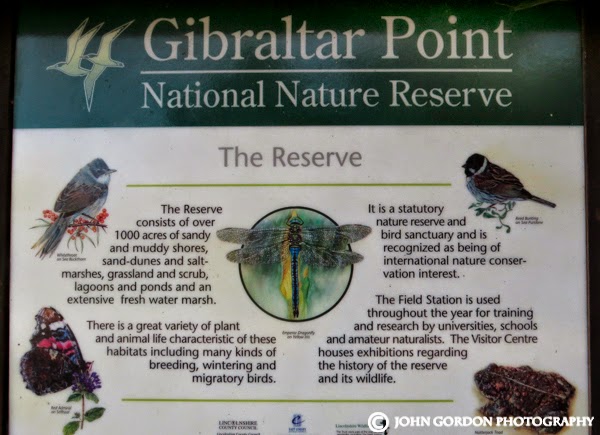 The Gibraltar Point (GP) is comprised of a mixture sand dunes, extensive beaches, numerous ponds, mixed hedgerow and marshlands. The morning I arrived a Hoopoe was briefly spotted. I was happy to spot anything but a Hoopoe would have been an amazing. Anyway, a Whitethroat would be my first "Lifer" at GP and they were singing everywhere. They are not the most easy bird to approach, the bird books describe them as "skulking and secretive" a very apt description.

Then I came across a Meadow Pipit (below) sitting on a fence pole. Anyone like to point out if I have made a "Howler" with the I.D.


Continuing through the reserve to the marshes I saw a new bird fly overhead. As I made my way to one of the three blinds (hides) I could see it was a Lapwing making a noisy and acrobatic display. I don't have to tell any birder how exciting it is when a new species is spotted. As I settled in and opened the viewing panels I was greeting by a colony of breeding birds including Shelduck, Black headed Gulls, Mute Swans, Avocet, Lapwing and probably other species. Rooks were collecting tufts of grass, a Pheasant wandered by and a Pied Wagtail landed twenty feet in front of me.


Finally .. but not least and this is where some positive feedback would be great. What is this species?
I hope you have enjoyed this ramble through Gibraltar Point. Please excuse any typos, the intermittent internet coverage has made blogging a little challenging but so far the GP trip has provided me another 9 "Lifers" for a total of 34 for the trip so far.

The Royal Forest of Dean

April 18 2014 The Royal Forest of Dean, Gloucestershire UK Sunny
I emigrated to Canada on 1978, actually I went over for "a visit" and never returned except to visit my family who still live near St Briavels and Brockweir.
Most of my early trips back would find me fishing at Lydbrook for chub or searching out tench and carp but over the years I found bird watching a far more enjoyable way to enjoy nature. I can't remember seeing any birds while I sat and waited for a bite, I just wasn't aware of them.
My first years in Canada were spent establishing myself and after loosing my $5 Instamatic camera I received a Pentax K1000 and a 50 mm lens for Christmas. I photographed a few birds here and there and became a newspaper photographer. I covered all sorts of events in my thirty year career and after retiring from the press in April 2011 I began photographing birds. When I come over to the UK I try to take advantage of all the wonderful birding here. A couple of years ago I visited the Farne Islands and last year the Highlands of Scotland.
After Slimbridge, my sights were set on the Forest of Dean and will be going to the Newport Wetlands when I have a chance. Other locations I hope to visit are Frampton and Nagshead.
Before I left Vancouver I put out a few "feelers" to see whether any birders would like to go out together. I received a reply from Ruardean and Cheltenham club birder Tim Fletcher who led me on a trail through the recently cleared area around Woorgreens near the Speech House. We had been on the trail only a few minutes when he spotted a pair of Siskins. I "phissed" them in and one posed for me in the brilliant morning sun.

Tim and I then left the wooded trail and entered the open heath where the gorse with its yellow flowers and heather make the perfect open habitat for a plethora of bird species, dragonflies, amphibians and reptiles including the adder.
We were surrounded by birds, many were in pairs. The first was a Tree Pipit which came out to see what we were up to. Thank goodness Tim knows his British birds and birdsong.

Then it was to Woorgrens Lake where we watched Little Grebe feeding and other common waterfowl. The next stop was Cannop Ponds but it was teeming by Easter holidaymakers enjoying the sun.
However the bird feeder was producing, A Marsh, Long-tailed, Blue, Great and Coal Tit, Chaffinch, Dunnock and Nuthatch came for seed. The Mandarin Ducks were nowhere to be seen but a Cormorant stood guard near the pathway. Tim told me there have been some "good birds" seen at Cannop over the years.

The Forest of Dean is somewhere I plan to return to after my trip to Lincolnshire where I am told the birding can be quite good at this time of year, funny coincidence that!

April 17 2014 Slimbridge Wetland Centre. Nr Bristol and Gloucester UK Sunny
The 800 acre Ramsar site attracts a diverse range of birds that winter and summer there. There are ponds, fields, hedgerows and shoreline. Here the Skylark can be found on undisturbed grassland and during migration the Severn Estuary acts as a funnel attracting a myriad of species to Gloucestershire and the surrounding counties.

A full description of the site can be found at wwt.org.uk/slimbridge


To visit, the closest local airport is Bristol but both Heathrow or Gatwick 9 are only two hours away. The site is similar to Vancouver's Reifel but in addition has a captive bird area where one can see such rarities as the Redhead Duck, Smew and Chilean Flamingos. Outside of that enclosure are a variety of habitats that contain the wild birds such as the Avocet, Common Eurasian Crane and Little Egret.
As I arrived I quickly let behind the "exotics" and headed for the South lake where I found the Cranes that have now returned to the UK after 400 years of absence. A pair were nesting in the middle of the lake. A pair of Greylag Geese were defending their territory while three Shelduck rested on the mudflats. Three 'Lifers" in five minutes can't be bad but more was to come. A fellow birdwatcher pointed out a Sandpiper then an Oystercatcher.

In the afternoon I found a bird feeding station and was able to get a few close-ups of some common birds.


If you have got this far in the blog I thank you for your patience. What started as a passing interest thirty years ago has become my passion. Birds and birding itself took second place to my career in as a community newspaper photographer. During that time I had the opportunity to photography a myriad of events even self assigning myself to photograph the Canucks, B.C. Lions, English Premier League Football, music legends like B.B. King, Leonard Cohen and best of all the Dalai Lama. The "Big Man" as he is affectionately called even came up to me in a press scrum and shook my hand. I have to say it was the highlight of my thirty year careers as a photojournalist.
These days I find birding and bird photography the most rewarding for so many reasons I would need to write a book about it.
Much of my success I owe to the many birders who I have met since I started photographing birds seriously in April 2011, the fateful month the newspaper I worked for told my services were no longer needed. As it turned out the financial compensation softened the blow and changed my life for ever.
Today I couldn't be more happier walking around Brydon Lagoon with my Canon SX50HD point and shot or lugging around the "Big Gun"
Either way, birding has enriched my understanding of the natural world that surrounds me and us all. I couldn't think of anything I would be prefer to be doing with my life.