Fun in the Sun

March 2019
.
Birding in Mexico is awesome. This latest trip was my third visit.
Our hotel was perfectly places being close to a breakwater, a harbour, a beach and an estuary.
When beach-combing I brought along my Nikon P1000 and iPhone just in case I saw something interesting.

***
After a few days acclimatizing it was time to meet up with a long-time friend and check out the birds. Monday morning saw us drive to nearby Boca de Tomates just a few kms from downtown Puerto Vallarta. Check eBird for exact locations. My longtime friend Scott spends the winters in Mexico and had already scouted out the location.
The first sighting was a Grey Hawk. The road to Boca de Tomates was very 'birdy' despite the dust and noise from passing cars making their way to a popular Mexican beach restaurant at the end of the road.
Our late start meant it was already beginning to warm up. Despite the less than ideal conditions we did see plenty of American Redstarts, Black-throated Grey Warblers, Blue-Grey Gnatcatchers and as we neared the Mangrove swamp several Limpkins prodding around in the mud. Happy Wrens, San Blas Jays and White Ibis were feeding around the edges of the swamp. A dozen American Crocodiles lounged in the murky green water.


American Alligators are found further north in Florida and other surrounding states while American Crocodiles (above) prefer a warmer climate though both species do co-exist in perfect conditions.

At the beach we refreshed with a few Pacifica beers before checking for more birds. Amazingly developments haven't touched the lagoon or shoreline and I am told there are moves to protect even more habitat. Several nature and government groups are working hard to preserve the remaining habitat from urban sprawl, golf courses and mega hotels. There were plenty of birds, the most numerous were Western Sandpipers re-fuelling-up for their northward migration.
Herons included Great Blue, Little Blue and the Tri-coloured. Royal Terns made their presence known flying over our heads patrolling the surf before making vertical dives for fish.

Along the beach and in front of our time share several Willet, Neoptropic Cormorants and Reddish Egrets took little notice of local fishermen and beachgoers.
Pool Life 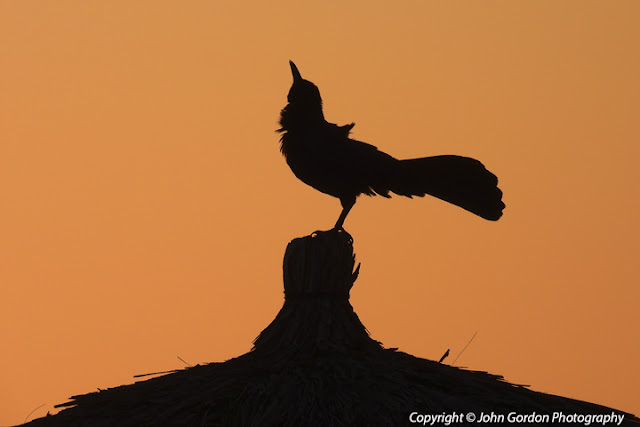 When laying by the pool reading In Search of the Albino Dunnock it was easy to be drawn away from the page by the soaring Brown Pelicans and Black. The afternoon thermals radiating off the hotel roof appeared to keep the birds stationary until for whatever reason a slight drop of a wing would send them higher and out of sight. Even my long suffering non-birding wife cast an admiring eye at the beauty of their movements and ease of flight. Perhaps the happy hour 2 for 1 Tequila Sunrise specials played a little part too, who knows. When a passing grackle crapped on her, I told it was good luck. She believed me. Keeping my book dry was about the most stressful task of the day.
Other deck chair birds included Rough-winged Swallows and Yellow Warblers. The ever present grackles used the pool fountain to bathe and preen, Fun in the sun indeed.

Our guide Jose Antonio Robles, long-time friend Scott and myself left Nuevo Vallarta for the two hour drive the historic town of San Sebastian del Oeste. Jose came with great references from another Vancouver birder so we knew we would be in good hands.
The village is made up of ancient haciendas and century-old homes and a picturesque square. There is also a valuable legacy of tradition and history which makes a visit well worthwhile.
We left Puerto Vallarta at 7 a.m and after an hour we pulled off on a nondescript road and parked. Black-throated Magpie Jays soon made their presence known, they were hard to miss. Elegant and Citreoline Trogons, Broad-billed, Berryline, Violet-crowned and Cinnamon Hummingbirds flitted through the vines. We added Greater Pewee, Ivory-billed Woodcreeper, Cordilleran and Brown-crested Flycatchers to our lists. Scrub Euphonia, Indigo Bunting and Summer Tanager were other highlights.

Jose found us a flock of fourteen Crested Guan, without a guide we could have probably overlooked them. They hung around us for thirty minutes, playing hide and seek high up in the canopy. They  eventually gave us great views as they flew to the next tree

We arrived at San Sebastian in the heat of the day, the kind of heat that makes a person search for the nearest shade and a cold beer. Within minutes Jose found us a Blue Mockingbird but it was way too hot for someone recently off the plane from Canada. Skin can burn in ten minutes. Photography under this kind of light is next to impossible especially with a dark bird like the mockingbird. I used ©Lightroom to lighten the shadows.

We stayed at the inexpensive but excellent Hotel Los Arcos del Sol where we had a delicious lunch. Located next to San Sebastian del Oeste’s main square, Los Arcos de Sol is a 200-year-old building with charming patios and gardens.

We spent the afternoon exploring the lower regions of surrounding hillsides and later the back alleys and garden of the village itself.


We had a good selection of warblers and flycatchers including this gorgeous Slate-throated Redstart (originally Whitethroat).

The mountain is perfectly accessible by car. Scott'sVW Jetta did just fine.
As we slowly climbed Mexican Pine and Oak dominated making ideal habitat for the many specialities not found at the coast.

Around each corner there seemed to be good birds and many lifers.

Rancho Primavera is an hour and half south of Puerto Vallarta (PV) To make the best use of my time I left the coast at 5.30 a.m so I would have time to do some morning birding. Driving south past the PV Botanical Gardens (where the best time to bird is in the morning) eventually climbing to 2000m and the quaint village of El Tuito. Rancho Primavera was just outside town.

Some of the accommodation is around the ranch pond. The feeders are stocked daily with fruit and nuts and sliced oranges and lemons. A closer look with bins revealed Black-crowned night Herons, Wood Stork, White-faced Ibis and Black-bellied Whistling Ducks, a Least Grebe, Neoptropic Cormorants and a couple of horses.


This was the only frame I managed of this timid oriole. I was told it came to one of the many feeders but was unreliable. I hid behind a bush and within five minutes the bird arrived and left without feeding. I never saw it again.

When on holidays it is not always possible to photograph at the best time day but when the light, bird and a little luck all coincide the results can be exceptionally pleasing to the eye. The above image is a good example of a shot taken a few moments after sunrise.


The above image is taken during the last moments of daylight. Handheld with at 1/50 sec at 5.6 the image works on the level of being a good ID shot but lacking the vibrance of the Motmot.

Unless otherwise stated all images were taken with a Nikon D500and Nikon 20mm-500mm F5.6 handheld.

One thing that I did notice on this my fourth trip to Mexico were the posting of notices everywhere warning people not to throw garbage on the roadside. Mexico is changing and changing quickly. The booming economy is putting pressure on the remaining natural spaces. There is however a growing awareness of what treasures Mexico has to offer, not only to Mexicans themselves but for the burgeoning tourist industry. Just for the birder alone there are over one thousand species to discover. Incredibly I have already seen 40% of all Mexican bird in just three short visits, the birding is that good.

33 Lifers and memories to last a lifetime.

There is no better place to experience the phenomenon of the spring migration than the Skagit Valley. Only 150kms east of Vancouver, the Skagit Valley it located south of Hope in the North Cascade Mountain Range.
An official bird checklist is available from park wardens and there are excellent campsites along the road to Ross Lake that lies on the Canada/USA border. See below for details and some images from previous years.

I hope to see you there.

"It's never too late too start birding"