I have learnt that when a rare bird report comes in the best chance of success is to jump in the car and get moving right away. With the help and advice of many I have been fortunate enough in locating numerous Lower Mainland 'Lifers' and other interesting birds. Wednesday was one such day.

VANBCBIRDS had been reporting a Wandering Tattler at Iona. For one reason or another it took a text from another good birding friend to persuade me to drop my gardening and DYI chores and make the trip from Surrey. I hadn't seen a Wandering Tattler since a visit to Mitlenatch Provincial Park back in the mid 80s. There I had taken a grainy shot on Kodachrome 64 so this was possibly a chance to update my files and get another view of the elusive sandpiper.
With temperatures hovering around 22 c and with sunburn a good possibility, the thought of walking 2.5 kms on the South Iona jetty to look for a bird that might have already departed for California had me wondering if I was still sane!

I made a last minute decision to bike it, I hadn't biked or done much exercise in years so it wasn't long before my legs could pedal no more. I stopped and started several time before arriving at Marker 164, the last place the bird had been seen. I couldn't find the Tattler but a Spotted Sandpiper was feeding way out on the sandbar.


As I had the bike I thought I might as well make it to the end of the jetty where the only signs of life were two noisy Caspian Terns and what appeared to be a topless sunbather of the female persuasion, but without my bins I couldn't make an exact identification!  Making my way back I bumped into another birder who knew exactly where to look (for birds of the avian kind) and soon we were both photographing the Wandering Tattler. The bird was feeding on tiny crabs forced onshore by the flooding tide. Not to be outdone, a curious and possibly the same Spotted Sandpiper (above) landed on a rock a few feet away to pose for pictures.

In conclusion I'm glad I made the effort to photograph today. I did get some fresh sea air, exercise and with this humble series of blogs an attempt to throw off a writer's block that has haunted me for over a decade.

An American Kestrel hovers above the Boundary Bay dyke pathway. From one perch to another the female Kestrel makes its way along a hundred or so metres of hedge, eagerly looking for any movements in the tall grass below. Even barking dogs, walkers and the sudden movements of passing cyclists cannot deter the bird's concentration.  There are scores of grasshoppers everywhere. After a few sideway glances, a menacing stare and a little bobbing of the head the hunter suddenly swoops down on another juicy meal. Not every hunt is successful but during the time I spent observing at least five large grasshoppers were dispatched.
As the setting sun waned and the cool breeze off the Boundary Bay brought to close yet another day in paradise I wondered if could life be any better for a BC birder.

Camera Test. Canon SX50 HS Superzoom
I have always wanted to test an inexpensive super zoom point and shoot to see if it would be useful addition to my already heavy camera bag. Below are some examples.

July 5, 2013 Grouse and Cypress Mountain. Sunny
Following my most excellent road trip mentioned in previous blogs I came home to much grass cutting, pond cleaning and planting. Birding took a backseat while I slowly caught up with things. The Lower Mainland weather has been so hot that birding and gardening has to be done early in the day. By 5 a.m Friday I was making my way to hopefully photograph a male Nashville Warbler on Grouse Mountain. Didn't really know if it would still be there, The bird had been first reported about ten days ago so who knows. I soon joined fellow photographer/birders Raymond and Tak, both had visited the location before and within twenty minutes and with the sun still behind the mountains the colourful songster arrived and gracefully posed for us. What a beautiful bird the Nashville Warbler is! Some distant firs created a pastel background so perfect for the  500mm F4 and a 1x4 converter combination. Just another day in 'birdie' paradise!


Next it was off to find a MacGillivray's Warbler. Without spotting any at Grouse it was off to Cypress Mountain where better luck might ensue. There are plenty of turn-offs and viewpoints on the mountain road to Cypress where openings in the forest attracts a wide variety of species. Here are the morning's results. We came across a small flock of Townsend's Warbler, heard Sooty Grouse booming away, watched a pair of Band-tailed Pigeons and were serenaded by a Spotted Towhee before finding our other warbler of the day.

June 4-5 2013  Regina Beach, Saskatchewan
My whirlwind visit of Saskatchewan via Point Pelee and Churchill came to an end with two more days of birding.
I had 31 'Lifers' in Ontario, 9 in Churchill and a Brown Thrasher in Saskatchewan. That's 41 plus a few flycatchers yet to be identified.
This is my second annual birding road trip and so far it has been two for two. Last year I drove through southern B.C, the Okanagan, Milk River in Alberta and Regina and had a great time. 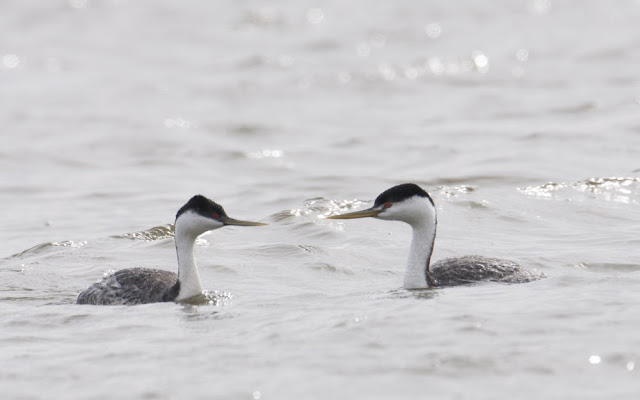 Are these Western Grebe on the left and Clark's Grebe (right) or both Westerns, any takers out there? 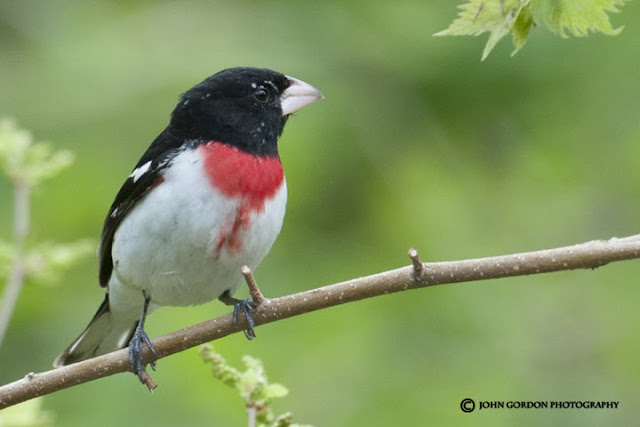 Rose-breasted Grosbeak
Posted by John Gordon at 22:09 No comments:

'A Slough of Birds' Saskatchewan Part 2

A Slough of Birds

More localized meanings of slough are: