Sorry about the short notice. Thanks also to everyone who came out Wednesday night for the Kenya talk in Fort Langley. Much appreciated. 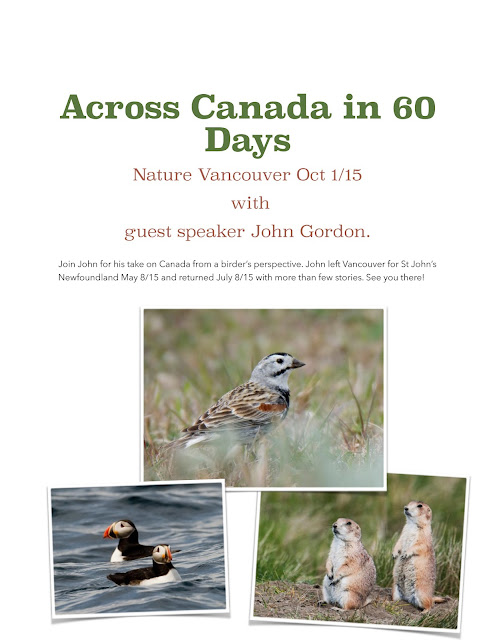 Finally, after five attempts I now have some decent shots the Great Egret. The elusive wader had been hanging around the Lower Mainland for the last month or so. The bird had lots of us birders running around and there are still many hoping for a first sighting. Egrets are not often seen here, I believe the last sighting in the Lower Mainland was 2013 at Grant Narrows.
Apart from one distant view through a scope I had been chasing the egret for two weeks without much luck. Finally I just happened to be in the right place at the right time. I had just photographed the Sharp-tailed Sandpiper and Sora in the outer ponds at Reifel. The sharpie was a 2015 year bird for me and so after a long day I had decided to go home. On my way out to the car a cluster of photographers were all pointing their lenses in the same direction which usually means only one thing, the egret was back in Fuller's Slough. It was at first a distant speck some 400 metres away. I decided to stay to see if the bird would move. There were a few birders who I knew so the time passed quickly. We whittled away the time comparing lenses, a peculiarly male trait when after about an hour of waiting the egret suddenly flew closer, it was still a speck but a much larger speck. None of us had a Hubble telescope so we waited and waited until for whatever reason the egret decided to fly directly at us. I'm glad I stayed.
I shot this with a tripod mounted Nikon 500mm F4 on a D300s. I had just packed away the new Nikon 200mm-500mm F5.6 which I had been test driving earlier in the day. I would have loved to have had the zoom close at hand as the bird came closer and I couldn't get  all of the bird in as it flew over and around us. The lady next to me with a 80mm-200mm zoom probably has even better shots, hell, even someone with a point and shoot would have worked. Don't get me wrong I am not disappointed with these results after all the effort and time I had put in the bird.
When I got home and checked the files in Lightroom I am glad I had underexposed the shot by a stop and half as it reveals good detail in the feathers. The F8 F stop gave me good depth of field and 1/2000 sec shutter speed froze the action.

If you have the time come along an enjoy this free presentation. The library is in the Langley Township Hall behind the London Drugs/Walmart Complex. 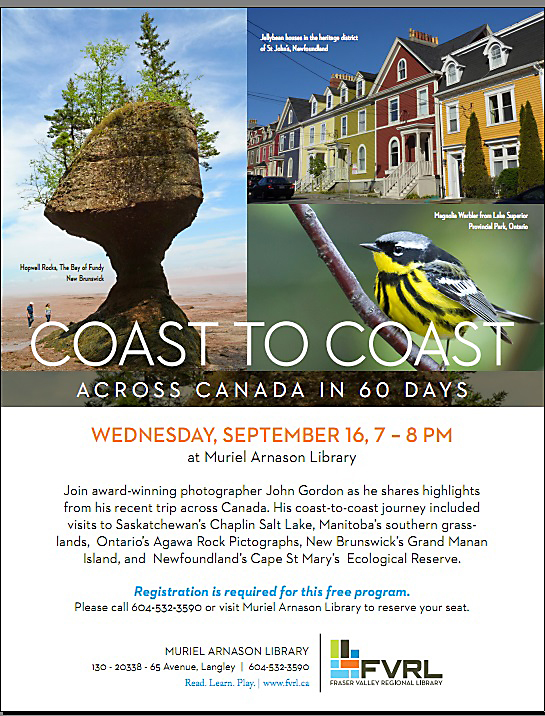 Before I made my way out to photograph the flood tide I made sure my camera and lens was calibrated. I used the Nikon D300s and the 500mm F4 with a 1x4 converter. As you can see these shots are sharper than the previous blog with just a moderate amount of sharpening.
I found out later that I had missed the Hudsonian Godwit and the White-fronted Geese which tells me I should have waited for the ebb tide when the Black-bellied Plovers returned.

Beside the birds, it was good to meet up with a number of birders I hadn't seen for months so that was good and as is the case with birding there is always another day.

Note:
The apparent lack sharpness in the was due to the calibration or fine tuning that had been altered after I had the D7100 in for repairs. I had to use more sharpening than I would have liked to save these images. Anyway it was great to see both godwits together which make for easier identification. Thanks to Mike Tabak who birding experience helped me find these birds.

After the trip across Canada it was time for some quality family time. I had been away two months and the green green garden I had left now looked like a war zone, burnt to a crisp by the lack of rain and watering restrictions.
The hot weather also meant that any birding activity would have to be undertaken early in the morning or not at all, mostly it was not at all! Anyway July is usually devoted to my other half unless of course there is a rarity in town and then she comes along and goes biking while I concentrate on the birding. Last time I found the bird in ten minutes and she was gone for three hours!
It was also time to go BC camping and so I took the Nikon P900 in case I saw anything interesting. Here are some results.

Finally I had some time to go birding after the Labour Day weekend. I chose the ferry terminal thinking I might find the Great Egret, this Whimbrel was a nice surprise. The Egret was a no show.

"It's never too late to start birding"
John Gordon
Langley/Cloverdale
BC Canada
Posted by John Gordon at 23:43 No comments: