I had been looking for Common Redpolls for weeks. Finding a reliable report is fine but flocks tend to move around making them difficult to locate. This time I had a good lead from vanbcbirds that there had been a sighting in Abbotsford. That was on Saturday, Sunday I had other plans but for Monday I had the time to make the thirty minute trip from Cloverdale
When I arrived Mill Lake was wet and cold, even a few flakes of snow. After walking halfway around the lake without much luck I finally spotted a small flock of birds. There were perhaps twenty in total, soon more arrived and then another influx, I counted at least a hundred. They were too far away to photograph and were high in the trees against an ugly grey sky. Apart from a few Pine Siskins, a single Black-capped Chickadee and a Ruby-crowned Kinglet they were all Common Redpolls. 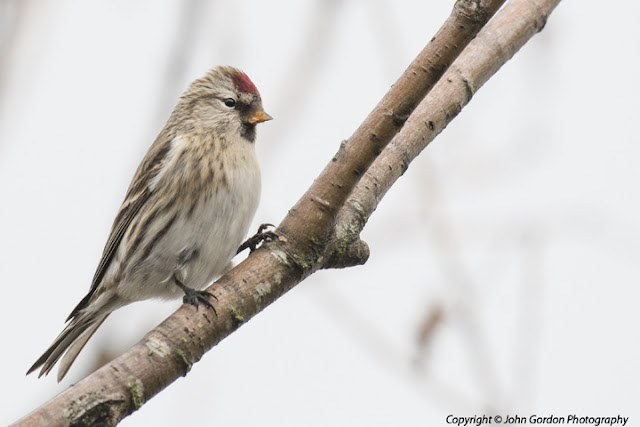 As I mentioned I had heard about the flock on vanbcbirds, a list server that notifies birders about bird sightings. Where ever I have travelled in BC, across Canada or around the world I have found an amazing network of birders willing to take the time to show complete strangers like myself around their patch, it's simply amazing. Most areas have birding sites like vanbcbirds so why not go online next time you are headed out, it's well worth it. 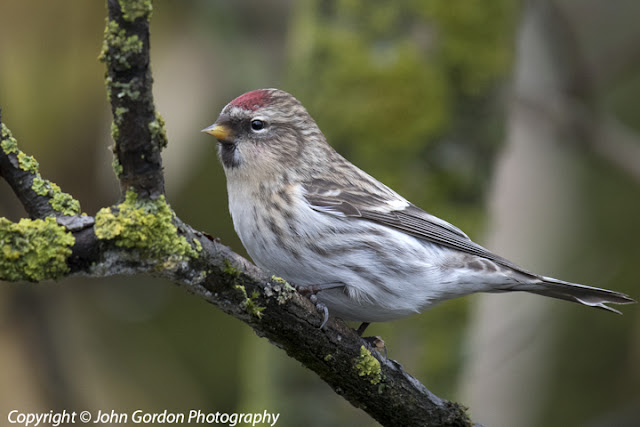 Recently I have been wondering how much ego is wrapped up in the publishing images on social media. Why do we continue to photograph a species especially one at risk when we may already have dozens images already on file? Sometimes we may happen upon a bird and the opportunity presents itself and that can be fine but when twenty or more photographers converge on the same bird day after day and when it's the same photographers morning, day and night there has to be some questions asked about the motive. Maybe they're new to bird photography and will move on to other species once they have their fill. The focus for everyone is different but meanwhile wildlife can't speak for itself. Finally it's up to the individual to become mindful the impact the pressure might have on wildlife.

Another place to find put about BC bird sightings is


The Langley Times and reporter Monique Tamminga  gave The Langleys a super write-up resulting in the book selling out at Chapters. I have now re-stocked the book. Thanks to everyone for helping making the book such a success. 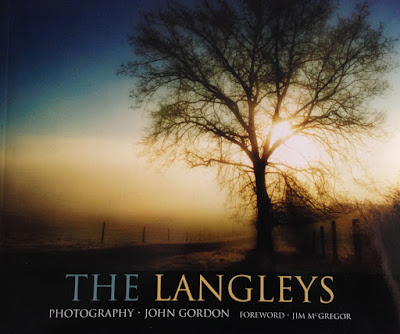 After returning from my visit to the UK I was eager to go birding again.


Apparently I hadn't missed too many birds for my year list, only the American Avocet stands out as a complete loss as it was long gone by my return.
All that remained was to catch up with the odd vagrant and newly arriving winter species. 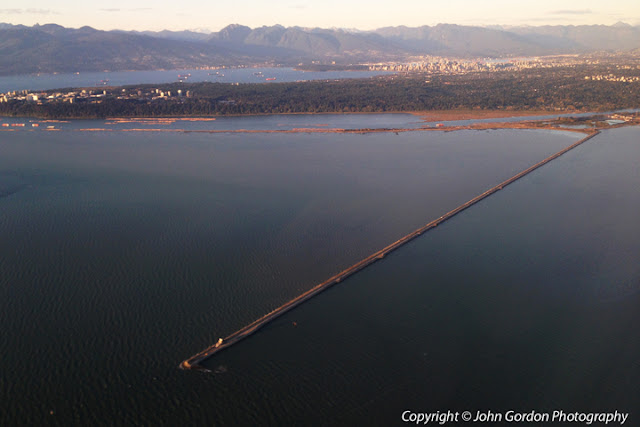 I used my iPhone for this aerial view of Iona's south jetty as I left for the UK. The Horned Lark and Snow Buntings were found halfway along the jetty on the day of my return in mid-Oct.

A few days later I headed to Reifel to search for the Sharp-tailed Sandpiper, I dipped. Just as I was leaving I watched a Sora scuttle across the shallow water. I saw it again but was too slow for a picture, besides the light wasn't great and I already have a good number of pix of the secretive rail so why not just, just sit back and enjoy the moment. Taking pictures mindlessly is like going to a concert and videotaping the show with your iPhone, really pointless in my opinion.

While chatting with birders in the UK they mentioned how they admired the majesty of the Bald Eagle. When I mentioned that one recent winter afternoon we have had over one thousand at Boundary Bay they were speechless.
Reifel Migratory Bird Sanctuary 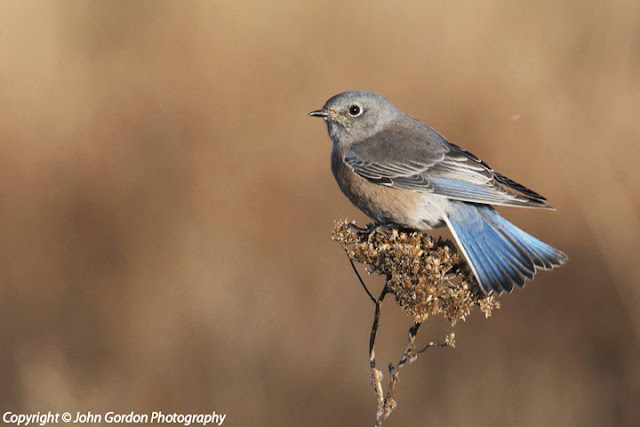 Female Western Bluebirds (Above and below) 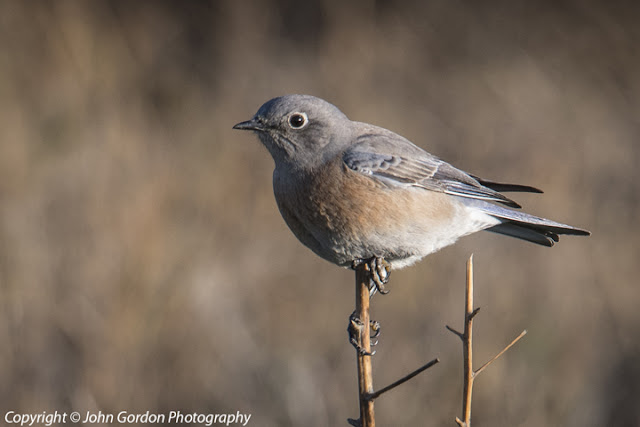 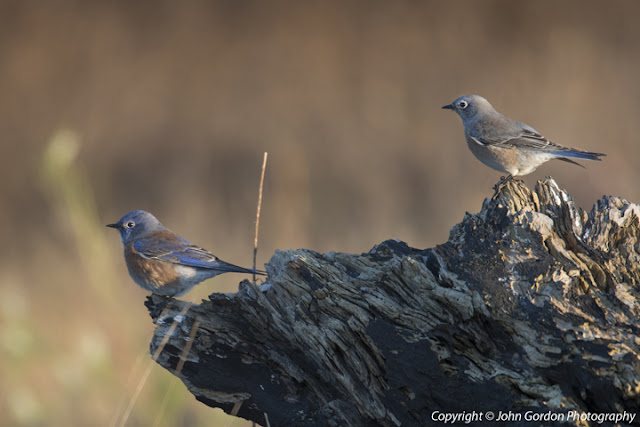 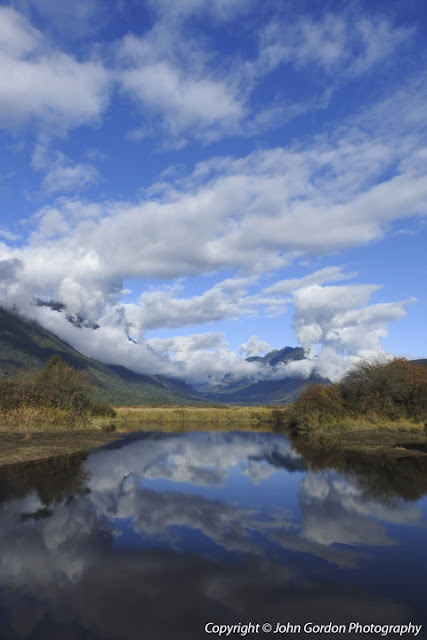 Book reprint goes up in flames for Langley photographer
The second edition of John Gordon’s picture book caught fire en route to him.

Imagine John Gordon’s horror when, back in August, he receives a call from his publisher telling him an entire reprint order of his book, The Langleys, has been destroyed in a truck fire.

Disaster might be a bit of an over exaggeration, but it was shocking news for the retired Black Press photographer who had covered many a fire call in his days working for the local newspaper.

Turns out, that on transit through the Rockies, his books – coming from Friesens Printers in Manitoba – went up in smoke.

“I was facing a total loss,” said Gordon, who originally published his The Langleys book in 2008. He sold out of the first 3,000 copies and had ordered a second printing – of another 1,000 copies – earlier this summer.

“I and 11 other authors lost their books,” he said, noting he took possession of the reprinted reprints on Thursday.

He sold out of this book almost a year and a half ago, but was constantly receiving requests for more, which prompted him to consider publishing a third book. But that, he said, was too costly and time consuming an undertaking. So, the avid birdwatcher and traveller opted instead to simply do a reprint on The Langleys.

They’ve arrived just in time for the Christmas season, he said, and “to my surprise orders have been pouring in even before the book was delivered, word of mouth and social media are wonderful things.”

Gordon noted that a further reprint may be needed sooner than he expected.

He also published another book about Langley called Familiar Places: Familiar Scenes, which was released in 2004 and sold close to 3,000 copies.

So what inspired these books. Many things, he said. But most of all it’s the people and the scenery of Langley.

“That was the case when I first visited Langley 20 years ago,” Gordon said, explaining the inspiration for his $20 paperback book.

“As I drove along the Fraser Highway heading east and crossed over 192nd Street before me was Langley. Not only was the community nestled in a picturesque valley but a majestic snow capped Mount Baker completed the scene. I now know it as a community of communities, a place where people still greet each other by first name and where town really does meet country.”

In this book, he attempted to gather a collection of photos showing off the beauty that initially attracted him to settle in the area. 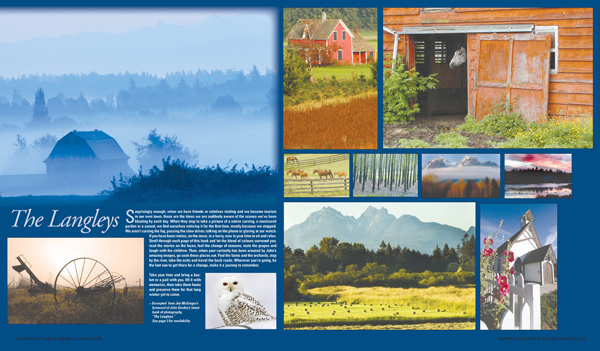 As he sat, staring at the computer screen and watching his collection of photographs originally come together for this book, he said: “I can’t stop thinking about how lucky I am to work and live in one of the most beautiful corners of British Columbia.

“Whenever I return from a trip overseas, I am always grateful to get home. There is something about the mountains that surround us, the proximity to the mighty Fraser River, the parks and trail system, the fresh farm produce, the list goes on and on. But most of all, it is the residents of Langley who top the list as reasons to live and work here.”

More information on Gordon and his book are available online at: www.johngordonphotography.com by calling to 604-533-7171.