Jan 24th 2013 Queen's Park, New Westminster, British Columbia.
I hadn't intended going back to photograph the Red-flanked Bluetail at Queens's Park but I had an assignment to find and photograph Vancouver Island birders. Those pictures will accompany a story to be published in community newspapers.
Hundreds have visited Queens' Park looking for the diminutive Bluetail and today was no exception. While searching for my Vancouver Island birder I met three American 'Twitchers' with impressive ABA list numbers. Steve Moore (785), Bill Drummond (795) and Tom Prince (771)
The three friends had had just flown 3000 miles from Massachusetts to add the Red-flanked Bluetail to their list.
While I was there I grabbed few images of a Brown creeper, a Chestnut-backed chickadee (from a previous visit) and a few more shots of the Red-flanked Bluetail.

Listening for Birds at Green Timbers


As I walked downhill to the pond It wasn't too hard to conjure up a picture of Surrey a hundred years ago. There was the snow on the evergreens and the muted reds of the Alder was mesmerizing and then I heard BIRDS!

It was getting close to deadline so I rushed home and downloaded the Red-flanked Bluetail to the Vancouver Sun and within an hour  the web version was up and next morning other pictures were on the Vancouver Sun front page.
As of today there have been 800 page page views on this blog from all over the world. It just goes to show how much interest is out there when a rare bird comes to town!

Jan 15th 2013 Queen's Park, New Westminster, British Columbia.
The  B.C. Canadian and West Coast birding community was buzzing with excitement over the past three days of the first ever sighting of a Red-flanked Bluetail in British Columbia and Canada. 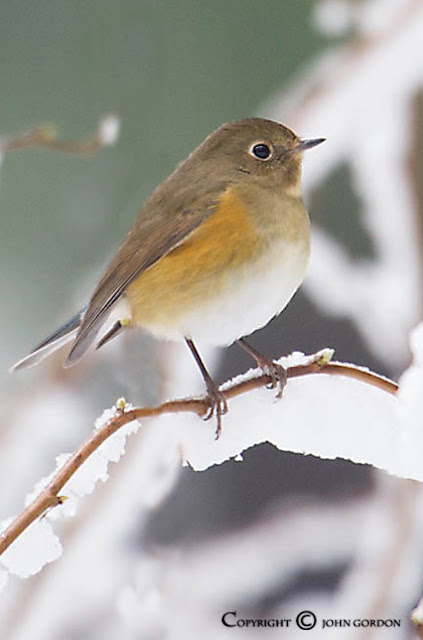 The bird has drawn twitchers from various parts of Washington State as well as birders from around the province. At one point sixty people with binoculars and cameras were observing the bird.

An excellent detailed account of how and who located the bird can be found below.

Note: After I left Queen's Park I decided to visited Green Timbers in Surrey. I found some excellent birding and stunning scenery. The trees were laden with snow and the pond was frozen except a small part kept open by Mallards. Varied thrushes were feeding on the ice (on what I am not sure) and Ruby crowned kinglets were in abundance.  I'll post those images later tonight when I catch my breath.

Jan 12 2013 Boundary Bay, Delta B.C.
Cold and Sunny.
This Short-eared owl was hunting Townsend's voles and lost its fear of people so much so it landed within feet of a large crowd of onlookers.

Jan 12 2012 Boundary Bay 72nd Ave, Delta B.C.
Sunny and Cold
Talking to other birders it is clear that Boundary Bay is regarded as one of Canada's premier birding hotspots in Canada. Simply, there are birds everywhere!
My first shots of the day were taken within site of the parking lot. In an an joining field a Short-eared owl is being harassed by a Northern harrier. A few yards further along a flock of Purple finch feed on winter berries, picking out the seeds from the pulpy outer portion. On a tall electrical tower a Peregrine falcon launches itself in search of prey.
Close-by another solitary Short-eared owl put on a show for everyone including the many children who had been brought to the dyke to see the Snowy owls. Eventually the short-eared owl landed close enough to take head shots. Many didn't notice the long-eared owl which came out to hunt just as the sun kissed the horizon. To find three owls in a such a small area is quite remarkable!
In a few short hours and without too much effort and expense these images were captured, closing out another picture perfect day on the West Coast.
See next blog for Short-eared owls photographed the same day.

Jan 10 2013 Burnaby Lake, Burnaby, British Columbia
In the Vancouver area the White-winged crossbill is normally found at higher elevations where it feeds on the conifer seeds of the Western hemlock and Spruce. For whatever reason a flock of perhaps 30-40 of these colourful birds have spent the past month or more at Burnaby Lake, a lowland lakeside location where they are very rarely or if ever seen. The flock was spotted during the Audubon Christmas bird count and may have otherwise been overlooked.
As normal with rare or unusual bird sightings, scores of birders and photographers have been trudging alone the trails at the base of Piper Ave to view the birds. For many of us the bird is a "Lifer" which with the Bramble earlier in the day made it two for the day.
I hope the birds stay around for a few more days as I hope to get some better images as these were taken from quite a distance.

Jan 10 2013 Vancouver B.C
Cold, sunny and partial cloud.
I really like the word Bramble. Me thinks it would be a good name for a folk-rock band, The Brambles!
So when I heard that a Bramble had been seen at a backyard feeder in Vancouver I decided to go and investigate.  It would be my fist sighting of a rare Eurasian visitor. This image is the result of a mornings shoot before leaving to photograph the White-winged crossbills at Burnaby Lake. I think with a little more effort a more satisfying shot should be possible but for the moment this is a really nice reminder of that cold morning.
A very rare visitor from Eurasia Brambling have also been recently observed in the Okanagan. Perhaps blown off course by the same storm. This bird was feeding in the company of Song sparrows, Golden-crowned sparrows, House finches, European house finches and Anna's hummingbirds.

The Brambling, which fed mainly on the ground is a wary bird. It could be difficult to spot among all the house sparrows and only occasionally stood still in the open.
A big thanks to the landowner who put up with all us birders!

A thick fog covered the landscape and for brief moment or two the sun peeks through the cloud. It was cold and dull as I poured a cup of coffee from my flask. For the first few minutes no birds were apparent but as the minutes passed the sighting of a Northern harrier and the sound of songbirds drew me in.
I decided to see what I could find ( I really need all the exercise I can get) after eating too much Gravy Bird (Turkey) and chocolates that were gifted us over the holidays. Thanks to you all, may the good cheer continue. May I also be able to fit back into my pants (trousers) again! Hmmm, probably need to going on more birding walks to lose the pounds!
Back to the birding. I was looking for the American tree sparrows that had been spotted along on 72nd and the dyke. They had been pointed out to me by photographer Raymond Ng. I wasn't really happy with my first effort so I decided to go back and have another go.


The first bird I encountered was an American bittern that was feeding in an open ditch, I stumbled on it as I followed the tree sparrows. The bird landed on a Himalayan blackberry bush for a few moments before flying off to an adjoining field. 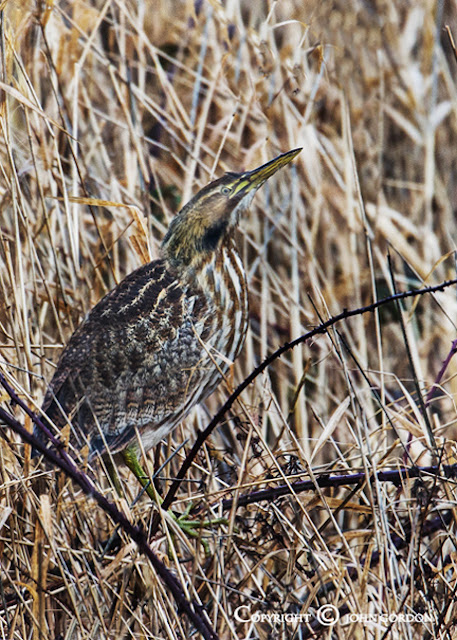 I continued walking the dyke for another hour when I again found the elusive sparrows feeding on seed. I spent the next thirty minutes following them from post to branch to seed heads where this picture was eventually taken, just four frames and then the bird was gone. The lack of sun and a temperature that barely rose above freezing meant the plants were still laden with moisture from the morning hoar frost.
Later, as I approached my car I noticed a large group of people huddled together peering at what turned out to be a Long-eared owl that had hidden itself in a hawthorn bush.


Happy Birding
Posted by John Gordon at 21:53 No comments: