I arrived on the hottest day ever recorded in the UK (38.7C or 101.66F) and the same day Boris Johnson became prime minister.
My first night was spent at the White Hart Hotel St Albans built circa 1470, unfortunately the only hotel in town without air-conditioning. Next mornings newspaper headlines included "roads melt like chocolate and tracks buckle"
Experts say that Britain can expect more and more erratic weather systems, as if it wasn't cloudy and wet enough already!


Before I go on any overseas trip I try to contact some of the birding friends most of who I have met through the online group Birding Pals. It might be the best $10 you'll ever spend.
See link for more info
Birding Pals
Before I leave I check Facebook and especially Twitter feeds as they provide plenty of good information about local bird sightings. Also most counties have bird clubs who are also a valuable source of information.

This time I touched bases with Steve and John to see if they had any ideas about what birds might be around. Last year they generously introduced me to a number of their local hotspots. The other thing I decided to do was go with just one bag of clothes, one bridge camera and a toothbrush. I took the Nikon P1000 24mm-3000mm.

My UK life list is a modest 167 so with a possible 500 plus species it stood to reasons there should be plenty of opportunity to pick-up a lifer or two.
Both John and Steve have 500 plus UK life lists and many amazing stories about chasing birds. Last year on the way to Spurn Point National Nature Reserve near Hull I sat in the backseat listening to epic twitches to the Channel and the Orkney Islands.


I knew I wouldn't have time to bird much and as it turned out I hardly birded at all. Family always takes precedent, Dad is 93 so precious moments spent with him are all important. One day we drove to seaside and parked overlooking the North Sea, drank tea, read the newspaper and watched the birds on the beach. Offshore a few Northern Gannets flew past while on the shore Oystercatchers dodged holiday makers and their pesky dogs.
On one cloudy morning on the way to pick-up the newspaper the sky was dotted with Swifts. The Goldfinche, my favourite bird flitted along the hedgerows, two great sightings before breakfast.

After shaking off the effects of jet lag my younger brother Roger took me out to Red Hill Nature Reserve, a small tract of land left to its own design. I spend a blissful afternoon there listening to the  Yellowhammers calling and a Common Whitethroat collecting food for her brood. It was a perfect English afternoon.

More about the Lincolnshire Wolds

The area comprises 1.6 hectares (4 acres) of steep chalk escarpment grassland with some scrub and 1.6 hectares of old plateau grassland, and a disused quarry with a famous exposure of Red Chalk which is rich in fossils, particularly belemnites and brachiopods. Below the Red Chalk there is a considerable thickness of Carstone, here a coarse, pebbly sandstone, and above it a thin capping of the white Lower Chalk.

Dad lives on the edge of town where there are a good number of Wood Pigeons, where Blackbirds sing all night long and Rooks sits atop chimney pots. Any of those birds would set off a stampede were they to turn up in Vancouver.
Around Louth's church were the unmistakable sounds of Swifts (Apus apus) At first the birds were scattered across the sky, flying low as the church's spire became enveloped in mist. Eventually twenty of more flew in perfect formation before splaying out in all directions. Their calls rang out louder than ever as they skimmed over the row houses. What an amazing spectacle, indelibly etched in my birding memory bank. My guess is most were recently fledged, fattening up for the long migration to Central Africa.

It is a summer visitor and passage migrant, with birds breeding widely, although it avoids urban and mountainous areas. It winters in Africa, south of the Sahara.

Previously widespread across Britain, yellowhammers are now on the "red list" of birds who are now a "conservation concern"


Finally I visited Frampton RSVP and spotted a Ringed Plover, a cousin of the Little Ringed Plover, which until I entered it into eBird didn't realize was a lifer. The other life was the Turtle Dove, the second of the trip.
Familiarity is the word here, I marvel at all the birds whenever I visit somewhere new and there really is something magical about that.
So until next time.. good birding.

Before heading toward Golden and the annual British Columbia Federation of Ornithologists (BCFO) conference fellow birder George Clulow and myself took the opportunity to visit a few select locations on the way. Golden is a long drive from Langley so we decided to take our time. It not only broke up the driving but provided us with a variety habitats to explore at a leisurely pace.
Cheam Lake near Chilliwack was the first stop followed by an amazing mornings birding with Alan Bergen. The lakes around Merrit and Creston's Duck Lake were just a few of the places we visited. George's finely tuned ear also got me onto numerous species especially my nemesis the Veery, a bird we heard but was yet to see. A secretive species at the best of times it remained off my life list until one turned up in Fort Langley July 14. I was my 400th Canadian species and therefore a special bird, especially as they are not often encountered in the Lower Mainland.

Our first stop was at Cheam Lake near Chilliwack. We had great views of an Osprey fishing, a Black-headed Grosbeak collecting grubs as well as an interesting selection of dragonflies.

After Hope and an early start we made our way up the Kane Valley. We met up with a local birder who generously showed us one of his favourite spots. We walked through pastureland, flowering meadows, a small marsh and an aspen forest. There were plenty of decaying trees for cavity nesters like Mountain Bluebirds, Red-naped and Williamson's Sapsuckers. The wild grasses and open spaces were perfect for Vesper, Lincoln's and Savannah Sparrows. At the time of our visit no cattle had been sent out to graze so hopefully the ground nesters will have fledged by that time. Our almost four hour walk produced forty-seven species.

We had another two stops near Merrit. First the Laurie Guichon Memorial Grasslands Interpretive Site where the usual Ruddy ducks were absent. We were however rewarded have excellent views of the resident Osprey which has been provided with a platform to nest on. There are a number of world class fly fishing lakes close by which I am sure raises the ire of every angler when they see the Osprey flying away with a fat trout. No catch and release for the avian fisher.

A flat tire at Tunkwa Lake saw us making a detour to Logan Lake. Following repairs we went for lunch at the local lake where we had some really good birding along the riparian area and again in the lake itself where George spotted a Canvasback with a brood, something I might have easily overlooked.

We broke the journey at Salmon Arm which gave the opportunity to bird three separate locations. We picked up new trip species at most all of them. The highlight for me a least were the two-hundred or so Black Swifts that were feeding over the lake and above our heads. I had never seen so many, the low cloud and drizzle had kept the insect hatch low enough for us to observe the birds and even grab a few pictures. Note the bird in the photograph below is an immature. 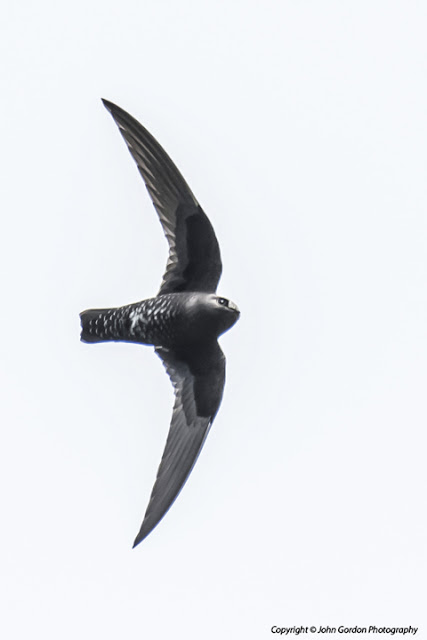 Who could miss a big white American White Pelican. A small flock of Ring-billed Gulls and a pair of  Forster's Terns and numerous Eastern Kingbirds were just a few of the species added to our lengthy list now topping 100 species.

'Sweet Light' pours through the folds of mountains to the west. On closer inspection were various species of ducks including Blue-winged Teal were found foraging round the lake edges.

After some excellent birding on the first day of the June BCFO Golden Conference those birders that had signed up for the Moberly Marsh Sunday morning walk were well prepared with rain gear and gumboots.
Despite rain and grey skies the morning immediately kicked off with a great find all thanks to the finely tuned ear of Adrian Leather. We hadn't gone more than a few hundred metres when he was quickly onto a pair of Le Conte’s Sparrows. We eventually heard a total of five and that was just along our pathway. How many others were spread out over the many acres of fields would be interesting.

Not much further along from the Le Conte's our group were lucky enough to observe a small colony of Bobolinks.
Such a treat for the Lower Mainland birders who would normally have to visit the Okanagan for any type of view. The long uncut meadow grasses harboured numerous species of flowers and an incredible amount of insect life.

The owner of the field who we eventually met at the end of out walk has the insight not to mow his fields until after the nestlings have fledged. I hope a letter of appreciation from BCFO goes to him.

As the group walked on I became distracted by a movement on the bushes, it was soon obvious that a pair of Bobolink were courting. Although I missed the birds passing food to each other it does show an interesting interaction nethertheless.

The Nikon D500 and the comparatively lightweight Nikon 200mm-500mm F5.6 is the perfect set-up for a birder on the move. It allows for long distance hikes, composing on the fly and the capture of a wider variety of images than carrying a fixed 500mm or 600mm with gimbal head and tripod. It's also far easier to travel on planes and so far I haven't noticed much if any difference in image quality. Where the more "professional" set-up wins is when the photographer goes after a specific subject matter and there may be much standing around waiting for the quarry.

Already LeConte’s and Bobolinks and we had only been birding thirty minutes. More great sighting were to come including a nest with a Western Wood Pewee and a squabble between a crow and a pair of Bullock’s Orioles which led to some interesting interactions. No one seemed to worse for the fracas. 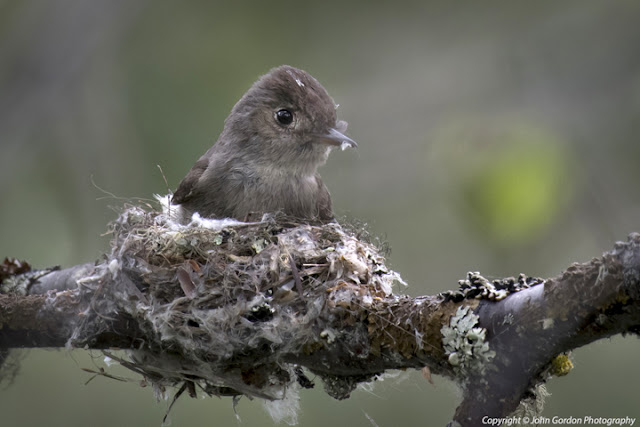 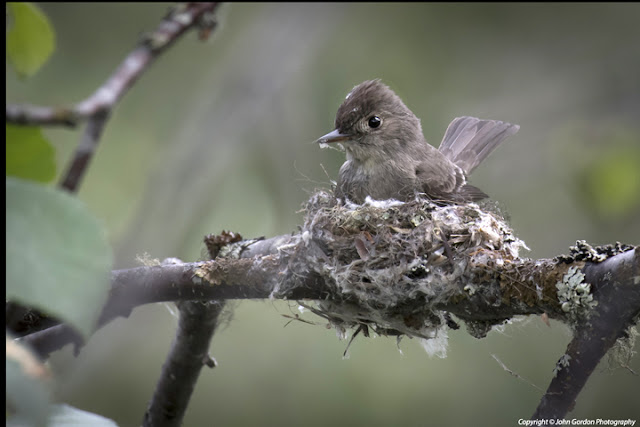 Sixty-five species later a soggy but contented group of birders returned to our cars but not before spotting a pair of Sandhill Cranes, a highlight for many in the group.
A big thanks goes out to our guide Verena Shaw for arranging permission to access the private property and the BCFO for making it a memorable convention.