The annual Manning Park Bird Blitz is an event to look forward to. The chance to bird where coastal rainforest and dry interior overlap is a special treat and being only three hours from Metro Vancouver  is a relatively short drive. There is plenty to see. Two hundred plus bird species have been recorded in the park as well as wide variety of flora and fauna.
The weekend was organized by the hopemountain.org
Please visit their site for other events.

The bird blitz began Friday evening with an orientation and slide presentation. Friday night's speaker was Melissa Hafting (AKA Birder Girl) and Saturday Vaseaux Lake Bird Observatory (VLBO) director Sharon Mansiere. Hafting spoke about the importance of protecting the boreal forest and the many species which rely on it while Mansiere spoke about everything from climate change to bird collisions eventually bringing us all up to date on the many activities undertaken by VIBO
Saturday attendees included many families with children along with a fair smattering of intermediate and experienced birders. It was heartening to see so many youngsters engaged in outdoor activities.
Despite the occasional thunderstorm throughout the weekend the event went off like clockwork.

Saturday morning the seventy plus attendees broke into groups with the idea of covering as much of the Manning Park as possible. The organizers had chosen a dozen or more trails to explore. Each group was led by an expert or intermediate birder to aide newcomers with identification. I chose to bird Strawberry Flats with naturalist Bill Kinkaid. An all-round naturalist Bill knows his flora and fauna. Whenever the bird activity died-off he would point out plants and critters, the most striking being the four impossible to photograph Snowshoe Hares that were hopping around in a forest glade. The hares were a lifer for me.
Along the trail we began to find Canada Jays, Black-capped Chickadees, Red-breasted Sapsucker and the most common bird, the Hermit Thrush. At this higher elevation the Swainson's Thrushes were for once out numbered by their close cousin. It took awhile to tell the songs and calls apart when both birds were present.
As we made our way along the trail one of our party spotted a Spruce Grouse not more than a few metres away. Prior to the sighting we had been listening to another grouse drumming in the forest. The grouse rather than melt away into the understory drew closer to check us out. It was an awesome being so close, an experience that will be etched in my bird brain for some time to come.

The grouse was fearless, at one point the bird actually pecked one of the group. After spending a good ten minutes watching the bird we began to leave, only to be stopped in our tracks. The grouse was barring our way obviously upset by our intrusion. Eventually one by one we skirted around the bird, even then it continued to chase us for another twenty metres.


We continued to find some good species, a nesting Rufous Hummingbird, a Northern Pygmy Owl, a Red-tailed Hawk and really good views of an Olive-sided Flycatcher.
Overhead were 5 Black Swifts and as we reached the ski hill we spotted both Tree and Barn Swallows. This was best place to photograph the Hermit Warblers which were perched on short pine trees next to the ski run. In the forest they were very vocal but almost impossible to see let alone photograph. A list of species seen on the three hour walk can be seen at the bottom of the blog.


After a leisurely lunch I joined another group and we birded Boyd's Meadow where the mosquitos were thick in the air. After about two kms we came to an open area where we heard a woodpecker. Soon we spotted a Three-toed Woodpecker peeling off bark and after a few minutes it briefly showed itself long enough to get the image below. We walked a little longer but the mozzies were biting through our clothing so back to the car ASAP seemed the best idea. On the way back we picked up an Osprey, a Hairy Woodpecker and a Spotted Sandpiper.

Broaden your creative approach to photographing flowers and
the landscape they inhabit. Learn about camera techniques,
lighting, exposure settings, and how to make your photos stand
out. Bring a camera or smart phone, a 12”x12” sheet of aluminium
foil, and something to lay on. A tripod would also be helpful.

Campbell Valley Park the forest was alive with bird song. I quickly noted half a dozen species by sight but there were many sounds I just couldn't make out. My target bird for the day was the Red-eyed Vireo and not being familiar I played a variety of calls and songs on my iPhone to familiarize myself. Finally after a few hours in the forest I heard the call I was hoping for, then I heard it again but as much as I tried I couldn't get on the bird. Despite that I spent a relaxing morning forest bathing and listening to bird song.

The Gray Catbird is very localized in the Lower Mainland, Catbird Slough and Grant Narrows in Pitt       Meadows is the best place to spot them where in a few hours I saw six. They usually arrive around mid-May.

***
One of my favourite walks is the Brydon Lagoon forested area. Most days during the winter months an Anna's Hummingbird can often be found on a single bare branch hanging over one of the pathways. During the colder months some thoughtful person takes the trouble to replenish a feeder close to where the bird patrols. I'm pretty sure this is the same bird but this time he's in full display mode, no doubt trying to attract the female of the species.
The Brydon Green Heron was so pre-occupied stalking prey it took little notice of me. It was just by the car park where a small creek flows into the retention pond. I've seen it there a number of times along with small numbers of Common Snipe.

Every year a pair of Ospreys nest at the Grant Narrows. During the winter storms their regular nesting platform collapsed. The new one was erected by volunteers but has not been utilized. They're now trying to raise a brood next to a very busy boat launch.
If that wasn't bad enough a number of photographers have been coming every day. Most have been behaving responsibly by standing back a respectable distance, others not. Those who stand back are rewarded with a shots of the male bringing food for the sitting female. Unfortunately quite a number stand way too close, forcing the male away from the nest. It is the male who brings food to the female so she can stay at the nest and incubate the eggs.
Eventually I lost patience and asked two female photographers to back off and sure enough they did and within a few minutes the male had returned with a fish.

House Wrens have never been common in the Lower Mainland except for a few known regular haunts. This year there have been many more reports including several locations in Langley and White Rock. That's great news for the wrens but not so good for the swallows whose boxes are becoming increasingly populated by the wrens. A single wren will use as many as eight nesting sites to attract a suitor.


Richmond Park East is a seldom visited park. A breeding colony of Orange-crowned Warblers is the main draw. The Richmond Nature Park consists of 200 acres of raised peat bog habitat that once covered large portions of Lulu Island. Thankfully no dogs are allowed so one can walk without being putting your foot in you know what.


A stop off at Colony Farm turned up a pair of very confiding Eastern Kingbirds. They were first observed bathing in a ditch. If that wasn't close enough they turned up again at the duck pond but this time they flew incredibly close, an awesome experience.

A few shots from under the power lines at the base of Mount Seymour. 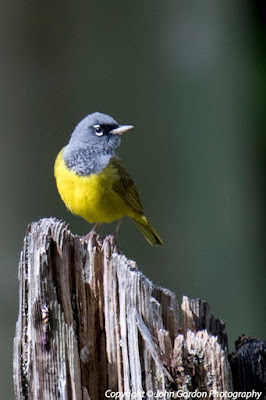 I spotted this Townsend's Warbler collecting what looks like dog hairs from the trail near the Mount Seymour parking lot. Birders crave good views of birds doing what birds do and this was a most satisfying look.
These two images of the Willow Flycatcher are the best I have ever managed of the species. I can now delete all the others so so files and free up some much needed space on my hard drives.  These images have a nice catchlight, the plumage is well defined and the background is far enough away as not to distract. 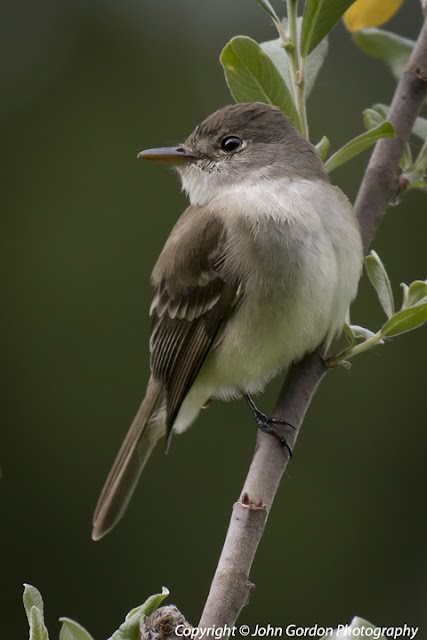 *Since I started on this blogs weeks ago the Osprey have at least one offspring perhaps two so if you do go keep a little distance, no photo can be that important.