The Least sandpiper is the smallest Pacific peep. It feeds in and around tide pools, picking off insects wherever they can be found. This particular bird came within ten feet of me, too close even to focus, it allowed me to watch it feeding, preening and sleeping. As I lay motionless it was joined by five Semipalmated plovers, a small flock of Pectorals and an American golden-plover.
I was able to back away from all the birds without disturbing their behavoir.
Posted by John Gordon at 22:29 No comments: 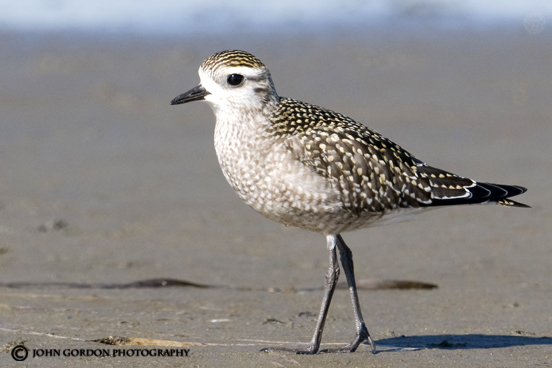 The breeding habitat of American Golden Plover is Arctic tundra from northern Canada and Alaska. They nest on the ground in a dry open area. They are migratory and winter in southern South America. They follow an elliptical migration path; northbound birds pass through Central America about January–April and stage in great numbers in places like Illinois before their final push north. In fall, they take a more easterly route, flying mostly over the western Atlantic and Caribbean Sea to the wintering grounds in Patagonia. (Wikipedia)


The bird has one of the longest known migratory routes of over 25,000 miles. Of this, 2,400 miles is over open ocean where it cannot stop to feed or drink. It does this from body fat stores that it stocks up on prior to the flight. It is a regular vagrant to western Europe.
Posted by John Gordon at 22:08 No comments:

Moments before I had just finished photographing a small flock of Black-bellied plovers when I saw Jim a few hundred feet away. I was careful not to disturb his time with the birds when he beckoned me over to share the experience..how cool is that!


There were two birds resting and feeding along the tideline. The American golden-plover is not that common and among the thousands of Black-bellied plover (Pluvialis squatarola) spread out on Boundary Bay they can easily be overlooked. This is where the experience of knowledgeable birders like Jim and Mike Tabak can point out the finer details between the species to those of us are 'shore bird challenged' During a four hour photo session I also photographed a third plover, the Semipalmated plover (Charasdrius semipalmatus)
Another great day out which ended with a glorious Fall sunset and a few more shorebirds, including a "lifer" which i'll post in a second blog.

American Pipits (A master of disguise)

Two "lifers" is two days make for one very happy birder. After spending the morning at Blackie Spit with the Langley Field Naturalists (see Anne's blog at bottom of page) I went to the base of 104th St on Boundary Bay in search of American Pipits. A flock of 40 were feeding on insects among the seaweed left by the receding tide. Other birds noted were Black-bellied plover, Western sandpiper, Least sandpiper and Northern harrier. What is apparent for their survival is how well camouflaged (see pic #1) Pipits are as they comb the beach for insects. The ever present Northern harrier kept the flock moving each time it would glide past making photography somewhat of a challenge. As soon as the  birds would come into range for a decent shot the silhouette of the Harrier would scatter the birds only for them to slowlymake their way back to my hiding spot. These shots were taken over a one hour period.
To see more of my photography please visit or sign in with your Google or Yahoo account or go to blog and links at

Some of the birds seen at the Blackie Spit walk.

For anne's account of the day see link below

This photograph of what I think is a Glaucous-winged gull was taken at Victoria's Beacon Hill Park in 1984. At the time it made me chuckle (it still does) so when I came across it last week during a cull of the thousands of slides I had shot between 1983-2000 I thought it deserved to see the light of day!
I was shot on Kodachrome 64. I went digital in 2000/2001 shooting a D1x moving on to a D2x and am currently using the D300 and D300s. My first digital camera cost $6500, today a better file can be produced with a $600 Nikon D3200. 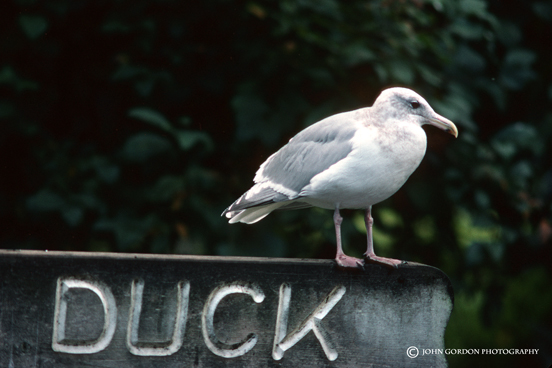 In search of the Green Heron

A "lifer" is birder terminology for finding a new bird for one's checklist. I had heard one had been seen feeding on frogs and fish at Burnaby Lake Regional Park. Having never seen a green heron before it was with much excitement that soon after I arrived the bird flew in to feed on fish and frogs. The Green heron is at its most northern range in British Columbia and will head south before the first frosts arrive, this bird is thought to have been raised in one of the lakes tributaries.

The trees at Iona were alive with waves of Yellow-rumped (mostly Myrtle) and the colourful Yellow warbler.  One of the Yellow warblers had a band (see pic) which is not unusual as the area is used regularly to collect date on migrating songbirds.

Sept 14, 2012 Blackie Spit, Crescent Beach Surrey B.C.
The ring-billed gulls were hanging around as usual, flitting from post to post. Here are some sunset shots with them included as well as a few Greater yellowlegs. 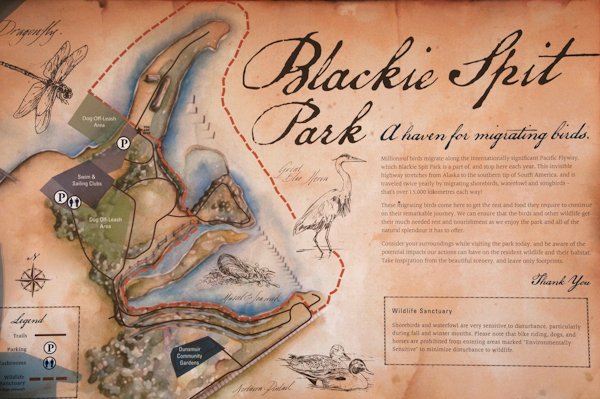 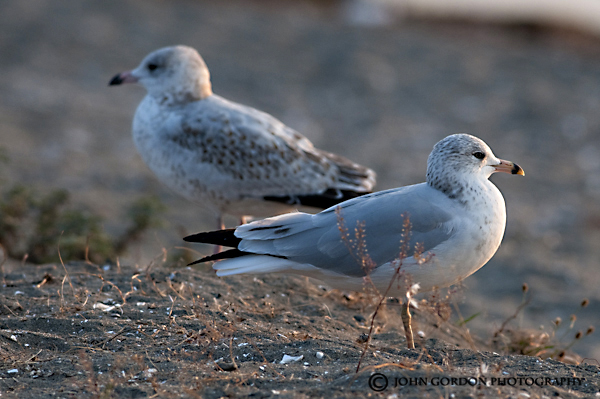 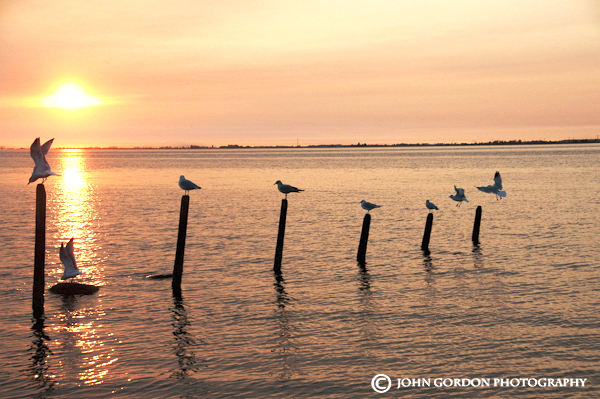 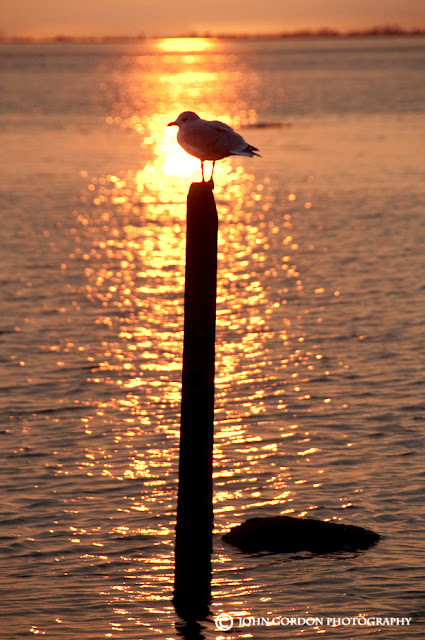 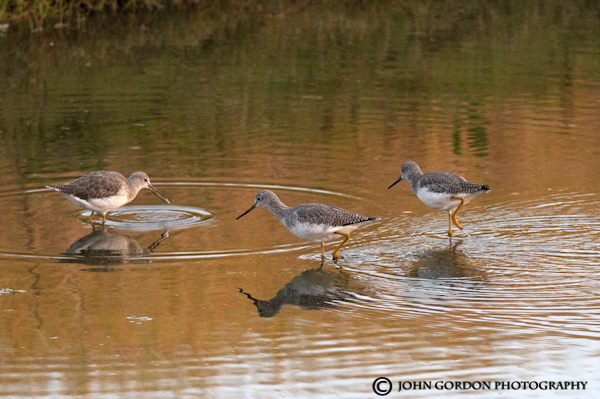 A Great-horned owl draws a crowd

Reifel B.C.Sept 7 2012
It was past 9 a.m. by the time I arrived at the George C. Reifel Migratory Bird Sanctuary. Today I was on the look-out  for a Great-horned owl. After about ten minutes walking along the outer trail I spotted him perched in a fir tree. However, no sooner had I arrived he took off. I double backed to a spot where it had been previously seen roosting and sure enough there he was. Originally the bird was facing away which made photography impossible. After about thirty minutes it started preening and slowly turned around to watch a squirrel feeding on the ground although here, he appears to be looking directly at me.

A male Northern flicker poses for the camera.

Not One Merlin But Two!

The first Merlin I ever saw was during the 2012 birdatlas count in the Chilcotins. It was backlit and cloudy and far way, it quickly took off, not a really good sighting by any means.
Fast forward to Boundary Bay at the foot of 104th St. While on my way to photograph shorebirds I noticed this bird in a fir tree next to the parking lot. The Merlin had caught a Savannah sparrow. A few hours later at Reifel I had only just entered the sanctuary and there was yet another Merlin.

As a relative newcomer to"birding" (I've been watching birds for years but had no idea what most of them were called) so finding new species is always an exiting moment.
Trying to differentiate the many members of the Sandpiper family is probably up there on par with figuring out the Flycatchers ....but thanks to many knowledgeable B.C. birders like Mike Tabac and Gareth Pugh I can now go ahead and post my latest pictures without making a complete fool of myself.
The problem with Sandpipers is that until you see them yourself the differences are very subtle and no guide can ever prepare you beforehand. Different kinds of light can also play tricks on coloration as well time of year, birds in spring breeding plumage can be quite different than those returning in the autumn. By the time you see these images these birds will be on their way to Central and South America.
Enough idle chatter, here are a few pix.

Sandpipers are a large family, Scolopacidae, of waders or shorebirds. They include many species called sandpipers, as well as those called by names such as curlew and snipe. The majority of these species eat small invertebrates picked out of the mud or soil. Different lengths of bills enable different species to feed in the same habitat, particularly on the coast, without direct competition for food.

Very similar, but look at the beak for starters!

For more information about this location see link below:
reifelmigratorybirdsanctuary.com
Posted by John Gordon at 23:09 No comments:

August in British Columbia has been so warm that it was a welcome relief to head out to Boundary Bay where a cool breeze beckoned.
Flocks of Mallard and other assorted ducks use the calm waters of the bay to complete their summer moult. In some places the sand is so covered in white downy feathers that it looks like the sandy beach is covered in snow.
Along the waterline Black-bellied plovers, Sanderlings, Western sandpipers and a few Black turnstones stop over to feed and refuel before continuing their journey along the Pacific flyway to Central and South America. Some birds will cover as much seven thousand kilometres before reaching their destination. Further up the beach in small pools of brackish water trapped by earlier tides a pair of Least sandpipers dart quickly from tussock to shallow pool feeding on sand flies and other insects. The diminutive little birds freeze and crouch as a Northern harrier glides overhead, only to carry on feeding when they feel the danger has past. I spend five minutes or so with the birds, eventually they are only a few feet away.
johngordonsphotography