Mexico is renowned for its birding. The avifauna of Mexico includes a total of 1118 species according to Bird Checklists of the World. Since that date, three additional species have been added. Of the 1121 species, 83 are rare or accidental and 10 have been introduced by humans. These numbers change and chop as the 'lumpers' and 'splitters' continue to alter the record books.
Most don't care either way and I for one prefer the enjoyment of observation. It was with this in mind when I joined up for my very first overseas birding tour.


The Trip began on the Cozumel Island. After a long flight down from Vancouver via Mexico City  and Cancun and a late night ferry crossing we were still up bright and early next morning at 5 a.m.
The goal was to bag at least two of the Cozumel endemics. They being the Cozumel Vireo, Cozumel Emerald and the Cozumel Thrasher, the latter the most critically endangered bird in Mexico. The last credible sighting was in July 2004 with a possible sighting in 2007. John Gordon

Note: Part of Adrian's account will appear in subsequent blogs from the  2018 Mexico trip, therefore there may be some overlaps. I had already published my photos when Adrian sent me this account which you must admit is a far better account than I could ever manage. Enjoy!

Of the three endemics on Cozumel, the Cozumel Thrasher (critically threatened) may already be extirpated due to a tropical storm that wiped out most of its habitat. The two remaining are below.

Nine BC birders joined birding guide, Eric Antonio Martinez, and driver, Ramon Granados to roam Quintana Roo, Yucatan, Campeche, Tabasco, and Chiapas (Northern). We even sneaked into Guatemala. Birders were John Hodges (Roberts Creek), Mark Yunker & Jan Erasmus (Brentwood Bay), Ed Jordan (Quadra Island), Val George (Victoria), John Gordon (Langley), Jerry & Lynne McFetridge, and Adrian Leather (Quesnel).
Eric Antonio Martinez constructs amazing itineraries, with an exciting variety of habitats, offering the prospect of seeing and hearing new species.
Looking back, I can see a theme for each trip. My introduction to Mexican birding was via Luis Morales, and Mark Stackhouse, who showed the beauty of birds in Jalisco, and Nayarit. Oaxaca 2016, in Eric's own neck of the woods, was a bit of a lads trip, particularly as we spent the first week birding alone, before joining Eric. The trip to Southern Chiapas in 2017 was an all-out adventure, culminating in an epic hike on Volcan Tacana, near the Guatemala border. The 2018 trip to the Yucatan Peninsula, and Northern Chiapas could be characterized as birding among the ruins, or walking through your dreams.


The mainly flat limestone Yucatan Peninsula is divided into three states, Quintana Roo (roo being pronounced as ro in rock), Yucatan, and Campeche. As we headed to Tabasco, and Northern Chiapas, we skirted only a few kms from the northern border of Belize. Some of the prime birding sites are among the Mayan ruins, so this trip was a dream for birders, and historians.
Having landed in Cancun, we drove to Playa del Carmen to catch a ferry to Isla Cozumel. A two hour crossing saw us dock in Cozumel around 1 a.m. Cozumel seems to sell itself on a ticket of quiet sophistication, with the predictable row of expensive stores waiting to lure shoppers from the monstrous cruise ships. Cozumel, although close to the mainland, has a quite unique avifauna which makes it a very attractive birding destination. We listened to 3 Yucatan Nightjar in the grounds of our hotel in San Miguel.
An early meeting in the hotel lobby saw us heading to an Oxxo for supplies. Oxxo is a sort of Mexican 7-11, and it is ideal for early morning coffee and snacks. We headed to an abandoned subdivision, more a subdivision which never really materialized. The streets and sidewalks provide birding boulevards, ideal for the international birders who flock here. We walked the subdivision slowly, hearing our first Caribbean Dove. 2 Yucatan Woodpecker eventually provided good views. 3 Cozumel Emerald were a treat. Northern Beardless-Tyrannulet, and Caribbean Elaenia made the list. Birding in the subdivision was great fun, with lots of action.
We added Rufous-browed Peppershrike (Cozumel), Yucatan Vireo, Cozumel Vireo, 5 Cozumel Bananaquit, 5 Blue-grey Gnatcatcher (Cozumel), a Western Spindalis (Cozumel), and a House Wren (Cozumel). Other goodies were 3 Black Catbird, a Hooded Warbler, and 2 Tropical Mockingbird, which became known as "Trop-Mock" for the rest of the trip. There are so many Cozumel specialties, and/or subspecies, that it became the standard joke to add the word Cozumel to anything.
A refreshment stop @ Alberto's Beach Bar added some Vaux's Swift (Yucatan), and a peach of a Yellow-throated Warbler was posing around the palms and beach furniture.

Our next stop was Laguna Columbia, a few lively flooded ponds. 45 Black-bellied Whistling Duck were present. Among a variety of herons, and egrets, we noted a Least Grebe, a Purple Gallinule, 15 Northern Jacana, and a great find was a Smooth-billed Ani. 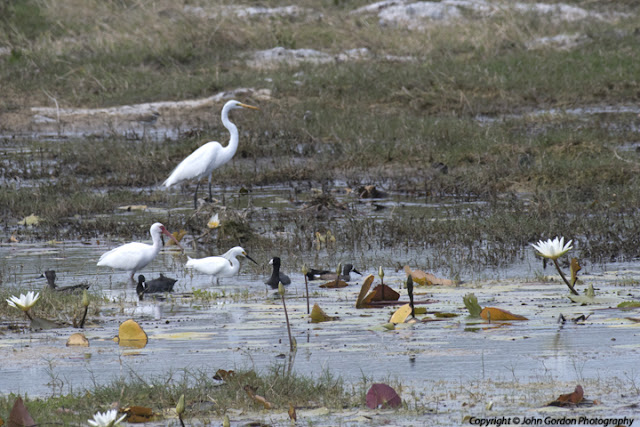 We made an early evening visit to La Planta de Tratamiento de Aguas Residuales de San Miguel. The star attraction at the sewage plant was Ruddy Crake. We heard approx 10, and saw 4 crake bathing in a small pool of roadside sewage overflow. What definitely didn't help our birding was some lads on motorbikes who kept riding up and down the road where the crakes were trying to enjoy their peaceful bath. Eric had some strong palabras for these guys. Nevertheless, some terrific opening birding for the tour!

Next day, we made our obligatory stop @ Oxxo, en-route to the delightful village of El Cedral, a beautiful spot in the interior of the island. El Cedral was like a celebration of birding. 2 Couch's Kingbird were a much awaited lifer for everyone!

Another neat stop on Cozumel was along the entrance road to the country club, where we enjoyed a selection of warblers, and a Yellow-throated Euphonia. A pond held 23 Black-necked Stilt, with 3 Common Gallinule, 5 Northern Jacana, and 5 American Coot, which of course was converted to "Cozumel Coot". A treat here was a scope view of Caribbean Dove.
We'd had a great time on Cozumel, with intense and colourful birding. We caught the ferry back to the mainland, with a little birding thrown in around the ferry terminal.

This Yellow Warbler that had a red marking on the crown.


Often a bird would be too far or deep in the bush. These shots are some that were salvaged from the hundreds of shots taken.

I returned from sunny Mexico to snow. I know this sounds crazy but it was a relief. The scorching temperatures and 80% humidity of Southern Mexico was something else, the birding however was simply amazing. I hope to cobble together a few words and pix later.
Back home the number one priority was finding the Nashville Warbler (NAWA) that had been located at Waterfront Park adjacent to Lonsdale Quay in North Vancouver. I had only ever seen one NAWA in Metro Vancouver and that was at Brydon Lagoon so a second sighting would be a treat and a really good year bird. I am not too sure who originally found the bird but it always amazes me how such rarities are found, either by design or accident. I'll put it down to enterprise and good birding.

The previous evening a cunning plan to find the NAWA was hatched with my neighbour and esteemed birding companion Carlo G. To help save the planet we would carpool. An added bonus was the chance to add a few more birds from nearby Lonsdale Quay to bolster my Metro Vancouver year list.
Arriving at the park Carlo heard the chip, chip of the Nashville and bingo, there it was sitting atop the flowers of a Mahonia or Berberry. The plant is native to eastern Asia, the Himalaya, North and Central America and flowers early in the year. The NAWA was beautifully perched and I took seven frames while it fed on the protein rich nectar of the yellow flowers. The Japanese garden offers plenty of flowing plants at his time of year as well shelter from the elements.

We spent all of ten minutes enjoying the bird before walking over to the quay. The target birds for the year list were Pigeon Guillemot and Pelagic Cormorant. Both were present.

Our second visit was combined with a visit to Maplewood Flats and Klootchman Park. We needed scopes to view a Surfbird and pair of Ancient Murrelets.

So many birding opportunities lie ahead especially as the days warm and the soon to arrive migrants flood in through the valleys, shorelines and forests. I can't wait!

"It's never too late
to
start birding"