La Penita is the northern portion of three closely linked communities of Rincon de Guayabitos and Los Ayala to the south. Each town is quite different in character and all are connected by taking a ten peso (70 cents) taxi service. They all have good birding spots. La Penita itself has a creek, beaches and a not to be missed market every Tuesday. Here are some more of the birds I found in the community of La Penita during my stay.
By far the most common shorebird hereabouts is the willet. While it is almost impossible to get near one on the prairie breeding grounds, here in Mexico they can be seen dodging waves and beachgoers with little or no fear. Only off leash dogs send them off to a more deserted spot.
The La Penita RV Park has its fair share of Canadians escaping the cold weather. Some of them feed the hummers, making it a little easier to get some close-up shots.

As mentioned in a previous blog a creek divides La Penita and Rincon de Guayabitos. There is always something happening at the waters edge. Below a mature brown pelican snags a fish. 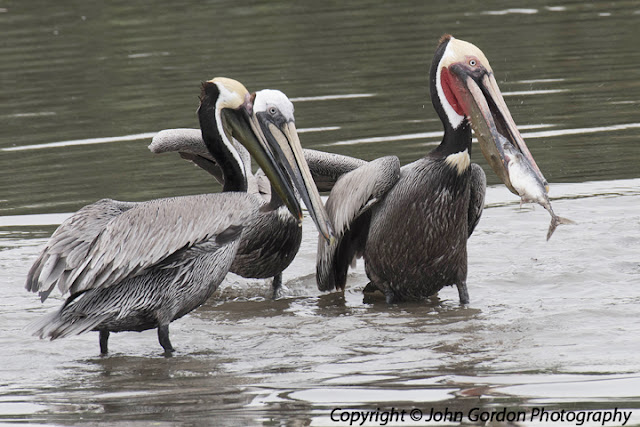 It's a wonder that La Penita's electrical poles are still standing. The culprit is the endemic golden-cheeked woodpecker.

If there was just one bird I was hoping find and photograph on this trip it would have been a painted bunting. I had photographed one earlier in the week but from quite a distance. If I had choose only one picture to bring back home, this would be it.


Thanks for your patience if you got this far in the blog. A very dodgy internet connection makes blogging a challenge and  somewhat time consuming. However if you hang in there I have some terrific birding experience to share with you all'

Chula Vista is comprised of tropical decidious forest, wetlands and savanna, a few seasonal ponds, some older growth trees and a number of freshwater creeks. The remaining land is cultivated with corn and pineapple plantations. Coconut and palm trees and thick secondary growth offer food and shelter for birds like the cuckoo squirrel, citreoline trogon, rose-throated becard and ivory-billed woodpecker.

Chula Vista was my first walk into the Mexican countryside. Most of my birding has so far has been on beaches, around tourist resorts and in and around small villages and towns. The amount of bird life there was simply stunning so a walk in the country side was going to be an exiting experience with an opportunity to encounter some new species. At our first designated stop we had a dozen species. I won't soon forget my first vermillion flycatcher. It was hawking insects, just far enough away to thwart my efforts of a decent photo. Thankfully I was to get more chances later on.
Moving on we flushed a number of Wilson's snipe. In the trees Sinaloa wrens, Nashville and orange-crowned warblers picked off insects and in one tree an Eastern meadowlark, normally seen in open fields watched our movements.


In the brush along the dirt road flocks of blue-black grassquit, ruddy-ground doves were busily making the best of the early morning dew.

We walked along the side of one field which this time last year was several feet deep in water. It has been a very dry winter in Mexico, good for tourists but not so good for farmers.

Despite that, the small body of water that remained did offer up a number of greater yellowlegs, least, stilt and spotted sandpipers. Several hundred black-bellied whistling ducks preened while around them fifty of so long-billed dowitchers slept with one eye open, prepared to take off if a predator appeared unexpectantly. It's strange seeing blue-winged teal, cattle egrets, roseate spoonbills and American wigeon co-existing. A white-faced ibis came in to join the other birds at the very same time a peregrine falcon passed over the pond. 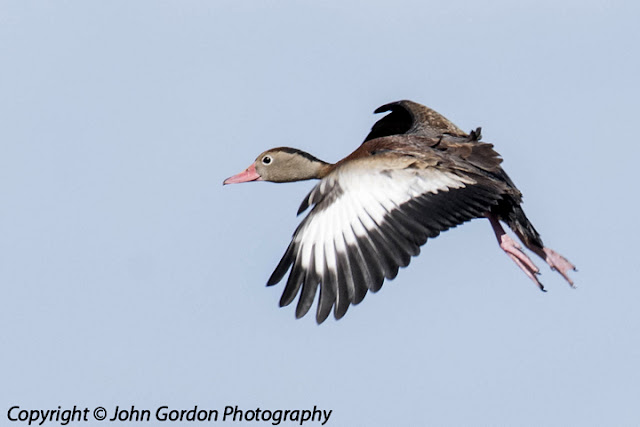 Leaving the pond behind we ventured back into farmland where a Harris's hawks landed in a large tree surveying the fields for prey. I was lucky enough to capture this one in flight (see below) albeit against the sun.

One family of birds I hadn't seen in Mexico were falcons. Just as we were heading toward the end of our walk Ed spotted a laughing falcon perched high up on a tree. At first it was obscured, then suddenly it took off in our direction. I came close enough for me to get a few flight shots.
A little later we came across another and this time I was a little better situated to get the short below.
All the images are taken with a Nikon D500 and Nikon 200mm-500mm handheld.

As our walk came to a close we spotted a number of new species for the day including American kestrel, zone-tailed hawk, northern jacana, limpkin and least grebe.


Finally but not least I finally tracked down a vermillion flycatcher. They never stay still and always manage to fence hop out of reach. This one I found while my fellow birders had gone ahead.
Our day was complete.
Thanks to Ed, Kevin, Myrna and the birds.
Chula Vista List 1
http://ebird.org/ebird/view/checklist/S33709067

One morning while birding I met a couple of hikers. We got talking about birds, I asked if they knew anyone local who might be able to provide some local birding tips. We exchanged e-mails and I thought nothing of it. Next morning I received a text from Quadra Island BC birder Ed Jordan. Ed spends his winters here. He knows his way around the area and has a very good knowledge of local birds. I think he said he has five hundred Mexicans species on his list. One morning we took a walk around his patch, the village of Los Ayala. We walked along the beach, through the sleepy village and skirted around some nearby farmland. The buntings were particularly skittish and I had to crop and enlarge them considerably but I am happy enough with results to publish them here.


One thing that has become apparent on my birding adventures is that the pure joy of observing birds, sharing those experiences with others like Ed provides just as much enjoyment as the bird photography itself. Freed from the constraints of having to "nail" the shot I am just as happy to get some decent ID shots for my slideshows.

As a photographer I have been wondering around about what will happen with all the thousands of files that I will or am amassing. Sometimes I think to myself , how many short-eared owl shots or vermillion flycatchers do I really need! I must be that collecting, listing obsession I touched on in an earlier blog.


Ed was particularly happy that I managed to see my first Mot Mot. Found in Mexico and Guatemala it prefers scrub and dry woodlands.
For a complete list of birds check the link below:

Arroyo Guinea, to use the ebird designation is a small, somewhat neglected creek that divides the communities of Rincon de Guyabitos and La Penita. Human encroachment and the growth of tourism has not been kind to the area. Crocodiles still inhabit the shallow waters and the bird life is still present, although probably not in historical numbers. That said, it is still holds some surprises as I was to find out.

On first looks the black-necked stilts, the snowy egrets, neotropic cormorants, white ibis and three types egrets were the main finds. For those who know the area I birded from the pedestrian swing-bridge down to where the water meets the ocean.

On closer inspection and with a little patience the bobbing movements of a spotted sandpiper could be made out.


The green kingfisher is half the size of the belted kingfisher

Reminds me of when I was in Point Pelee and I saw a black and a yellow billed cuckoo on the same day and within minutes of each other. That was a good day too.

Just when I was thinking I was having fun I ran into New Westminster birder Monica Nugent who when birding the previous day had found a varied bunting along the riverbank. There was just a small window of opportunity, early in the morning before the beach became too busy to view the bird. We met the next morning and soon after I was able to get a photo and another lifer.


The estuary is also home to black and turkey vultures, more willet than you can count, Caspian, elegant and royal terns, various gull species, whimbrel and  brown pelican who scrounge fish off the fishermen. A few greater yellowlegs can also be found hunkered down with whimbrel and the occasional long-billed curlew.


The heron population includes the great-blue, tri-coloured, little blue and black-crowned night heron.  All can be seen from the swing bridge.
A number of white ibis seem to be able to eke out an existence despite there dubious water quality. The infrastructure of La Penita especially hasn't been able to keep up with the burgeoning growth both from industry and tourism. Much will have to be done to as both Rincon de Guyabitos and especially La Penita continue to grow.
Further down downstream where the creek meets the beach the water is shallow wading birds find plenty of pools where fish get caught on the ebbing tide.

Where the creek runs into the ocean large numbers of seabirds are present, the most common being the magnificent frigate bird and brown pelicans. A hat is advisable as a hundred or more hover over the beach at any one time searching of scraps left by fisherman and beach vendors.

Tomorrow will be another day surprises I expect as I have no plans except to wander around in the morning and see what pops out of a bush or flies overhead.


It's never too late to start birding"
John Gordon
Langley/Cloverdale
BC Canada
Posted by John Gordon at 06:28 No comments: