A large flock of Snow Geese have spent the winter on Abbotsford's Sumas Prairie. A rare occurrence local birders tell me. The winter rye planted by farmers and other left over crops are a good food source for swans, geese and ducks. There are also plenty of fallow fields for the birds to turn over, if the pickings are that good why haven't the Geese been regular visitors in the past? A mystery indeed, if they return next year there may be factors at work that are not yet fully understood. Normally Snow Geese spend their winters in the Skagit Valley and places further south to California. Lesser but increasing numbers winter on the coast around Boundary Bay.

*Since I published this blog 30 minutes ago it has been brought to my attention by someone who knows more about the subject that there have been a few Snow Geese on the prairie since around 2000 but not in the large numbers seen this year. I stand corrected. 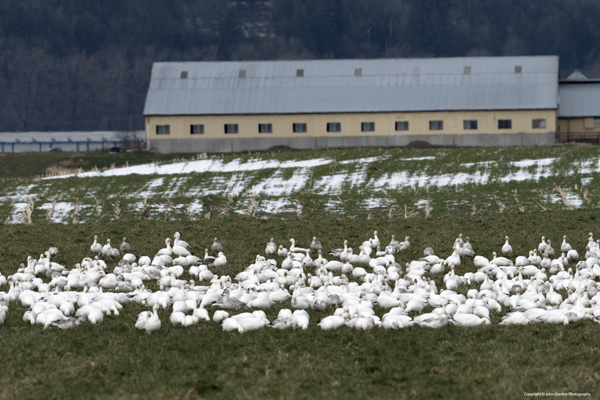 On Tuesday I came across a large flock of perhaps 800-1000 birds. At first they were out of reach for photographs so I just stayed in my car and used my bins to see if there was anything interesting in the flock. The first series of images all turned out as if they had been shot through a mirage. Later I read that it was due due to the heat emanating from the car itself, something I didn't realize until I began editing. Fortunately pictures taken twenty minutes later were sharper as the car had had time to cool down.
Eventually as the flock munched their way toward me (a car is the perfect blind) the flock suddenly lifted off the ground and came even closer, close enough to take a few pictures. Had I got out of the car I'm sure I would have flushed the whole flock.
They were now close enough to study and soon two darker birds stood out, One very dark overall and one an intermediate morph. What a treat to see those birds, it made my day.
"Blue Goose" 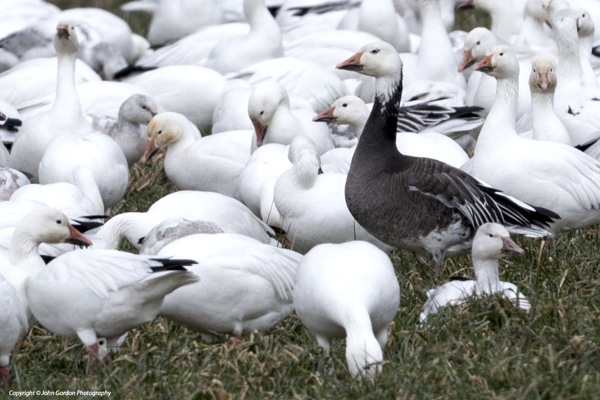 It's hard to believe that a century ago only three thousand Snow Geese were left in North American. They almost followed the Passenger Pigeon on the path to extinction. Like the Trumpeter Swan Snow Geese have made a remarkable comeback. The Passenger Pigeon weren't so fortunate. see the link for the whole sordid story.

More on the Passenger Pigeon
These days, so great are Snow Goose numbers that their breeding grounds in the arctic have become threatened, not only from climate change but from the birds themselves. At least they are tolerated on Sumas Prairie, unlike parts of the US and Canada where hunting up to forty-thousand birds a year is permitted. Meanwhile, enjoy the spectacle, soon they embark on their migratory journey up north.

Where to bird in 2021? Just one of the many question I posed myself as I polished off the last of the turkey, mince pies and Christmas pudding. I suppose freezing ones bits off during the Christmas bird count a few days later was a kind of penance for eating the gravy bird.
After birding the Metro Vancouver region for 364 days in 2020 I decided to try something a little different for 2021. After much deliberation I hatched a cunning plan to bird the Fraser Valley region. I am fortunate to live on or quite close to the border of two ebird regions. For those not familiar with ebird, the app splits regions, provinces, countries and world into portions and birds recorded in each region are assigned to an online database for all to use. The app makes it easier to find good birding spots or at least get a start.
See
More on ebird
The Fraser Valley region for the purposes of ebird includes Abbotsford, Chilliwack, Hope and into the Coast Mountains. There's the Skagit Valley, Sunshine Valley, Manning Park and many areas to be explored. As travel is restricted this will act as a perfect substitute. Distances are the only downside and some heed will have to be taken so as not to pile on too many kilometres. Even so, Aldergrove Regional Park and Glen Valley are just fifteen minutes away. I've already seen some good birds there..

All that said I still plan to bird the Metro Vancouver area as I can do so from my kitchen window and I'm only minutes from Brydon Lagoon and a number of close-by locations. Even Boundary Bay, White Rock and the farmlands around Delta are within easy reach. Although I won't bump into my birding friends as much I won't miss the traffic and crowds. Birding in the Fraser Valley however offers certain challenges. There are not as many birders to pass on tips, the region is larger and of course it takes time to learn about those special spots where one might find a particular target species. That's where ebird comes in handy up but only to a certain point. Local knowledge is paramount. Yesterday for example I met up with two well seasoned Fraser Valley birders John Vooys and Ed Klassen who kindly offered to show me around the Columbia Valley, a rural area south of Cultus Lake. A small valley that looks like a a great migrant trap come the springtime. It was bitter cold minus 4 and a wind chill made it feel even colder. The two showed me around some of their favourite spots including two feeders. I think we ended up with 17 or 18 species which was very good considering the dipping temperatures brought on by a rare arctic front. I didn't take any pictures as there weren't really any opportunities and besides it was too bloody cold.

Not to be outdone I stopped off at Sardis Park on the way home to search for and hopefully photograph the well documented resident leucistic Northwestern Crow. The bird which is a bit of a local celebrity lacks the pigment to give it the black colour normally associated with crows. According to a local resident I spoke with the bird has been resident at the park for at least five years. Luckily, it was the first bird I saw as I entered the park.
Unlike the burgeoning Metro Vancouver birding community  I spent January birding in the valley and  met just one birder and one photographer. I did however meet up with an old acquaintance and excellent birder Gord Gadsden who passed on some great tips. Eventually he re-located a super nice Glaucous Gull that I had found a few days earlier but couldn't get a photograph of. I had run my camera battery down and slipped in the replacement only to find that was dead too. I had forgotten to charge it.

Another tip resulted in an American Pipit and a Lapland Longspur. I was lucky, on my first attempt. I have returned three times to the same location looking for Horned Larks but have never seen the flock again.

One thing the valley does have are large tracts of agricultural land that once supported the mighty Sumas Lake. Each time I bird Sumas Prairie I imagine the old lake bed I'm driving on and a great expanse of water stretching for the US border to Sumas Mountain and up toward Chilliwack. It must have been a stunning sight, that is apart from the legendary swarms of vicious mosquitos. A hundred year ago plans to drain the lake began. It took millions of dollars and years of political machinations to make it a reality. Indigenous peoples had lived there for millennia. They were eventually shafted by white settlers, greedy businessmen, federal, provincial and municipal governments. One of the most prolific lakes in the region was completely gone. Lost were the sturgeon, millions of migrating waterfowl, salmon rearing beds and the livelihood of the Semath, Nooksack and Sto:lo people. A compelling account of how the lake was lost can be found in Chad Reimer's book, Before we Lost the Lake

see link
Before-we-lost-the-lake
(Below) some of the undulating farmland and former lake bed is low enough to trap water during the winter. Originally the spring freshet would inundate the lake raising levels which reduced flooding downstream. Today dykes divert local rivers and streams into the Fraser River while  keeping freshet water at bay. Pumps move any water around. There still remains a few thousand ducks, some wintering raptors but nothing to compare with what was lost.

My first visit to Brown Creek Wetlands was quite eventful. The wetlands are just past Yarrow and before the turn-off to Cultus Lake.
From the parking lot to the river is only a few hundred metres. Half-way along the trail I stumbled upon mixed flock of Black-capped Chickadees, Ruby and Golden-crowned Kinglets, Brown Creepers and a Hairy Woodpecker. Soon a flock of junco's joined in and they brought along an Anna's Hummingbird. Needless to say I never made it to the river to look for a dipper. As I was leaving a Belted Kingfisher plunged into the creek and came up with a nice juicy salmonoid, a testament to how important the wetlands are as a nursery for fish and other creatures. Across the river is the Rotary Trail that I am told has excellent year round birding, somewhere I'll be exploring during migration time. At a recent Christmas bird count the trail turned up an American Dipper and a Glaucous Gull.

At Harrison I was able to photograph a couple of male Redheads that had spent the winter in the lagoon. Out on Harrison Lake whitecaps rules the waves, several Horned Grebes and flock of Common Mergansers were  busy feeding. At the mouth of the oddly named Miami River was a single American Dipper doing what dippers do. Three year birds just like that. I had a pleasant lunch and birded my way home. Later in the year i'll be going back and maybe camp up at Sasquatch Provincial Park, a good spot for forest and marsh birds.
So the first thirty or so days in the Fraser Valley have been a refreshing change, almost like a holiday and as the migration begins and spring slowly takes hold i'll be eager to see what shows up. Meanwhile I'm hunkered down, reading books and waiting out the cold snap. Apparently for only the third time in a hundred years every province in Canada is below freezing at the same time.
vancouver/canada-freezing-cold