After a two year hiatus, Gareth’s Pugh's annual birding trip was on again …. and I was invited to join. Most participants are avid birders. I am a nature lover and enjoy a bird or two.

The Big Bar Ranch is in the Cariboo between Clinton and the Fraser River; ranches, grasslands, lakes, and last but not least the dramatic Fraser Canyon. There was spectacular scenery all around.

Arriving at our cabin, we were welcomed by the Mountain Bluebirds and Cliff Swallows that were nesting right there. Amazing to see them so close-up sitting at our porch, a true birder’s cabin.

After our first homemade dinner of chilli, the evening program was birding. All 9 of us jumped on board with our binoculars and went to a pond we had seen on the way up. As soon as we left our vehicle the mosquitos attacked us, and we were not prepared for them at all.

Within 5 minutes we were all in the car again, and from then on, we made sure that we "Deet-ed" ourselves thoroughly. It was a M&M Memorable Mosquito trip, coming home I had more dead mosquito bodies on the inside of my windshield than on the outside.

This has been one of the very few trips I was not the first one up in the morning. Birders rise early, and birding happens from the early morning into the late evening (nightjar survey). After the first day of stop and go with our cars on a route of Gareth’s choosing, I was exhausted.

A lot of bird species were recorded, and I enjoyed a “lifer” *of my own; the Few-flowered shootingstar. Big pockets of them. It has also been cooler and wetter than usual in this area, and we hit it right with the wildflowers. Together we tallied over a one hundred (plant) species, and in very large numbers.

*Lifer as in a new plant.

Birders use a lot of gadgets, obviously binoculars, scopes, and cameras. But also, their phones to either let it record and tell you which birds it hears, or to play a bird call. In the evening, the many birding books were put to good use when the discussions got heated over the true identity of some birds. Consensus was always reached in the end.

I appreciate how they love to share their knowledge and enthusiasm and are only mildly disappointed when you don’t share the same excitement over a certain species….

Our day-trip to Churn Creek on the west side of the Fraser River was memorable. A very warm day in and around the Fraser Canyon which is out of this world beautiful and to my surprise so little known.

With a few stops on the way to bird, to admire “wild” horses, to take in the breathtaking landscape and to celebrate the first flowering Brittle Prickly Pear Cactus, of which we later did see patches and patches, we arrived at the bridge to cross the Fraser River to Churn Creek.

It was an extremely hot lunch break in between the fields of flowering cactus. After, we descended to the river and found a few new bird species. I loved the vibrant yellow of a pair of Bullock’s Orioles higher up on the hill.

That evening we enjoyed 1 of our 4 variations of chicken-with-rice dinners we had that week.

Just after leaving the ranch the next day, we did spot a Sandhill Crane family with 2 colts. So gracious.

Big Bar Lake was our destination. Another gorgeous day in a beautiful place. But before we got to see the lake, we spent 30 minutes in the parking lot… birding…. but so worth it as a Northern Waterthrush was heard and then seen. We hiked part of the Otter Marsh Loop: sun, birds, and flowers. It does not get any better.

Indeed, it got worse the day after with soggy rain. But I learned that you can also go birding in the rain, and that is what we did. We boarded our dusty cars and came back with muddy cars instead. We found the reward for our perseverance though: American Avocets with chicks that were not recorded before in this area. I now know what a Scottish lunch is; eating your lunch in the car on the side of the road while it is pouring rain outside.

Our last day was another trip into the Fraser Canyon, the road to the decommissioned Big Bar Ferry. We found out that we were traveling mainly on OK Ranch land when talking to the owners. They did not mind us as long that all we did was birding. Here I did see my first Lazuli Bunting, what a colourful bird!

After yesterday’s rain, the sandy roads were so slick which made us decide to turn our cars around and enjoy lunch in the sunshine looking at the landscape and the raging muddy waters of the Fraser River.

Undeniably, birding is rubbing off on me. On the way home I spotted an owl sitting on a post along the highway. After a U-turn it appeared to be a Stoic Owl 😊

We recorded the following number of species:

"It's never too late to give up the writing duties"

Extreme heat a strain for birds already burdened by habitat loss
Habitat conservation and action on climate change are needed to lessen threat to at-risks species.
See story in the The Narwal which used my Red-breasted Sapsucker and Merlin images.
Click on the link below
Birds and Heatwaves
The image below was not used as the Narwal magazine format is for landscape rather than vertical. The vertical shot below would make a perfect cover shot. Don't forget to leave room the magazine's name and inside contents. 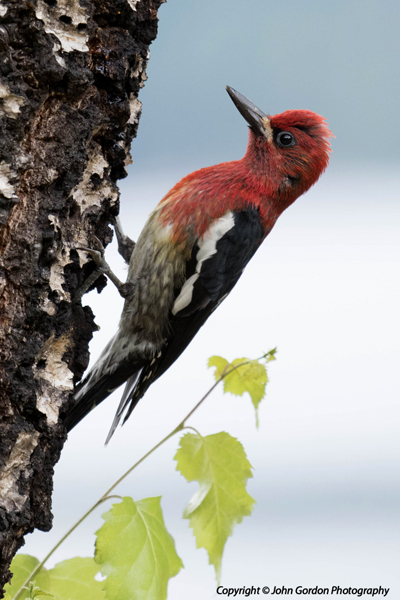 "It's never too late for deadlines"
John Gordon Photography
Langley/Cloverdale
BC. Canada