Large tracts of farmland in southern Saskatchewan were still underwater after a very wet winter. The wood ticks were everywhere, especially during the moist and humid weather typical of mid to late May.
I had heard that an owl had been seen sitting on a fence post at a nearby farm. What type of owl no one knew but it had been seen earlier in the day.
After walking the field and stumbling on what appeared to be a badgers den, a sudden flash off wings announced the presence of a Burrowing owl. I backed off and sat quietly about a 150 feet away from the burrow. Thirty mosquito bites later the bird returned. It sat on a post glaring at me before flying back to the vicinity of the burrow where I managed 4 flight shots, three of which were slightly out of focus and this one "keeper"
Although protected here in Canada the birds are subjected to numerous hazards during migration and on its wintering grounds where DDT spraying is commonplace.
.

I had gone to the Elkhorn area of Cypress Hills, Alberta to photograph warblers but after arriving and the light failing very quickly I decided to have a cuppa of tea and settle in for the night. At around 4.45 a.m next morning an almighty series of calls woke me from my sleep.
Peering out the window of my van there was a Wild Turkey with two females. As a newcomer to birding I always thought the Wild turkey was something from the Mid-West USA. The light was so low that photography was almost impossible. After tens minutes or so the birds wandered off into the bush. A few hours later and ready to continue my journey I was just about to leave the campground and there were the same trio but this time with a little better light, after a few quick shots they too disappeared into the forest.
I wasn't finished with the wild Turkeys yet. During my visit to Vernon I saw another Wild Turkey in the demonstration forest on Benchrow Rd, although I don't have photographs another birder had some good record shots. 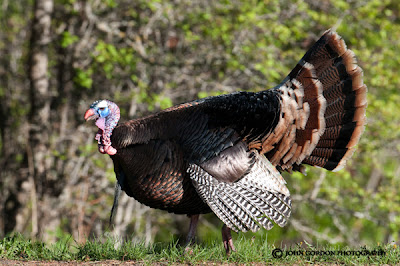 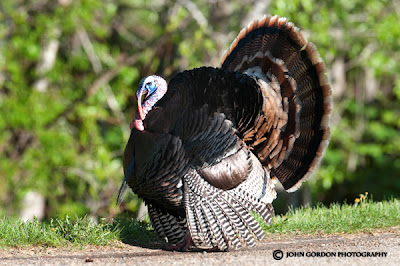 One thing about birding is to be prepared for the unexpected, perhaps that is why it is such a popular pastime with people from every walk of life.
I spoke to a game warden and he explained that the Turkeys had made a nuisance of themselves and some had to been relocated. I suppose that happens when you build cabins, a gas station and other infrastructure on their territory. The only predator they have is the cougar which have been turning up at Elkhorn to have their young and snack on turkey meat. I suppose its like a wildlife supermarket. Trouble is cougars and turkeys seem to get in the way of us "humans"
Nothing new there!
Posted by John Gordon at 09:53 No comments: 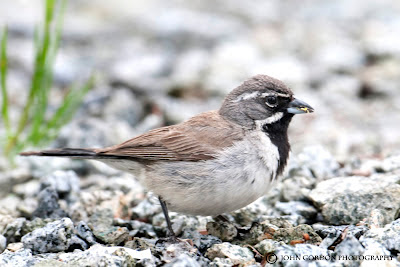 It wasn't too hard to find this rare visitor to B.C. as it was quite happy to feed right next the canoe rental office. The sparrow spent most of the time feeding on grass seeds.
A few feet away an American redstart flitted from branch to branch, perhaps in search of a mate. 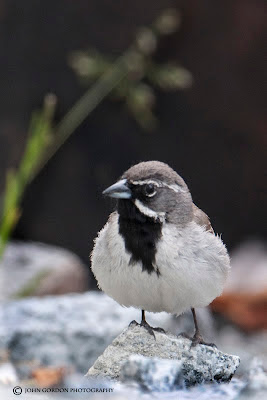 It was hard to tell the difference between the two different terns until I photographed the birds at different locations.
The first are the Forester's tern with an orange black tipped beak and longer tail projection that can be seen in the second series of photos. Please let me know if you have different opinion as I am just a beginner birder.
The first were photographed at Val Marie near Regina. The second series are from Chaplin IBA Saskatchewan. 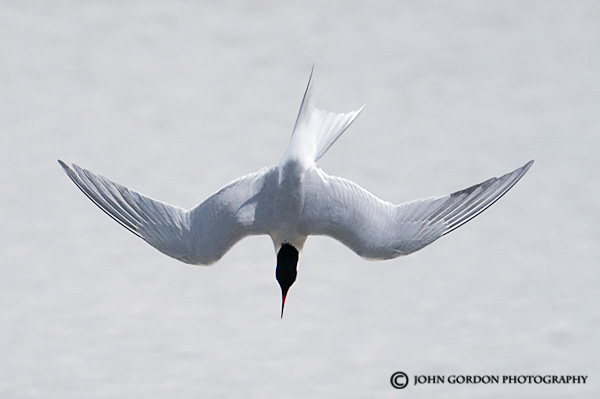 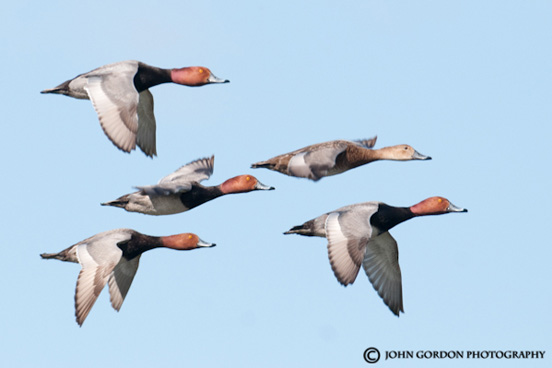 My very first and only ever sighting of a Redhead duck was this small flock flying near Val Marie (IBA) Craven, Saskatchewan. Slightly fortuitous as I was photographing Forster's terns diving for fish and happened to look up and there they were just in range for a half decent shot. I think this may make a nice print, we'll see. The area is usually spayed for mosquitos so the bird life has dropped off in the past few years. This year there was no spraying and the warblers, flycatchers and others insect feeding birds are back in force.

Earlier in the day in a waterlogged ditch I came across a Wilson's snipe as well a pair of Wilson's phalarope. Although close to an IBA they choose to forage in puddles and ditches. 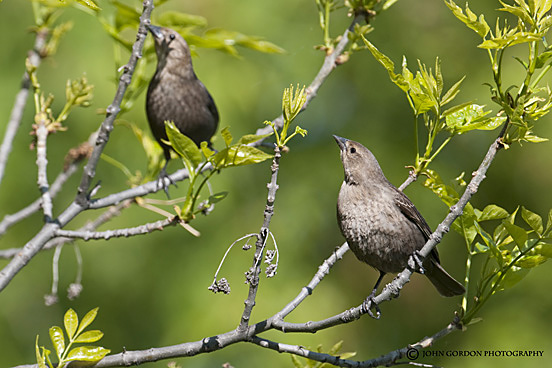 Two female brown-headed cowbirds watch the path of a yellow warbler (below) In this particular area of Last Mountain Lake, Saskatchewan there were perhaps hundreds of warbler nests as well Red-eyed vireo, black-capped chickadee and smaller flycatchers that cowbirds could lay their eggs. This parasitic behaviour is a throw back to when the cowbirds followed the great buffalo herds across the American Mid-West.

I read somewhere to get better at bird photography practice with the more common birds like sparrows, robins and ducks.
I did a little research and spent some time tracking down some of the sparrows that frequent the Okanagan and the hedgerows of Alberta and Saskatchewan.


Although the Yellow-breasted chat has a raucous call, the bird itself is very secretive and to see one actually perch for a photograph can take a considerable amount of searching and patience. I always tell people bird photography is very similar to angling, hours can be spent just waiting for the right moment. I really think that birdwatching/photography leaves less of a "human footprint" than angling and that is why I no longer fish and have that fishy smell about me, at least I don't think I do! 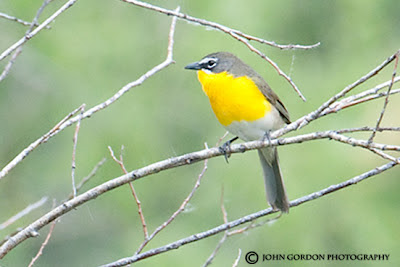 A big thanks to Russell Cannings for letting me know of a reliable spot in the Okanagan Valley where this beautiful bird could be observed.
Posted by John Gordon at 12:38 No comments:

One of the "target" birds for the trip was the Bobolink. At the turn of the century millions of Bobolink would spread northward from the Southern United States and Mexico making their way to Canada to breed. They were caught in nets as a food industry until their numbers declined making the whole enterprise unprofitable. We just don't see them in Vancouver so finding this one in Saskatchewan near Rowan's Ravine, Saskatchewan was a bonus. I also saw one at a distance on Road 22 in the Okanagan, albeit too far way to photograph.
The yellow-headed blackbird below was a bonus shot on a travel day as I stopped in Castlegar for a a cup of tea.  I also heard and then saw a Sora which played hide and seek with me, alas no photographs to show for the effort
Eventually i'll post more shots here as well as on my website.

May 7th 2012.
I had no idea what to expect when I left Langley on a twenty-one day birding trip on May7, 2012. First stop was Manning Park where the only birds were a few robins, a black-capped chickadee and a yellow-rumped warbler.
Snow was still clinging to the shaded areas of the campsite and the Similkameen River had risen a foot overnight.  Soon after leaving the campsite I came across a Black bear eating grass at a roadside salt lick. Soon a number of others stopped and asked me to take pictures with their cel phones. Eventually, fed up with all the attention the bear growled and we all ran for our vehicles. As I approached Princeton a herd of ten or more Mule deer took little notice of me or the passing cars.
A Coyote posed for picture after picture at Christmas Pass.
My three week sojourn would eventually see me spend 10 days in the Okanagan, two days in Creston, five days in Saskatchewan which included a wicked snowstorm. On the way back, a night in the Elk Horn area of Cypress Hills, Alberta, a damp night in the Rockies at Lake Louise where a Raven stole my bread. The trip finished in Vernon and then back home.


There were special moments everyday. The highlights were the new sighting like the Yellow-breasted chat (a special thanks to Russell Cannings for all his advice on location)
At Cypress Hills I was in search of songbirds but only found three Wild turkeys that woke me up at 4.45a.m. Some birder I am, I didn't even know there were Wild turkeys in Canada! It is said the Turkey call can be heard a mile away, these birds were just feet away so needless to say I didn't need my alarm clock!
Other highlights were a Burrowing owl that I happened to flush while walking through a farmers field. It settled on a fence post, posing briefly with an angry glare.
Finally, if that wasn't enough, I tracked down a Piping plover at Chaplin IBA Saskatchewan.

See more about the Piping plover at
http://en.wikipedia.org/wiki/Piping_Plover
An endangered species with an estimated population of 5700 in North America. There are 50-200 at Chaplin which is on the Trans Canada just west of Moose Jaw, Sask. After much scanning the lake I managed to shoot this grainy record shot from the road (below) I now know where my next trip will based.

On the last day I photographed a Clay-colored sparrow (see separate post) near Vernon bringing the total of "lifers" for the trip to 35 with a further 70 species photographed. One bird I didn't manage to photograph was the Brown thrasher at Writing on Stone Provincial Park in Alberta. I did however join a very hospitable group of Alberta birders who were taking part in a May long weekend bird count. Being a typical Vancouverite I high-tailed out just before the snow was expected to fall only to spend the next six hours battling snow from Medicine Hat to Regina.