A few months ago, fellow birder Colin Classen and I were chatting about finding rarities, the ones that turn up once or twice a year or in extreme cases once in a decade. As it turned out a few weeks later, Colin found and photographed an Ash-throated Flycatcher (ATFL) while on one of his regular walks at Colony Farm. He couldn't have been happier to share his find with others in the birding community. I and others tried for Colin's bird but we all dipped. I wouldn't be the first bird I would miss but that's just one of the many aspects that makes birding so fascinating.

In birding parlance the ATFL was a "really, really good bird" occurring in the Lower Mainland perhaps once or twice every couple of years. Over the last ten years I have only seen two myself including one a few nights ago at Brunswick Point. That bird was found by Grant Edwards who shared his find via the BC Rare Bird Alert allowing numerous other birders to get on the bird. For many, the Brunswick Point ATFL was a lifer. It's still there as I write a week later.

Most often when a rare species is found word spreads quickly. That's what happened to me a few weeks ago during a visit to Reifel Migratory Bird Sanctuary in Delta. Due to Covid19 I and others had to book  visits beforehand. Prior to mid-March one could just turn up at the sanctuary and bird away. Fortunately  I just happened to be booked in Tuesday September 8. I chose that date as the migration of shorebirds would be in full swing and the tides high enough to force the flocks off the foreshore into Reifel's ponds. That's the theory anyway.

I found myself at the West Field where many of the smaller sandpipers find suitable habitat in the shallows. Other sandpipers present included Long-billed Dowitchers, Lesser and Greater Yellowlegs, a few Pectoral and the flock of Western Sandpipers. The longer-legged birds can feed in deeper water. The diminutive westerns however prefers the shallows where they are continuously on the move, probing for food, re-fuelling for the next leg of an epic southern migration.

It was time to scan the flock again. Flushed earlier by a Merlin the small flock of westerns were agitated and rarely stayed in one spot. Eventually they settled down to feed. Birders are always hoping for something different, scanning the flock over and over in the hope of finding the proverbial diamond in the rough. Perhaps there would be an early Sharp-tailed or even a Stilt Sandpiper. The westerns were on the move again, now barely visible even with a scope. Once again they flew closer which gave excellent views. Scanning through the flock of 30 or so was one bird which looked quite different in size, somewhat larger and with a long decurved bill. What I needed was a picture to help identify the bird. If it flew off what proof would there be, believe me I been stung before with an odd looking hummingbird a few years back, no picture, no proof, no kudos. This time I shot off a few frames with my Nikon P1000 but the distance and reeds blocking the view made it difficult to get a clear image. Finally I managed  three frames but being nervous and shot at 3000mm handheld, the results were far from perfect, in fact they were terrible, but proof nevertheless. Looking at the images I came to the conclusion that it was a Curlew Sandpiper, a bird I had photographed in the UK but never in Canada. I needed back-up confirmation but no-one close-by could help. I sent a picture via text to Mel who does an invaluable job running the BC Rare Bird Alert, the fuzzy picture impressed her enough have her immediately make her way to Reifel to confirm the sighting. Once she had put the word out other birders began to converge on Reifel.

The buzz of finding a rare bird is something only a birder can fully appreciate. It's not that a common experience but when it happens it's gratifying. Being Johnny on the spot means waiting for others to arrive to get them on the bird but better still there is no need to battle traffic, drive like a bat out of hell or slip away from work for a fictitious doctor's appointment.

Thirty minutes later an out of breath Mel arrived but the curlew had taken off. Every birder knows that sinking feeling, it's not nice. Mel decided to stay put in case the birds flew back and l went to scout the other end of the pond. Five minutes later I was on the bird again by which time other twitchers were arriving. I texted Mel who joined us, there were smiles all around. For many the bird was lifer. 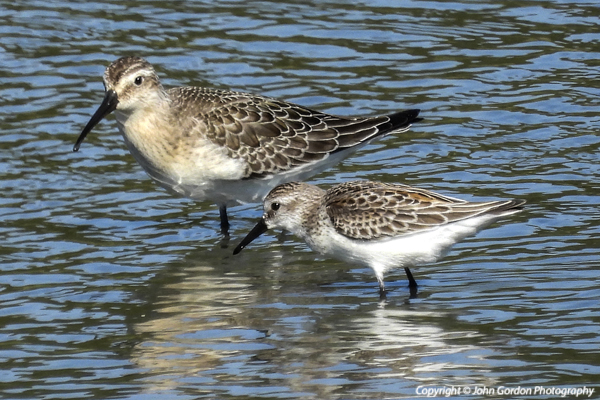 More birders arrived and there was much back slapping and high fives which reminded me of my conversation with Colin a few weeks earlier.

"It's never too late to find a