Skagit Valley Provincial Park is just one hundred and fifty kilometres from Vancouver. The park entrance is thirty-five kilometres east of Hope. The location for the ninth annual Skagit Valley Bird Blitz (SVBB) organized by the Hope Mountain Centre.
I had been invited to open the event with a Friday night presentation so when I arrived Friday afternoon I immediately went out for a short walk to check for birds. I am familiar with the area as I have made numerous visits with the Langley Field Naturalists where the focus is more than just birds.
I decided to take my P1000 bridge camera for a quick walk around the picnic area just in case I saw anything worth photographing. I left my D500 and 200mm-500mm at the campsite.

Outside the group campground a large open grassy area with picnic benches offered spectacular vistas out toward the North Cascades Park in the USA, Ross Lake National Park and the Pasayten Wilderness. Ross Lake is dry at this time of year but  will eventually fill with snow melt. The dammed and logged valley provides Seattle with twenty percent of its electrical needs. On the Canadian side is almost twenty-thousand hectares of wilderness offering great opportunities to hike and bird.
The park is however under threat from logging and greedy mining barons.

BC Nature wrote:
Many of you are aware that logging occurred last year in what is known as the Manning-Skagit ‘Donut Hole’. The Donut Hole refers to the area not yet included within the parks but surrounded by Manning and Skagit Provincial Parks. This area has not yet received park designation due to an old mining claim, but the Skagit Environmental Endowment Commission is negotiating to buy out this claim. Government allowed logging to occur last year, but after public expressed grave concerns the logging has been put on hold. BC Nature sent a letter about the logging on July 20, 2018.

Now the holder of the mining claim, Giant Copper/Imperial Metals Inc, has applied for a multi-year permit for mineral exploration.

To add insult to injury a 2018 forest fire burnt thousands of hectares of forested mountainside causing considerable damage to creeks and roads. The logging road to the bird blitz opened on Thursday the day before so a huge thanks goes out to parks staff who made it possible for the event to even take place. The road, normally full of ruts and potholes has never been smoother. There were plenty of vacant campsites so treat yourself and get in a visit before the mosquitos hatch. 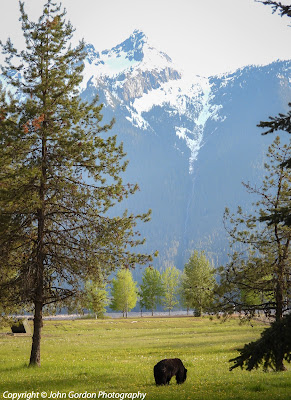 I hadn't really started exploring when I spotted a Black Bear. He looked like a third or fourth year now on its own after spending the first two years with its mother. Although he looked calm and occupied I kept a healthy distance, I was happy I had my 24mm-3000mm P1000 zoom.
When the bear made eye contact I decided to move slowing away.

Closeby three Chipping Sparrows alighted on the gravel path to feed on small black and yellow beetles emerging from the Black Cottonwoods.
After my surprise meeting with the bear I spotted some other birders and I tagged along with them, safety in numbers. Around the forested areas Barn and Violet-green Swallows were hawking insects, American Robins were having a field day with an abundant supply of earthworms.
A Common Raven landed in a nearby tree. Dark against the leaves I moved a few inches to place it against the bright bark which showed off the outline of the bird nicely.  Compositional elements like this come from years of shooting Kodachrome 64 that were 75 cents per shot. In those days we took a  little more time before pressing the shutter, besides who wants to sort through hundreds or thousands of digital files when time could be better spent in the field.

(Below) One of five frames of a Pine Siskin, each with a slightly different pose. I liked this one the best. Black Cottonwoods bark develops deep furrows which in turn attract insectivorous birds.


Soon it was time to head back to camp to prepare for the Friday night slide presentation and supper. Just as we decided to make our way back a pair of Turkey Vultures landed in some distant trees. The P1000 zoom handheld at 3000 mm worked well enough to capture this decent ID shot.

Apart from having a lot of fun, the purpose of the (SVBB) is to build a data base of birds found in the Skagit Valley. A dozen locations are chosen and each day birders break up into small groups to make a tally. I like to bird Chittendon and Whitworth Meadows for the variety of species and stunning scenery. Others prefer mountain hikes and others take on forest walks, any location can turn up good birds. Some birders have been attending for the last nine years and their expertise is shared amongst new participants that include birders of every level. Much of the groundwork was laid by renowned naturalist and expert birder Denis Knopp. Last year I tagged along with Denis who taught me how to find Cassin's Vireo. This year I was able to pay it forward to three novice birders.
The counts began Friday afternoon and last until Sunday morning when on our way home participants bird our way out of the park.


Common forest birds included Pacific-slope, Hammond's Flycatcher and Cassin's Vireo. Out on the lake the Barn Swallows, Violet-green Swallows, American Robins and  Purple Finches were present in good numbers. Meadow birds included White-crowned Sparrows, Dark-eyed Junco's, along the riparian zone Wilson's and Yellow-rumped Warblers, Western Tanagers and Brown-headed Cowbirds were present. A rare for the Valley Lark Sparrow was also photographed on two occasions and at different times. One or two birds we'll never know.
On Sunday morning there was a small fall-out of Warbling Vireo's, Western Tanagers, Townsend's Warblers.
Some 'Sweet Light' and a nice catchlight make this my favourite shot of the entire weekend.

Soon it was time to make our way back to civilization and reality but not before finding a really good bird and rarity (according to my eBird submission) for the park. Cassin's Finch are normally found in the Interior but sometimes wander in the coastal regions which the Skagit Valley straddles.
The finches looked a little different from the Purple Finches nearby so I took some insurance shots just to make sure. I'm glad I did. I had a good bird for the trip and the three birders with me all had a lifer, a great way to end the weekend.


All to soon weekend came to a close too quickly but with 75 species ticked (the final eBird count is still to come) the event went off without a hitch. We shared the campground with a small herd of deer, the mosquitos were thankfully non-existent, the weather balmy and of course the  company was as good as ever.
The next Hope Mountain Centre birding event will be the Manning-park-bird-blitzjune-14-16-2019/
I hope to see you there.