One of my most popular blogs is now trending.
I still love this lens and with the D500 I have found the perfect travel combo.

Life works in mysterious ways. Recently birding and bird photography had to take a back seat. Fortunately there's now light on the horizon and I have been able to venture out more and more. I even took a trip up to Rock Creek for a music festival where I managed a couple of hours of birding at the Kettle River Recreation Site. As I only had a very short time I walked around shooting handheld with the Nikon D500 and 200mm-500mm Nikon zoom. 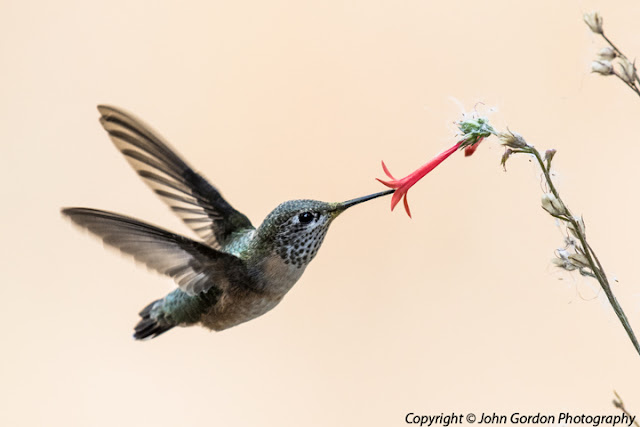 The image of the Three-toed Woodpecker below was taken from a considerable distance, really just a speck at the top of a tree and until I brought it into Lightroom I thought I had a Black-backed which would have been a lifer.


This week I've been down to Boundary Bay in hope of seeing the Bar-tailed and Hudsonian Godwits. I haven't caught up with either yet but I did come across four Semi-Palmated Plovers, nothing too unusual except that one of the birds was very pale.

The first pix is one of the three regular Semi-palmated Plovers, the last a very pale or perhaps leucistic specimen.


More about leucism in birds


A few blogs back I talked about how to go about having one's work published and sure enough a week later I find out one of my images was chosen for the cover of BC Birding.

I sent the editor a few words to explain the who, what, where and why behind the image. Remembering that the editor is compiling a myriad of information from many sources, he's also correcting typos and errors and then finally the magazine has to be laid out. It's a tremendous amount of work and takes skill and perseverance, especially when done on a volunteer basis. I say this because writers and photographers need to make the editors job as easy as possible


The LeConte's Sparrow which appears on the cover was a target bird for many in the group and thanks to our group leaders everyone had great views. LeConte's prefer undisturbed damp fields. On reflection I would have preferred to have photographed the bird from more of a side angle but I didn’t want to risk flushing it before everyone had had a good view. Thanks to Brian Paterson for getting us on the bird. 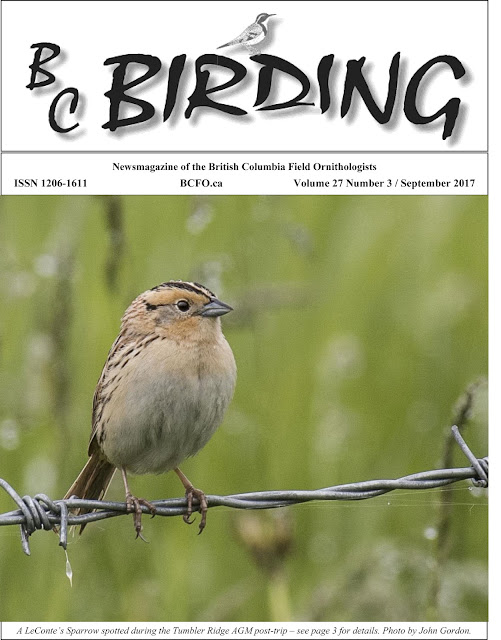 The Peace River region is somewhere I had always wanted to visit. Situated in the northern part of British Columbia, the Peace Region is a three-thousand kilometre round trip journey from Vancouver.
Three days of hard-core birding were slated for June 11–13 following the BCFO convention in Tumbler Ridge.
Twenty birders were split into two groups. Mark Phinney and Brian Paterson were group leaders.
Based in Dawson Creek and led by Brian, our group visited numerous birding hotspots including Swan Lake, Road 201 and McQueen Slough. Day 2 saw us visit Fort St. John where we birded Beaton Park and Boundary Lake, Watson Slough as well as spots in-between. 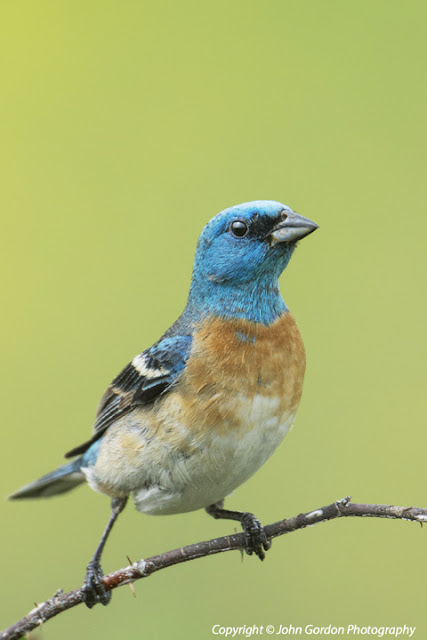 The Lazuli Bunting photo (back cover) was taken on my way home on the West Fraser Road just south of Quesnel. The area has been in the epicentre of the massive BC fires and many of the stunning areas I visited are now charred beyond recognition. The forest will re-generate

and
then more good and surprising news came from Nikon

Congratulations! Your Contest Entry has been selected to become a Gallery Tour
Finalist in the 2017 Nikon NPS Member Exhibition Photo Contest

The image below was taken at the Jantar Mantar Open Air Observatory, Jaipur India. 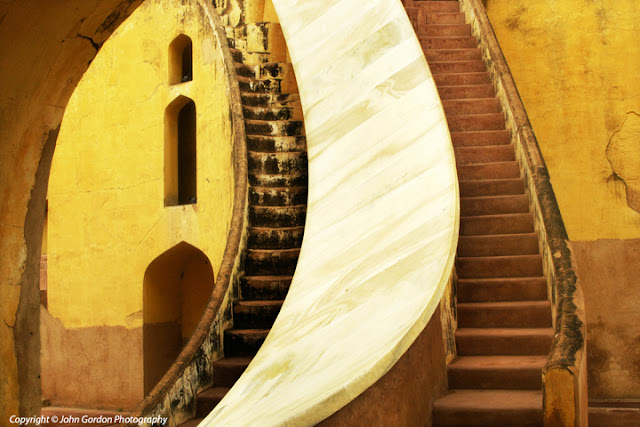 Now all I need is to find some godwits.

Sorting through some of my files last week I came across an old photo page I had published in the Langley Times. It got me thinking about the whole process of getting an image into print. The idea came about when I recently shared a ride with a gifted photographer who for whatever reason couldn't get his work published.
Here are some thoughts that might help you get published. Sometimes but not always the pictures themselves can be quite ordinary, they don't all have to be award winners as long as they tell or contribute to a rounded story that readers can relate to. This photo page below was about Brydon Lagoon in the City of Langley.
The first picture below is straight out of the camera. There's nothing too special about it at all except I have purposely left plenty of space at the top and bottom of the picture to place more photographs, a title and some copy.

As I had other assignments that day I remember having only an hour or so to gather the photos. I had been down to the pond previously and had seen a leucistic Mallard which I knew I could hang the rest the other photos around. As it turned out it wasn't that co-operative so I shot the Canada Geese and Mallards (Fig 1) in the vertical format and used that as the main artwork.
I used ©InDesign to combine the images and text on the page but it could also be done in ©Photoshop if one is using images only. 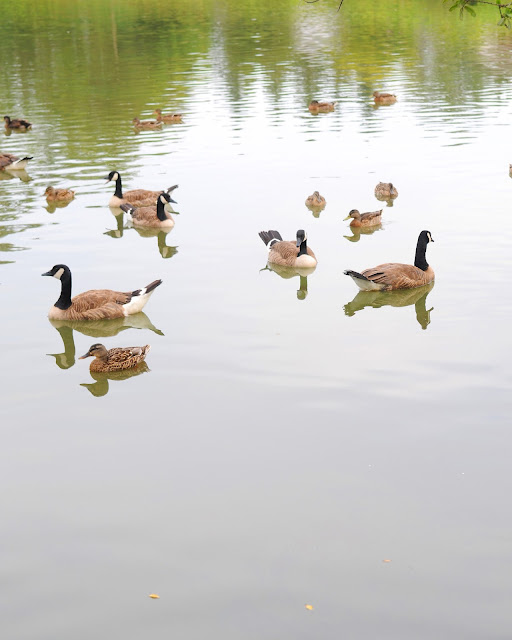 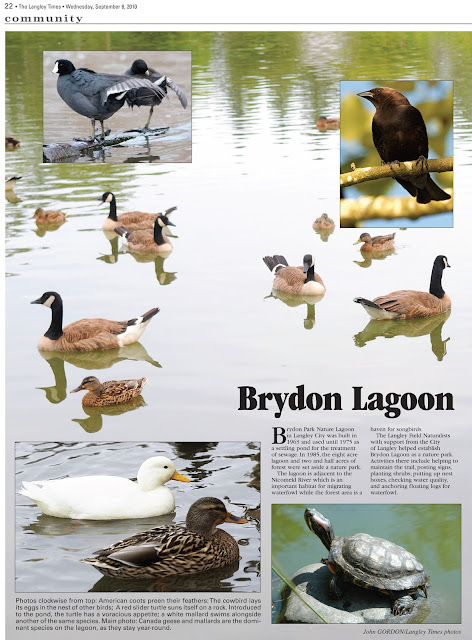 There are some important considerations when contributing to a publication.
Colour files should be jpeg or tiff and be saved at 300 DPI. While 8x12 is usually large enough a higher resolution image can always be supplied if requested by an editor. It is very important to leave some space around the image so that the editor can fit into the available space. If possible send both a vertical and horizontal shot of the subject, that way you may find your shot being used on the cover. 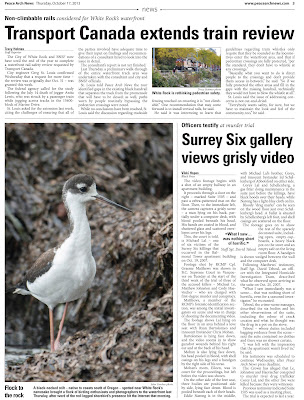 The Black-necked Stilt had been around the White Rock area for a few days so I sent the picture to the editor of the Peace Arch News knowing that it would be of interest to local readers. It was published the very next issue.

The most important factor of all is actually the submitting your work to publishers, magazines and newspapers when and if you think it might me newsworthy, if you don't try you'll never get published. 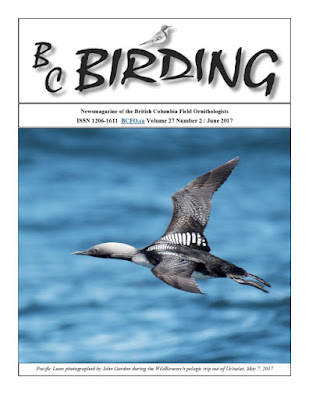 The Black Phoebe was proving to be elusive. Eventually an hour into our search Tom Platt and his son located the flycatcher over the sewage lagoon. The bird was hawking insects low to the water, we never did get close enough for a photo, just fleeting views but views nevertheless. It was a lifer for many of us. Over the next few days the bird proved to be incredibly elusive, finally disappearing into the ether never to be seen again.
During the wait an American Goldfinch landed close to me and began to feed on thistle seeds plucking several at a time sending the feathery part into the air like a miniature parachute.


Below, a Kildeer chick scurries along the 'muck' at Iona. Since I took up birding I have visited more sewage lagoons than medieval cathedrals...just saying!

Now in the first week of August the shorebirds the migration is beginning to get into full swing. I've
visited Boundary Bay a few times where Westerns and Baird's are now turning up on a regular basis. One evening there were just flocks of Least Sandpipers. The flocks of Black-bellied Plover are worth looking over for American Golden Plovers.
Now that I have sorted the garden, the repairs to the house are completed I can get back to the birds. I hope to see you out there. Good birding to you all.