Rare Bird Alert. A Red-backed Shrike had turned up on BC's Sunshine Coast. A MEGA find if there ever was one.
The shrike normally breeds in Europe and Western Asia and winters in tropical Africa. Twitchers began frantically checking ferry schedules and booking hotel rooms. I wasn't so quick to react. I thought about it for a full three days before I got my act together and decided to make the six hour, two ferry trip up the Sunshine Coast and beyond to the bustling metropolis of Powell River. It would be a 12-14 hour day trip. Prior to leaving I decided to hedge my bets and stay overnight. That would give a me a better chance in case I dipped on my arrival. I am glad I did.
Arriving at midday I arrived in Powell River and headed for the stakeout (see above) where a number of other birders had been patiently waiting for several hours. There was a bitter cold with blowing off the Salish Sea. I wore three layers and I was still shivering. Eventually three hours later and as the light began to fail the shrike finally appeared. I quickly captured some so-so video footage on my Nikon P1000 bridge camera.
Red-backed Shrike Video
The camera has excellent 4K video qualities and has a 24mm-3000mm which proved ideal for this particular twitch where we couldn't approach too closely.
The P1000 is not a replacement for a DSLR or a quality mirrorless but not everybody wants to go that route. I then switched to my D500 and 200mm-500mm F5.6 Nikon zoom for some crisper shots by which time the light had dropped and I forced me to shoot at ISO 1000 to get enough shutter speed. The light was terrible but photographers have to work with whatever is available. Thankfully the rain held off.

I stayed at the historic The Old Courthouse Inn which is unique in every way and well worth visiting
even if it's only for breakfast. I had a restful stay after my long day's drive and headed out next morning
to try my luck for the shrike again. There were already birders from Nanaimo when I arrived. It wasn't long before I had to peel off two of my three layers, a complete change in weather from the day before. This time the bird was in the same garden where it had taken up residence. The owners of the house were very gracious allowing an ever growing numbers of birders to keep watching the bird, one twitcher flew in from the Okanagan another from Ontario.
This time I managed to get a few frames off without flushing the bird while the newly arriving birders eagerly searched for the bird. By noon there were no more sightings which meant more than a few returned home without seeing the bird. Those who stayed were luckier next morning.

A few days later I procrastinated again and missed the the Prairie Warbler in Kelowna so I may have to get my act together or just not worry about chasing every bird that's reported. 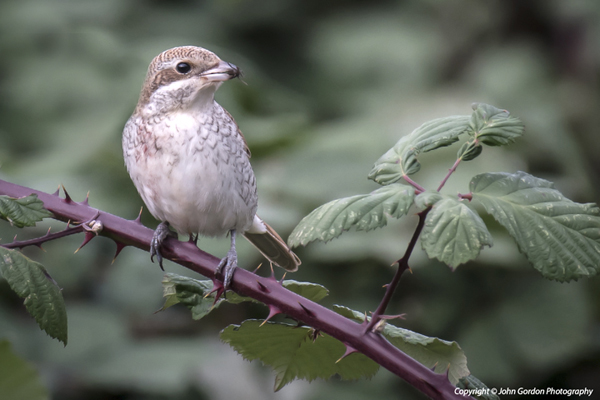 "It's never a good idea to procrastinate"

In September a few DRBIPA members, supporters, and volunteers headed out on a socially-distanced guided nature walk at Derby Reach - with John Gordon, professional photographer, author, and Langley Field Naturalist. We learned about letting ourselves be encompassed by our surroundings and how this can help nature photographers. John also shared some of his best tips and tricks for getting good nature shots. It was a great morning out in the park surrounded by trees, even in the rain!

Forest bathing is simply spending time outdoors under the canopy of trees and immersing oneself in the forest and soaking in the atmosphere through the senses. John taught us about his approach to forest bathing, about being still and silent until the quiet forest becomes alive with sounds and sights you didn't know were there. A perfect activity for nature photographers and all nature lovers!

According to Dr. Qing Li, author of Forest Bathing: How Trees Can Help You Find Health & Happiness, the key to unlocking the power of the forest is in the five senses. He advises to let nature enter through your ears, eyes, nose, mouth, hands and feet. A two-hour forest bath will help you to unplug from technology and slow down. It will bring you into the present moment and de-stress and relax you.

Bird Watching During a Pandemic

A few weeks ago Black Press contacted me about an article they were putting together about birding for seniors. Birding has seen a huge spike in popularity in recent years among all age groups but particularly seniors. Despite the current situation with Covid-19 many groups and clubs are still offering opportunities for seniors and others to get out in a responsible manner. One example is the Langley Field Naturalists, other groups are also offering walks that follow strict social distancing and health protocols. We have had numerous walks around the Lower Mainland and we even have some new faces attending. I've met many who are despondent and are having a tough time with the isolation. To those I  I urge you to get out on your own, with your family unit or in a safe group and take walk in the forest, listen to the birds, take a very deep breath, relax and try to put everything into perspective. Nature is perfect and it will see us all  through these uncertain times.

*Note: Since the article was published just a few weeks ago cases of Covid-19 have begun to rise and the health authorities are asking everything to take even more precautions. Please keep this in mind when you read the article.

Follow the link below to read the whole story.

Link to Birdwatching during a Pandemic

"Its never too late to get out birding"