Mar 21 Green Heron shots with the SX50 HS at Brydon Pond.
I try to go for a quick walk everyday so I usually pack a point and shoot. I'm glad I did.


As I have mentioned in earlier blogs to get the best out of the CanonSX50HS for birding set the camera to Scene Mode and choose the High Speed Burst HQ. It can be accessed through the Function Set button. It shoots 10 frames a second at Full Res, don't ask me how it works but it does. The Bushtit above is one of five shots I had to choose from, the other four frames had no birds at all. Anyway, readers have told me that they have bought the camera and enjoy it immensely.

A Windy Day/Change of Seasons


Monday was just one of those days. For most of the day the wind was so strong that our avian friends were nowhere to be seen.

The only way around the dilemma was to head for an area protected from the gusts of wind coming off the ocean. So it was off to Harbour Park in Ladner. Twelve months ago I photographed a White-throated Sparrow at the car park but today it was eerily quiet.

Sure enough my hunch was correct, the first bird to show was an Anna's Hummingbird. Then a few Chickadees and Bushtits flitted around but not much else.

A quick look around the parking lot turned up a pair of Brown Creepers, one of which kept still just long enough for a few frames.
The migration across Canada has begun. Many birds in British Columbia are already on the move. The return of the Rufous Hummingbird, Tree and Violet-Green Swallows and others signal the change of seasons. Soon the warblers will be here on masse, the Long-eared Owls long gone. The cycle of Nature continues.
Assignment:
I have been trying to compose pictures showing more of a bird's surroundings. I haven't been too successful so far. In this picture I have tried to create a composition with the owl acting as a visual cue (diagonal line) leading to the bottom right of the frame and back again to the owl.

Here it is, better late than never.

Thanks everyone for enlightening me about the tagged Red-tailed Hawk. Here is Gary Searing's response posted with his permission. I know some of you registered some concern about the size of the tag but I believe it provides important information as laid out below.  Also check the footnote here and reader feedback from the previous posting.

Thank you for reporting your sighting of N2. This is great information.
I tagged her as an After Third Year bird at the Vancouver International Airport (YVR) on 5 September 2013 and released her the next day  in Chilliwack, BC as part of a program to prevent raptors from being struck by aircraft. Yours is the first sighting of this bird since that date. Let me provide you with some information on the program so you understand a bit more why we are doing this:
YVR began a program of trapping and removing Red-tailed Hawks and Rough-legged Hawks in October 2010 in order to prevent them from being struck by aircraft primarily to improve air safety, but also as a raptor conservation tool. Each year the airport has a large number of transient raptors that winter at YVR as well as resident adults and local-raised young birds. Based on information from SeaTac International Airport in Washington, we expect that adult residents are least likely to be involved in collisions with aircraft, but a significant number of young birds and transient birds are struck each year. Therefore, we are attempting to remove those birds from the airport environs by capturing them and releasing them just beyond Chilliwack where there is ample habitat and a reasonable likelihood that they will not return to YVR. I view this not only as an air safety program, but also as a raptor conservation program because, if successful, we may prevent the deaths of a dozen or more birds each year. We expanded the program this fall to all raptors (including owls). To date we have captured and relocated over 225 birds. Most of them were relocated to Chilliwack.

We are wing-tagging Red-tailed Hawks because we need to know who our resident birds are and are co-operating in a joint program with Seatac and Portland International airports all of whom are wing tagging airport Red-tailed Hawks (using different colours for the tag material). Not only is this program contributing to air safety, we are already learning a great deal about our wintering raptors and hope to learn much more as the years pass. To date we have captured about 100 Red-tailed Hawks of which less than a third, mostly resident adult birds or  long-term wintering residents, have returned to the airport. Less than 20% of the very hazardous juvenile birds have returned. Several of our birds have been seen in Washington State and as far south as Oregon and we have had a few birds from Washington State come to YVR. We have had one sighting of a tagged Red-tailed Hawk near Kamloops. In addition we have captured 10 Rough-legged Hawks of which 2 returned to YVR, 2 Snowy Owls (1 returned), over 70 Barn Owls (only a few have returned), and smaller numbers of Great Horned Owls, American Kestrels, Peregrine Falcons, Coopers Hawks, Sharp-shinned Hawks and Merlins a few of which have returned to YVR. Raptors are one of the major strike risks at YVR and we believe that we are mitigating that risk significantly through the capture and relocation of raptors.

It is through the sightings of many interested persons such as yourself that we are able to collect the essential information on bird movements and distribution and learn how well the measures we are using to manage wildlife at the airport and elsewhere are working.

Thank you for your cooperation and your interest. Feel free to contact me for more information or with any sighting information. 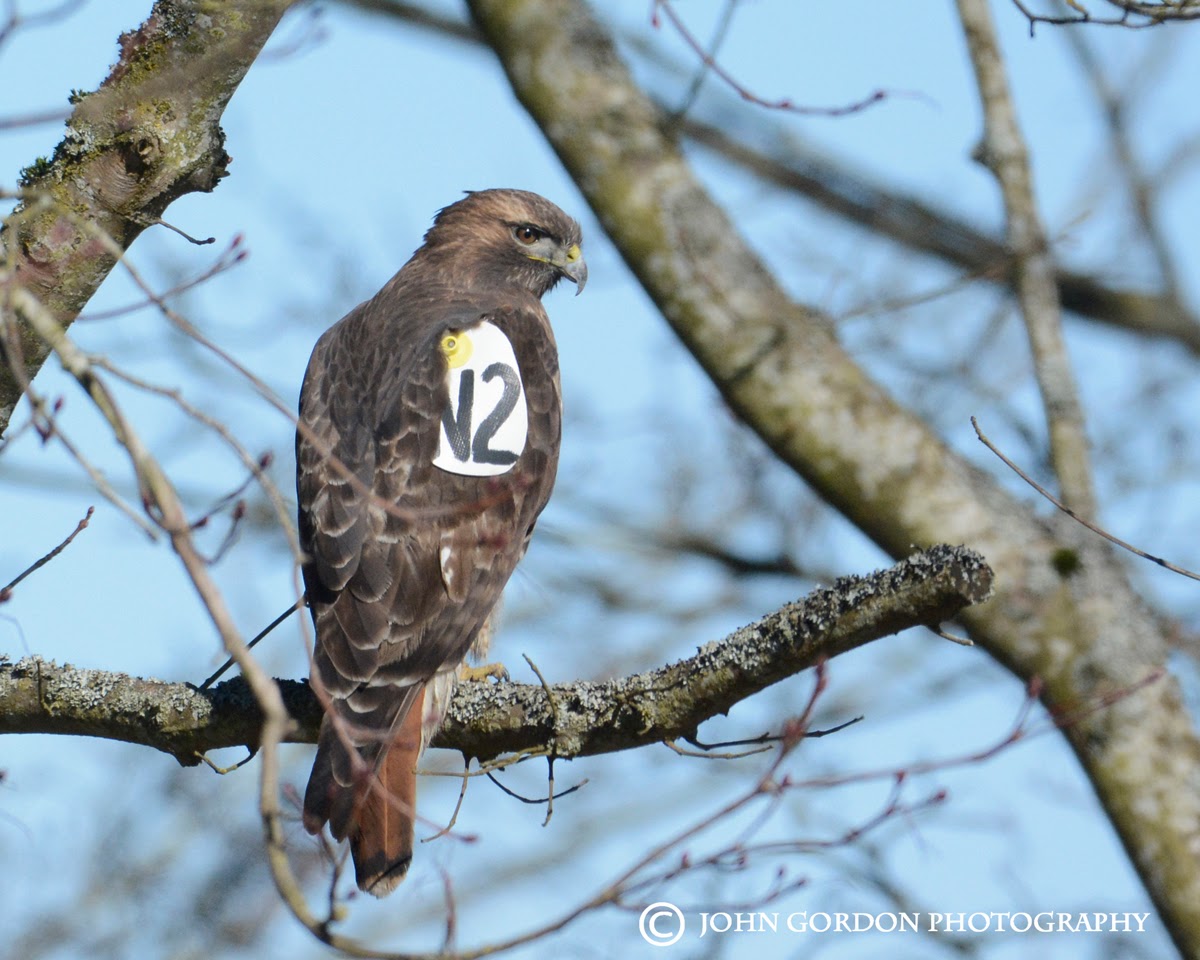 Go ahead and post away - the more the word spreads the better since I rely on sightings for my data.
Yes, the tags are relatively large, but this dramatically increases the flightability of the tags and hence the number of re-sightings of each bird. My colleague and I have been using this type of tag for more than a decade with many hundreds of birds tagged. There is absolutely no impairment of flight or other behaviour. Tagged birds that return to the airport resume their territorial behaviour, breed and successfully raise young. If the tags had a negative affect in any way, we would not use them since one of the reasons we are doing the program is for the safety of the birds (as well as air safety).

I wasn't until I arrived home Monday evening that I realized I had sunburn. I had been birding all day, so engrossed by all the activity around me I had completely forgot the sunscreen. Sunscreen in March, who would have thought it, eat your hearts out Winnipeg! It was cloudy in the morning but by midday the light was fantastic for photography. Blue skies allowed the use of fast shutter speeds, just enough to catch up with the speedy Prairie Falcon. I had photographed the bird before but I wasn't quite happy with the results.
The first signs of Spring were everywhere. The trees are filing out, buds waiting to explode for the soon to arrive waves of warblers and flycatchers. A Turkey Vulture circled overhead, a pair of Lincoln Sparrows looked to be staking out a nest site, even the Tree Swallows have arrived, what a time to be a birder!
The day began with a trip to 104 St and Hornby in Ladner to see if I could re-locate the Leusistic Red-winged Blackbird (see previous blog) but the bird could not be found. From 104 to 72 I counted forty or so Bald Eagles, six Red-tailed Hawks, and a smattering of Northern Harriers. I couldn't find the Glaucous Gull.
At Tsawwassen kite surfers took up much of the real estate but a small flock of twenty Brant bobbed about on the waves, Common Goldeneye dove for shellfish but the wind made photography difficult.  Then on through the Indian reserve and onto Brunswick Point which is where the real fun began.
The first picture in this series came about when I observed what I thought might be a hawk in a hedge. The bird turned out to be the Prairie Falcon. It normally perches high up on poles or trees so to see it so close was quite a surprise. I stopped the car and grabbed my camera. Unfortunately the bird was flushed by a passing pickup but as it flew into the air and away from the tangle of branches I was able to get this clean shot with the blue sky as background. Finally a half decent shot .

The Prairie Falcon then flew along over a fallow field chasing a Norther Harrier.

At the End of the Day

What can I say. Another great day out of the house, not a care in the world except making sure that I didn't get run over by farm traffic. As I mentioned the weather is changing here in B.C.and soon we can all expect a flood of migrants including the sandpipers and warblers. I for one can't wait.

Leucisitic Red-winged Blackbird and Others.

Mar 7 2014 Birding in Delta and Richmond/Overcast