"Have you heard?
The birds are back again
But I don't know when
They'll fly away"
(from Northern Lapwing)

Recently a list serve group based in Vancouver BC (vanbcbirds) had a very interesting thread where birders sent in examples of their favourite songs with birding titles and themes.
Steve Miller's Fly like a Bird, Leonard Cohens's Bird on a Wire and Incredible String Band's White Bird to name just a few. One favourite wasn't really a song but could easily be, Why can't they all be California Gulls, a play on the Beach Boy's California Girls.
The threads went on for weeks and was lots of fun. During my search for songs with birds as subject matter I came across a delightful and recently released album by New Jersey songstress Stephanie Seymour titled There Are Birds.

Stephanie is not only an accomplished musician backed by exceptional musicians she's also an avid birder. The liner notes have a picture of Stephanie with her 500th ABA bird, pictures of her birding in New Jersey and one of her birding on the way to a wedding, nice dress Stephanie!

One of my favourites is the evocative Veery. Having chased the elusive Veery this summer I could easily relate to lyrics. Another favourite track is a song about Emily an injured House Sparrow that Stephanie nursed back to life after the hapless sparrow hit a window. I was there all through the song as would anyone of us who have ever nursed an injured bird back to health.
There are twelve others songs about Blue Jays, Black-throated Blue Warbler, Ruby-crowned Kinglet and other species. Stephanie has managed to garner a lifetime of birding memories into a memorable collection of songs that has been playing non-stop in our house.


You were weak, you were so weak
But food and water made you stronger
You had spunk, you had a lot of spunk
You watched my eyes as I sat by your side, singing

Two hours later, you were as good as new
We brought you to the open window
Where we thought you’d fly right through
Whoever said “bird brain” never knew you
You looked back at us to say “thank you”
And then you flew

Below are a few comments from Stephanie's website and a direct link for lots more about the album.

Listen and order the album


Q: Can you talk a bit about the making of “There Are Birds”?
A: We recorded and mixed in the Bald Eagle room at Chrometop Studio, which is in our basement! Bob has created a fantastic environment. We have some excellent echo effect happening in our stairwell, so at one point co-engineer Scott Anthony suggested putting a mic in there to pick up some of that effect for the hard-rocking “Violet-crowned Hummingbird.”
Sim Cain (drums) and Ray Nissen (bass) completed all the basic tracks in one insanely fun weekend. Then Bob and I overdubbed guitars and vocals at our leisure and would pass off semi-finished songs to Ray, who wrote and arranged the brass and orchestral parts. The horn players recorded here for a day, as did Charlie Giordano (E Street Band), who played two of the most beautiful accordions I’ve ever seen.
Q: How did you decide which birds to write about?
A: Many of the songs arose from actual events. For example, “Veery” is about going to my local nature center Flat Rock Brook when we lived in Englewood, NJ, and happening upon an unusually friendly Veery during migration. I sat down on the hill overlooking the horseshoe boardwalk, and the Veery kept hopping around me and listening to me talk to it. I went back the next day and there it was, and we did the same thing again. I visited the bird for a couple weeks until one day, it was gone.
“House Sparrow” was written about a bird that Bob rescued when he was mowing the lawn. She was nearly dead, but we took her inside and I put her in a box and gave her some water and food. I sat with her for a couple hours and sang to her, and I named her Emily. When she recovered, we tried to get her to fly out the window, but she got disoriented and started flying all over the room. Bob found a broomstick and got her to sit on it, and we took her over to a window and extended the broomstick far outside, so she wouldn’t mistakenly fly back in. Before she took off, she turned around and looked right at us, as if she were saying, “thanks for helping me,” and then she flew away and landed in a tree next to some other House Sparrows. I understand that House Sparrows are not native to this country, and I know they are considered pests (to put it nicely), but that bird needed help, and I wasn’t going to let her die if I could help it.
Other songs came about from the desire to write about specific birds, such as the Black-throated Blue Warbler, which is my favorite warbler. I was searching through my old lyric books on a whim and found what are now most of the verses for “Black-throated Blue Warbler,” although I rewrote some of them to fit the sentiment of the song. I wrote new lyrics for the choruses, and I thought it all fit together perfectly. My goal was to convey how migration evolved over a great expanse of time and how it is innate within the birds.

Tis the season for Covers

After a thirty plus year career of publishing photographs there's still a thrill of seeing one's work published. As I have written before I cannot see the point of storing away thousands of images on a hard drive. To that end I often donate images for non-profit use or for educational purposes and are more than happy to see them used to promote the well-being of birds and their habitats.
Back in the day when I was gainfully employed I would look forward to seeing my work grace the front page, the sports and entertainment pages and occasionally provincial and national newspapers. My favourite subjects were the people involving themselves in the community. Almost a decade later the rush of being seeing one's images still lingers so when it was brought to my attention that one of my bird images had been used on the cover of Indulge I was really chuffed.
I'd like to thank Tracy Holmes for putting together such a well written and well thought-out article and that it sparks readers to get out and go birding and hopefully discover a whole new world.

Click link below for an easier to read PDF

The picture below was taken on Cypress Mountain by Carlo Giovanella. The Canada Jay was a year bird for both of us. 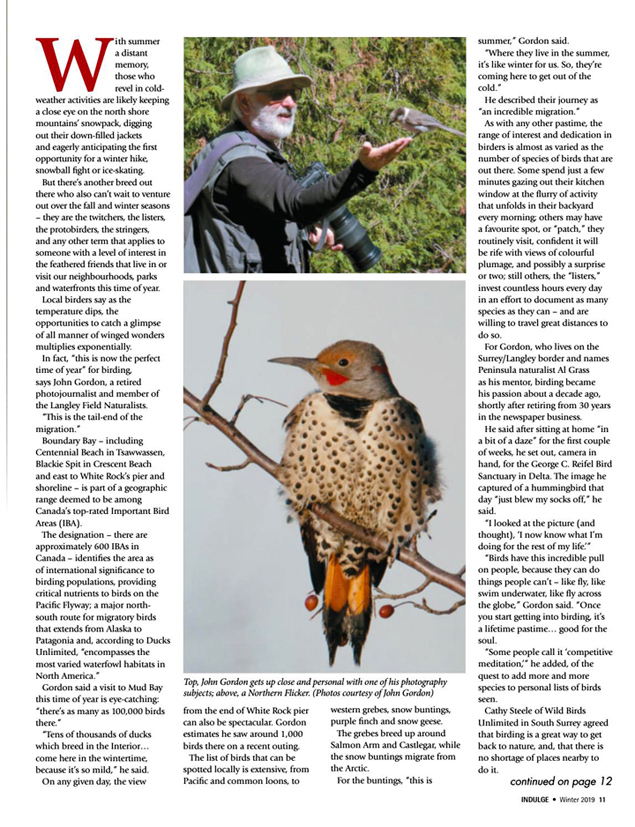 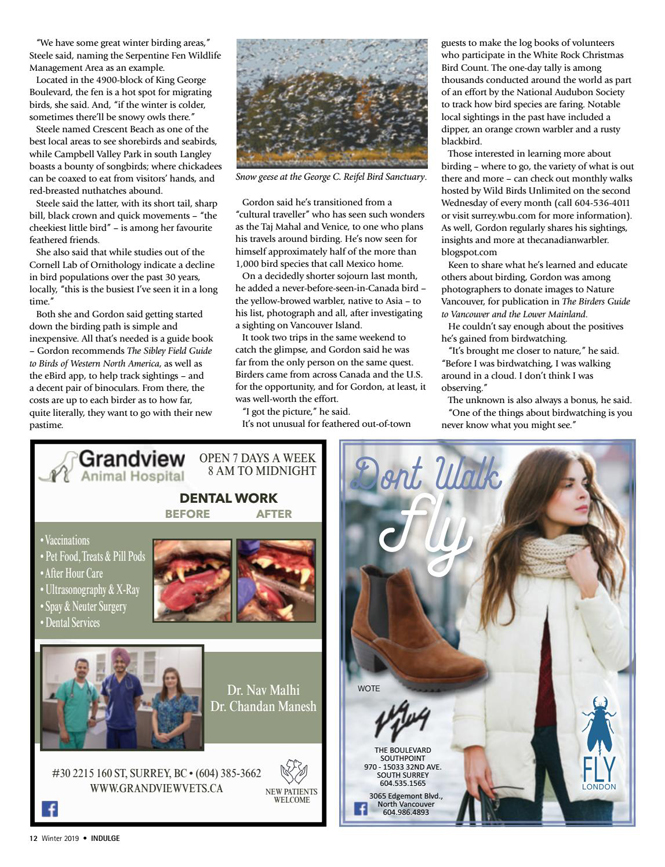 The second cover appeared in BC Birding. I often supply images and copy to the quarterly publication as I know editor Clive Keen is always on the lookout for material. If you don't submit then you'll never be published. 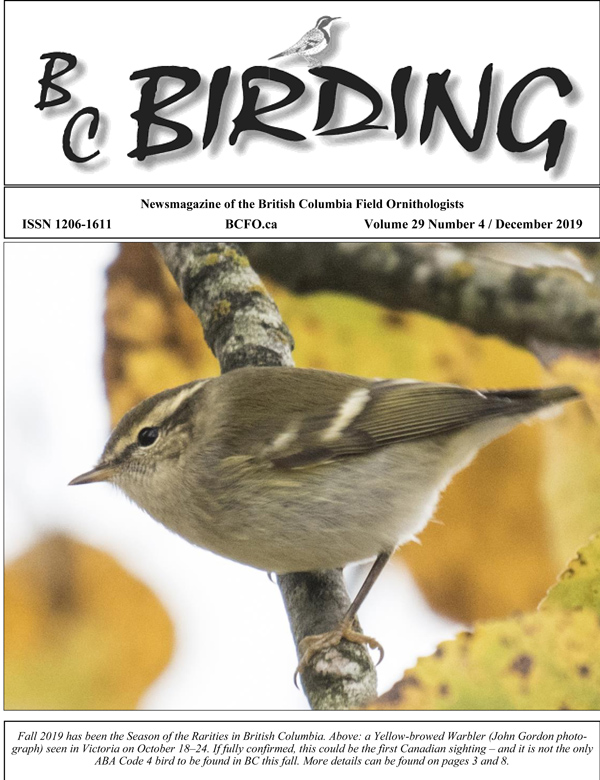 How to stumble on a good bird

How to Stumble on a Good Bird

Carlo (CAGI) and I had just spent a fruitless couple of hours enveloped in fog on Seymour Mountain. We had the crazy idea that there might be some good birds to see up there, we were mistaken. After a few hours in thick fog my extremities were frozen and I felt really grumpy, likewise CAGO was sore from a pulled muscle. Our Seymour count was precisely two Dark-eyed Juncos. Slim pickings indeed.
We decided to head down the mountain and pop into North Vancouver's Maplewood Flats on our way home. Along the  trails the autumn colours were breathtaking but again we came up with no birds, not even a Song Sparrow.
We were almost back to our car when we spotted a mixed flock feeding next to the wooden bridge over the creek. A couple of Ruby-crowned Kinglets, three Yellow-rumped Warblers and couple of Black-capped Chickadees. The warblers were hawking insects and the others gleaning insects from the shrubs. At first the warblers drew our attention, perhaps an elusive Palm Warbler but alas none were present. The kinglets looked a lot like kinglets but....

...one bird stood out. Small and gray, a little like a bushtit but the posture looked odd and the bill was long, could it be a gnatcatcher I thought. Before we could get an ID it flew off to a nearby tree. I managed to get a quick pic, showed it to Carlo and he agreed, it was indeed a Blue-Gray Gnatcatcher.


The bird was my 239 2019 Metro Vancouver and a new BC bird.
So what started out as a day to forget became one for the record books. Suddenly my frozen parts were as warm as toast and the ride home was filled with satisfaction of another day well spent.

The 6th for Metro Vancouver 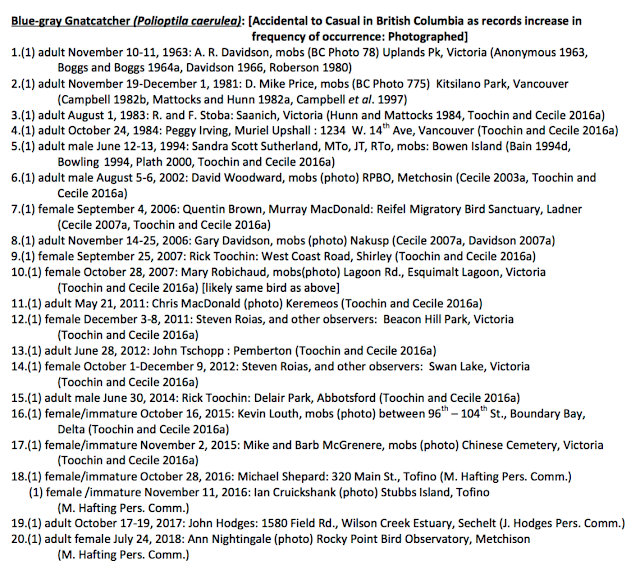