Black Turnstone "Another Lifer" and others

Reifel Migratory Bird Sanctuary was very quiet, a few Wilson's phalarope, two Long-billed dowitchers, Green-winged teal but not much else in the ponds. The firs and alders however were crawling with red-breasted nuthatches, yellow and orange crowned warblers (see below) black-capped and chestnut-backed chickadees searching for insects. The spotted-towhees were and are still looking a bit ragged as were a few of the other small song birds.

I then left for the ferry terminal at Tsawwassen to explore the area close to the pilings at the very end of the breakwater. Despite the sun being too strong for effective photography I decided to go ahead anyway, nothing ventured nothing gained... Eh!
Within minutes I spotted a flock of about twenty five Black turnstones feeding along the edge of the shoreline. The flock appeared to have a number of juveniles and were quite approachable. It took about forty-five minutes for them to make their way alone the rocky headland toward me. Eventually they came within twenty feet but with  the sun casting so many shadows and causing the seaweed covered rock to throw back specular highlights decent shots were a challenge. Anyway, here are a few shots which are OK, needless to say i'll be going back when the light is softer. 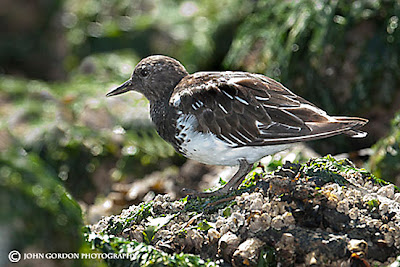 Marked by song, two new bird species discovered in the PHL
The Camiguin Hawk Owl and the Cebu Hawk Owl


What made them unique are their songs. Two new owl species have been discovered in the Philippines, after bird scientists analyzed recordings of them singing in the wild.

"When we first heard the songs of both owls, we were amazed because they were so distinctly different that we realized they were new species," said zoologist Pamela Rasmussen, the lead author of the scientific paper announcing the findings.

"The owls don't learn their songs, which are genetically programmed in their DNA and are used to attract mates or defend their territory; so if they're very different, they must be new species," she added (listen here to Philippine Hawk Owls).

One of the new species, the Camiguin Hawk Owl, often sing in duet while facing each other, with a distinct growling tone instead of the high-pitched melodious song usually associated with birds. The other new species is the Cebu Hawk Owl, of which there has been only one specimen sighted.

Reputed to be a center of global biodiversity, the Philippines is home to nearly 200 endemic bird species, or birds found only in the archipelago.

"More than 15 years ago, we realized that new subspecies of Ninox hawk-owls existed in the Philippines," said Rasmussen. "But it wasn't until last year that we obtained enough recordings that we could confirm that they were not just subspecies, but two new species of owls.”

Philippine Hawk Owls are a type of "earless" owl that is common and endemic—or native—to various parts of the country. Earless owls are those without ear tufts, or feathers around their ears. The owls do have ears and use them to communicate and hear themselves.

Rasmussen is the lead author of a paper on the Philippine Hawk Owl (Ninox philippensis) and its various subspecies. She is an assistant professor of zoology at Michigan State University and assistant curator of mammalogy and ornithology at the MSU Museum.

MSU said in a statement, "Announcing the finding of a single bird is rare enough. But the discovery of two new bird species in a single paper is so rare that Rasmussen and the other researchers couldn't recall the last time it happened.”

This study is featured in the current issue of Forktail, the Journal of Asian Ornithology.

One owl species, the Camiguin Hawk Owl, was found at the foot of Mt. Timpoong in northern Mindanao’s island-province of Camiguin. The study described the hawk owl as having a distinct bluish-grey to whitish eyes, and a recognizable and unique song.

“It is vocally highly distinct, normally giving a rapid, low-pitched duet, the two birds facing and leaning towards each other while very close together, with white throat puffed out and pulsating, wings drooped,” said the study.

"At night, it gives a long solo song that builds in intensity, with a distinctive low growling tone. Pairs of owls give short barking duets that start with a growl,” MSU said in a statement.

The other owl was the Cebu Hawk Owl, which was first thought to be extinct due to deforestation. The study described it as the “sole known specimen in existence,” which is closely related to the Mindoro Hawk Owl.

According to the Wild Bird Club of the Philippines, the country has "an astounding mix of more than 600 species of resident and migratory birds, of which almost 200 species are endemic."

Philippine rainforests are also home to 102 species of amphibians, 179 mammals, 254 reptiles, 20,940 insects, and 15,000 kinds of plants. — BM/DVM/HS, GMA News
We welcome healthy discussions and friendly debate! Please click Flag to alert us of a comment that may be abusive or threatening. Read our full comment policy here.


http://www.gmanetwork.com/news/story/270490/scitech/science/marked-by-song-two-new-bird-species-discovered-in-the-phl
Posted by John Gordon at 10:38 No comments:

When the Sora runs out into the open, you have to be quick to get a photograph, the diminutive bird rarely sits still for the constant parade of photographers, birders and bird lovers.
Also, a big thanks to Reifel staff who pointed out the stilt sandpipers, the Phalarope and especially the Sora which gave a special show, presenting itself every fifteen minutes or so to the delight of all present.


Another great two days of birding. More picture to come.

After the parrot show I then took a walk along the path by the allotments and came up with a Solitary sandpiper which makes it a "Lifer" for me. I was able to spend fifteen minutes with the bird before it was frightened off by joggers.
By 9 a.m it was to hot to be lugging around gear so what with the Cooper's hawk and the parrot (or whatever it turns out to be) I managed to come up with a few more birds to share. These are not definitive shots but rather than storing them away on a hard drive here they are.

6.06 a.m. Aug 16th, 2012 Blackie Spit, Crescent Beach, Surrey
The sun had just risen and with the Lower Mainland experiencing a sweltering heat wave the "sweet" morning light is the best and only time for bird photography. It's just way too hot!
The tide was beginning to ebb and twenty or so Caspian terns could be heard laying claim to a newly exposed sandbar. Suddenly out of nowhere, a Cooper's hawk unsuccessfully chases down a very young rabbit. To my left a Savannah sparrow perches on a withered Yarrow stalk and then a very strange call I hadn't heard before. I thought it was a Stella's jay mimicking so when a parrot like bird glides past, its long yellow-green tail and prominent orange beak catch both my and the Cooper's attention. The Cooper's and the parrot both take off in the same direction,  I fear for the parrot but they perch in different trees. Although not too tame, I eventually was able to get close enough to fill the frame (see below)
Either this is a case of global warming or most probably an escapee, but aren't parrots from way down by the equator! I wonder if it had hitched a ride up on the back of one of Vancouver's Brown pelicans! At present the bird is adapting to the freedom that all birds should have, hanging around the many fruit trees that have been planted at entrance to the spit.
Meanwhile I have sent a picture to the Peace Arch News to see if anyone recognizes their pet, catching it will be another matter!
On a recent trip to Richmond Park just out side London, hundreds of Ring-necked parakeets have adapted to the sometimes harsh UK winter and have become somewhat of a nuisance, taking nesting sites from woodpeckers and other cavity nesters.
Perhaps this bird will find a home here but I don't know if I would put money on it! .

Here are a few more birds that I have photographed during my U.K. visit. It has been an exciting time photographing unfamiliar birds and frustrating because so many are in moult but with a dozen or so new birds to add to my list my tally has been better than the combined GB and Canadian Olympic medal count!