Monday Morning: Before the Deluge

The weather forecast predicted rain for the week, up to 30 cms, a month's worth in three days. However Monday morning was warm and a little sun did manage to peek through the looming storm clouds. It was perhaps the last opportunity to bird for the next few days.
The tides were high, in places flooding over the spit. Gone were the ever-present Common Loons and the Long-billed Curlew, only a few Green-winged Teal and Mallards were left to battle the waves.
Overhead six Bald Eagles sparred for partners, one with a large stick in its talons headed towards its nest. A Merlin flew past at speed. A Golden-crowned Kinglet flitted from branch to branch. A pair of crows drew my attention to a tree where in it a Sharp-shinned Hawk was eying its next meal. 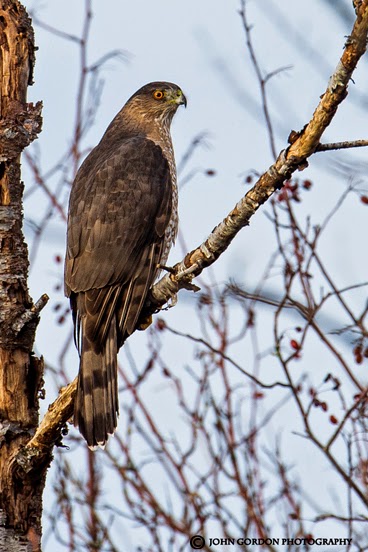 I have cropped this image to lose as many of the distracting elements as possible. I have the left hand side anchored by the tree while the branch exits the frame at the top right. The bird is placed in a frame within a frame. Just some of the thought processes us photographers try to apply to our work to make it more interesting to the viewer.

What drew me to this bird? The delicate way it posed on the bush. The catchlight of the sun in the eye, the Pacific crabapple (Malus fusca) on which it feeds tells a story. There was no need to zoom in and lose the context.

When I first got hooked on bird watching and bird photography I had seen House Finches but never a Purple Finch. I took as many bird walks as possible including one with expert birder Larry Cowan. During one such tour I saw my first Purple. I'll never forget what Larry said to our group.
The difference he said was the Purple Finch looks like it has been "dipped in strawberry jam"


A few metres along the trail a flock of the similar looking Purple Finch, four females and one male were also feeding on the crabapples.
This male Purple Finch has an unusual colour to it. The yellowish hue comes from shooting through a tangle of branches with the aperture wide open. There were till a few yellowish leaves left on the branches. By shooting at the largest aperture i.e. F2.8 or F4, close-by obstacles like shrubbery can be softened and almost made to disappear.

I learnt this trick when I used to shoot baseball for the newspaper. I would stand behind the fence just looking over the shoulder of the catcher and batter and focussing on the pitcher. By shooting wide open the fence wouldn't show up and it looked like there was no obstacle in my way as the pitcher threw. I would catch the ball leaving the pitcher's hand. Try this at F8 and the fence would to show. The other upside is that a wide open aperture tends to give the photographer a higher shutter speed, perfect for bird photography.

As for the photograph above, the end result is an image that I might not have thought about attempting had I not used this technique elsewhere.
The next shot the female was in the open.