I just couldn't handle being indoors anymore. I had promised myself a lazy Sunday afternoon watching a few games of 'footy' from England. Then on the spur of the moment I decided to forsake my Sunday paper and comfy chair and go birding. The logic behind the sudden change of plans were two fold.
First, I glimpsed a thin band of blue sky in what was otherwise a pretty dreary day and secondly and most importantly, the wife had decided to have a long, long afternoon nap. No other incentive was necessary. I quickly put the roast in the oven (with instructions not to burn the house down) and made my way to 72nd Ave.
I was hoping to find an American Tree Sparrow or two. The cunning plan was to be home just in time to make the gravy, wake up the wife and have a pleasant Sunday evening.
Arriving at 72nd I bumped into Liron, we chatted about our respective birding adventures when the two of us noticed a group photographers pointing their lenses at what turned out to be a Long-eared Owl. It was the same bird as my previous blog. This time it was in a slightly better position so I spent a few minutes photographing it again but with a clearer view. This time I was also armed with a 500mm prime lens so in theory I would get a sharper shot. The previous blog I used the 150mm-600mm Tamron. I include an un-cropped image and a tight crop to show off some of the interesting features of this beautiful owl.
Blooger's algorithm unfortunately doesn't do these images justice they seem to be a little soft on my screen. I'll post them to my Flickr to see if they look better. 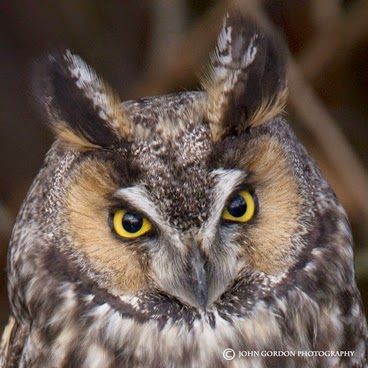 Oh yeah, the roast was delicious as was the Yorkhire pudding!