We crossed the Grijalva River, and were now in Tabasco. Next up was Palenque, in Northern Chiapas, a popular ruin with tourists. We walked along the main road up the hill to the archaeological site, and were rewarded with some fantastic birding! Highlights included 3 Scarlet Macaw, which provided awesome photo ops. We watched 3 Brown-hooded Parrot, 6 White-fronted Parrot, and 2 Olive-throated Parakeet (Aztec). A great find was a Grey-headed Dove, tough to see as it crawled over bushes, and along the ground.


Palenque seemed to be the top hummingbird spot, with 2 White-necked Jacobin, 2 Long-billed Hermit, a Stripe-throated Hermit, 2 Rufous-tailed Hummingbird, and 2 Buff-bellied Hummingbird. Sparrows seen were Olive, Green-backed, and a striking Orange-billed.


Warblers included a much sought after Worm-eating! Other nice finds were a Wedge-billed Woodcreeper, and Yellow-bellied Flycatcher.


Sometimes on Eric's tours, I've found myself thinking, the birding surely can't keep getting better each day, but it often does. We would return to Palenque on our final day, but for now we had the very exciting prospect of Yaxchilan! Ramon pointed the van south, and we made our way along a fairly tight road that took us through an agricultural valley. In the distance we started to see the mountains of La Selva Lacandona in Guatemala, and the Montes Azules Biosphere Reserve in Chiapas, memorable scenery.


We stopped at a side trail for some leisurely birding prior to our arrival @ Frontera Corozal. This trail revealed 10 Montezuma Oropendola, 3 Little Tinamou, and a Black-faced Antthrush (Mayan). Seeing tinamous was incredibly exciting, a totally unexpected surprise. We watched them as they crossed the trail, one flying in behind a walking bird, as if to hurry it up.


We arrived @ an eco-hotel in Frontera Corozal. On the west side of the Rio Usumacinta, we were in the State of Chiapas, Mexico, and on the east bank, was the Departamento of Peten, Guatemala, and the community of Cooperativa Tecnica Agropecueria. Try saying that after a few cervezas!
Lanchas (river longboats) ferry folks across to Guatemala, and down to Yaxchilan, another famous ruin, and legendary birding hotspot.

A Scaly-breasted Hummingbird was a great find by the hotel restaurant entrance, and on the river we could see 6 Yellow-crowned Night-Heron, and egrets flapping around. An introductory burn upriver added Mangrove Swallow, Grey-headed Kite, 2 Grey Hawk, 3 Ringed Kingfisher, a Green Kingfisher, and 2 Red-lored Parrot.


Yaxchilan is a magical place! A few local guides joined us, and one of them brought excellent food along. I heard Eric ask where the food came from? One of the guys informed his mother made it, and Eric replied that he was moving to his place.

The small garden behind the entrance building was an excellent spot for drawing birds in from the jungle. We enjoyed watching a pair of Dusky Antbird, and a pair of Dot-winged Antwren. Other goodies were a Barred Antshrike, and Russet Antshrike, and we cleaned-up on antshrikes with a Great Antshrike in the front 'yard'.

We entered the ruins via a building with roosting bats. The beauty of the buildings, the grounds, and the riverside location, combine to make a really wonderful ambience. A Little Tinamou was heard, and 6 Plain Chachalaca made their predictable racket. An Ornate Hawk-Eagle sailed over. A male Lovely Cotinga showed briefly, feeding high atop a fruiting tree, and Eric hoped we could relocate it. A Northern Schiffornis showed well. Hummers included a Purple-crowned Fairy, and a Long-billed Starthroat, which dug deeply into some trumpet-shaped flowers.

A guy walked by and said, "Oh, here they are, it's the professionals, the birdwatchers are here!" With species such as White-whiskered and White-necked Puffbird making the list, I think we'd have laughed at anything.


We added Baltimore Oriole, Green Shrike-Vireo, Tropical Pewee, 2 Rufous-tailed Jacamar, and 2 Mealy Parrot. A Pale-billed Woodpecker was heard, and we enjoyed watching a Lineated Woodpecker visiting its nest hole. We saw a Black-cheeked Woodpecker. A Rufous-breasted Spinetail was a good find.

We walked to the airfield by the Usumacinta, perhaps the most uneven airstrip I've seen, though with neatly manicured grass. Something caught Ed's attention by the river so we moved in that direction. Eric had placed his scope by some nearby houses, and he suddenly beckoned us. I raced across the airstrip and was rewarded with three or four seconds worth of a beautiful Royal Flycatcher!

Although the bird led us on a bit of a dance, we did get eyes on it again. Perhaps the best of the best was seeing 3 White-collared Manakin, two males looking absolutely mesmerizing, as they snapped their wings. Lots of "oohs" and "ahs" for these guys! A sensational day of birding, and it wasn't quite over.


An owling session on Sendero Garganta, a little downriver from Yaxchilan, provided superb looks at a Vermiculated Screech-Owl, and we also heard a Black-and-White Owl.


The following day, we were venturing further along the river, passing Yaxchilan, in search of King Vulture. As we boarded the lanchas, we noted there were now 10 Yellow-crowned Night-Heron perched on some rocks, mid-river.
We spotted a White Hawk in Guatemala, and decided to go ashore. As the crew walked up the bank, they flushed an Iguana, which sprinted down toward the river, zigzag style. Ed carved the word "Quesnel" in the Guatemalan sand.

We continued along the river. We added Great Black Hawk, and another White Hawk, this one following a ridge on the Mexico side. 3 Collared Aracari, and 4 Keel-billed Toucan were watched. We stopped the lanchas by the big fruiting tree @ Yaxchilan, and yet again, a Lovely Cotinga was seen, but all too briefly. King Vulture appeared to be eluding us, until we turned around and headed back. The sky had been relatively devoid of raptors, but as the temperature warmed, we noticed some vultures soaring, two groups of three, and best of all, each group contained a King Vulture! They didn't move much closer so we had to be satisfied with the distant black and white.

Eric was determined to get decent looks at Lovely Cotinga so we returned to Yaxchilan. The birds were actively feeding, and moving around. There were other species in the canopy, and we were suffering from warbler-neck, so it was tough. A number of times, Eric had a cotinga in the scope, then it was gone. We eventually enjoyed a nice scope view of a female Lovely Cotinga.
A Stub-tailed Spadebill was seen, and we added 2 Red-legged Honeycreeper, and Green Honeycreeper. Ed spotted a male Red-capped Manakin, and it very conveniently flew down to some trees nearby, a dream for the photographers. A big wow moment! We showed this to a few English gals who we were chatting with, and they seemed suitably impressed.


It felt a little odd talking about Shropshire while birding in the Lacandona Jungle. 4 Black-faced Grosbeak were noted, as was a Blue-grey Tanager, and 5 Golden-hooded Tanager lit the place up even more. Some patient birding was rewarded with good looks at 2 Black-faced Antthrush, which crawled secretively along the ground, as a Central American Pygmy-Owl provided backing vocals. Yaxchilan was another tough place to leave!


We couldn't leave the area without sneaking up a small channel into Guatemala. 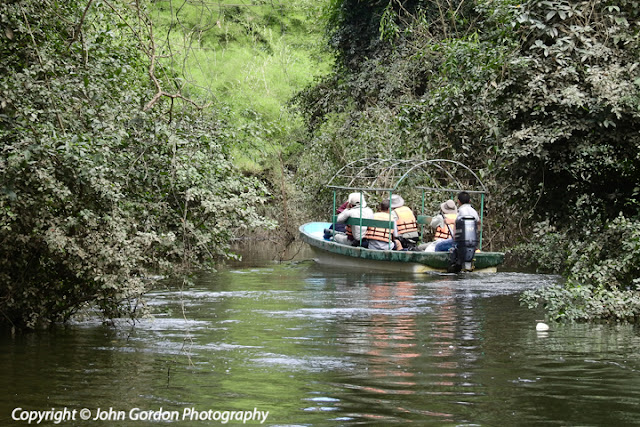 Our cunning plan was somewhat restricted by an enormous fallen tree, but we still tallied around 20 species on this Guatemala side-trip, our two lanchas crawling along carefully. 60 Black-bellied Whistling Duck went over, and flew into Mexico. Along the channel edge we watched 2 Louisiana Waterthrush. Others which made the Guatemala list included White-eyed Vireo, Squirrel Cuckoo, and Green Kingfisher. The real highlight was extended views of an exquisite pair of American Pygmy Kingfisher!


We had to laugh when a Yellow-breasted Chat worked its way down a vine behind one of the kingfishers! How cool is that!? Things got even better with 2 Rufous-breasted Spinetail. I made a joke about encountering the Guatemala Border Patrol, and Eric replied, "You know, you're right. I never really thought about it like that!".
What a time we had along the Usumacinta, blasting along in our lanchas, the wind in our faces, birding dreams becoming reality, and a definite sense of high adventure about the whole thing.

"It's never too late to go s birding adventure"
John Gordon
Langley/Cloverdale
BC Canada
Posted by John Gordon at 22:50