Back from Newfoundland on the overnight ferry and straight to Bird Island Boat Tours. The tour was led by Captain Vince Van Shaick. 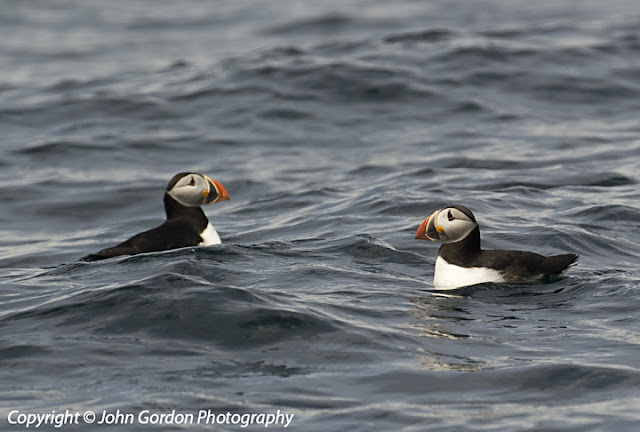 I had photographed Atlantic Puffins in the UK but never in Canada and so the Bird Island trip for that and to hopefully tick off a Great Cormorant. The guided tour is good value and costs just $45. The skipper gives a running commentary all the way out explaining the lifecycle and habits of all the creatures on view. Did you know that seal eats 40 kilos of fish a day! He explained how the Black-legged Kittiwakes are beginning to use the island in greater numbers than ever before.
Bird Island Boat Tours
Did you know the Great black-backed Gull is the largest Atlantic gull with a wingspan of 54" or 137cm.

*****
Just another gull to everyone else on board but when I explained that I rarely see them Vancouver they were still unimpressed! I wonder what they would think if I told them birders hangout at garbage dumps and sewage., Hmmm!


I think the rocks have a painterly quality, probably because it was taken on the lee side of the island in the shade.

Finally, the Great Cormorant was one of my target birds which I had missed in the other three Maritime provinces.

Below is a 15 year old study that gives some interesting insights into the island, the birds and human interaction.
http://www.ibacanada.ca/conservationplans/nsbirdislands.pdf

I have yet to photograph a Razorbill with catchlights in the eye but i'll keep trying until I succeed.


The seals may look cute but to the fisherman they are competitors. What I find very worrying is the amount of lobster pots, ropes and other fishing paraphernalia strewn over almost every estuary, bay and even open sea. I hardly saw any open water free of fishing gear. The lobster pots go out tens of kilometres. During one crossing I took, the ferry was halted for ten minutes after tangling with ropes and pots. I just wonder how the whales, porpoises and sea turtles manage to make their way to the feeding grounds.

The Cabot Trail
There is so much history in the region starting with the Mi'kmaq First Native culture to the numerous villages and towns many named after Scottish or French settlers. Some villages are French speaking only, others English. There is so much to see and so little time. I decided to view the scenery and take a rest after a few long days driving.
The commonest bird I came across on Cape Breton was the Willet, almost every bay or riverbank had one. There were very few duck, mostly Mallards here and there. The lack of raptors surprised me, I saw the grand total of two American Kestrel, one Red-tailed Hawk and a Merlin. The Common Raven seemed was the main predator on most telephone poles and there were lots of them, Ravens that is! By now most of the songbirds were hiding way, protecting their nests and very hard to see. The odd male could be seen collecting food but in a few weeks the woodland fields should be alive with fledglings.

Parts of the Cabot Trail reminds me of Scotland and Wales. No wonder the first settlers thought they could begin new lives there. What they hadn't planned for were the long winters, many perished. However many persevered and the rest is history.
Here is some of the signage found around the trail. I hope it gives you an idea about the wildlife, none of which I witnessed first hand. My chief aim was to find and photograph Bicknel's Thrush, alas I couldn't find any, a long shot but worth the try and one of the few places the bird nests on the East Coast.
There were however a few American Redstarts, Yellow and Black and White Warblers. Black-capped Chickadees along the trails. Over open fields Northern Harriers hunted. Mosquitos were ever present, no mention of them in the tourist guide! 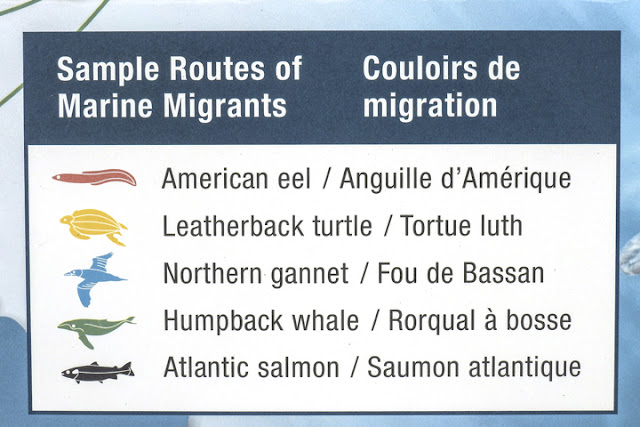 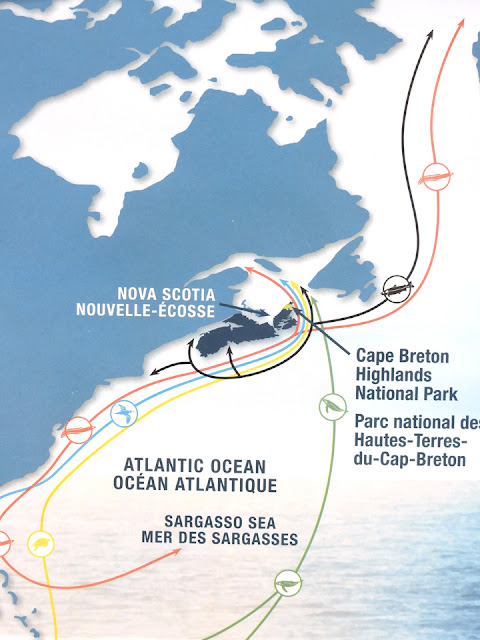 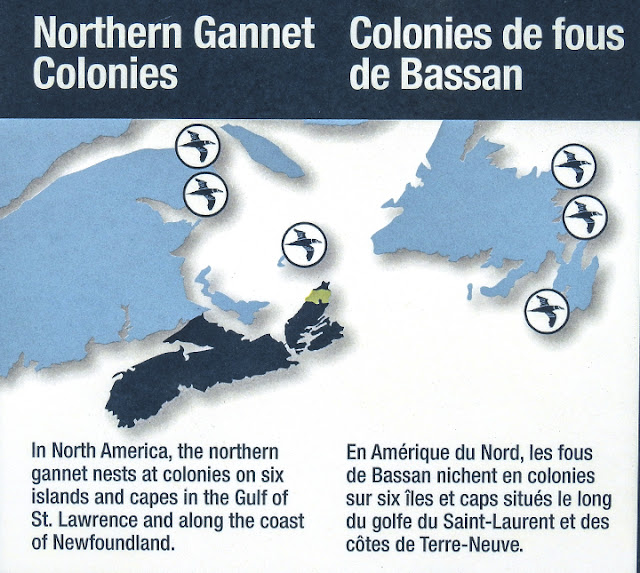 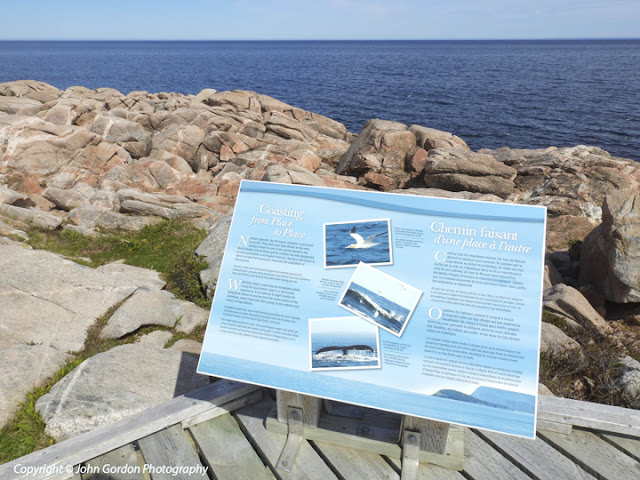 There are plenty of places to stop and enjoy the view and learn about the natural history. 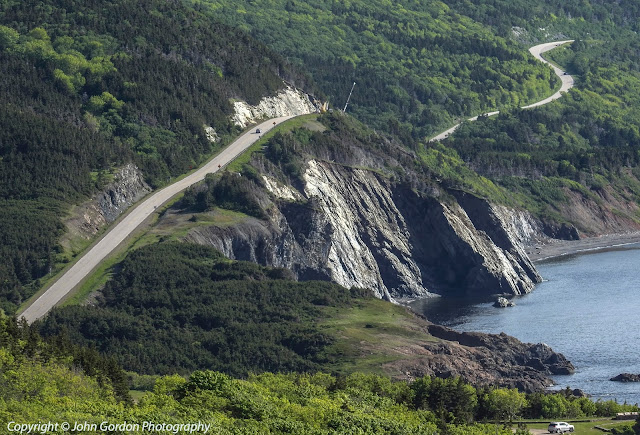 The Cabot Trail goes through Cape Breton Highlands National Park of Canada. The trail is 185 miles in length and can be driven in a day but two or more days would give the visitor a better feel for the area. I found a superb beach campsite at Presqu'ile where I spent a pleasant even enjoying the sea breeze and watching a spectacular sunset. 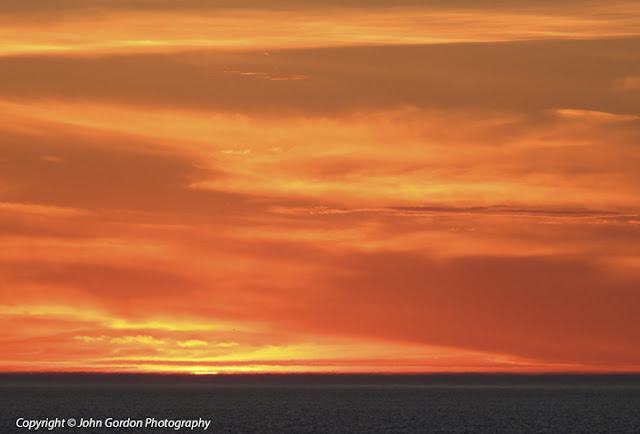 Not too much birding more sightseeing and enjoying some special time relaxing after the Newfoundland trek.