As promised Charlie took Ray and I out into Netley/Labau Marsh. Before I go any further I have to say that whatever I write is gleaned from listening to Charlie's passionate and eloquent account of how what was once a thriving and spectacular Eco-system in Netley/Labau Marsh and has now become in his words a "devastation zone"
As mentioned in a previous blog Lake Winnipeg and the surrounding basin is a sink for a million sq. kilometres of river systems including the watersheds of North Dakota, Minnesota and 30% of all Alberta and Saskatchewan River systems. Here is a diagram from the Canadian side of things.

To harness water for various purposes including Hydro keeps Lake Winnipeg in a state of perpetual state of flood. This leads to artificial water levels and therein lies the problem for Netley/Labau and other marshes around the lake.
Prior to Manitoba Hydro controlling water level in Lake Winnipeg there would be low and high water periods, which in the natural scheme of things would have left sandbanks, reed beds and other features exposed or flooded depending on the seasons. 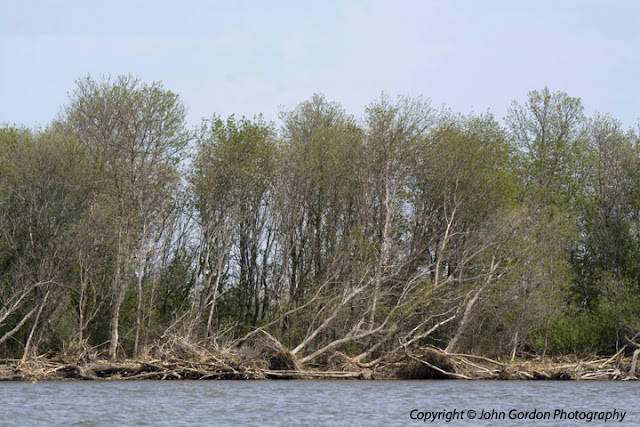 Trees have died off and their roots have become waterlogged.

These areas as we will see from the photos from the trip are now under several feet of water all the time. The surrounding water table is higher than it has ever been. People have had to abandon their summer cottages and many species of trees have had their root systems decay. Animals like the beaver have been displaced and the lack of birdlife on the marsh is quite remarkable.

Charlie, who with other stewards are lobbying several levels of government officials to come up with a plan to mitigate the flooding of the Marsh and hundreds of similar sites around the lake.
What does all this mean to the birds?

The breeding populations of barn swallows has dropped from 10,000 to 300 pairs, Cliff and Bank Swallows have left the marsh completely and because there has been no drawdown of water the population of dabbling and other ducks has plummeted to less than a thousand birds, a decrease of 80% in some species. Some species of shore birds because of the perpetual high water levels have  been displaced.

The eagle nest in this picture is in a dead tree that was once part of a thriving forest. Bald Eagles are one species that may that has benefited from the flooding. See Charlie's stats in his post below.


Netley/Labau Marsh is Important bird Area (IBA) but unless a solution is worked out with the Federal, Provincial and Manitoba Hydro, the marsh will decline further. The Netley/Labua Marsh IBA is on the vital and important flyway funnelling birds up from Central America, along the Mississippi River flyway convergence and the Southern United States.
The fall out we witnessed the day before was on the north-west tip of the marsh. Prior to the flooding hundreds of thousands of geese and ducks would have landed in the area to eat and feed, today they can rest but there is no where for them to feed.
I will post a link with Charlie's permission to the extensive background research he and other stewards have compiled. Charlie wants to publish his finding along with photographs and if there was ever a good cause for crowd funding this is one.
Here are  a few more pictures from our few hours out on the water.


Anyway the day out was memorable experience, the pea soup Ray cooked up on the bank was delicious, the sight of a two Black Tern nesting colonies was heartening to see but as we snaked our way out of the marsh battling the Red River, the picture about how the marsh once looked like kept spinning around in my thoughts. Where were the thousands of birds that would have once found shelter and food gone?
Of course we did see eagles, terns, grebes, pelicans but only two pairs of Mallard!

Charlie asked me what was the highlight of the morning. I had to think about that. Was it the small flock of Spotted Sandpipers on the riverbank or the Black Tern hawking insects or perhaps the flock of two hundred American Pelicans lounging around on the shoreline? In the end I had to say it was all that and the understanding that we humans often change things before seeing the whole picture, that it is until it's too late.

Hopefully Charlie and the friends of the lake can hammer out some resolutions out that meets everyone's satisfaction, the birds included!


"It's never too late to start birding"

John Gordon
Langley/Cloverdale
BC Canada
Posted by John Gordon at 08:06