I hadn't even thought about going birding but the sun kept poking through the clouds so I quickly loaded the car and off I went to Boundary Bay. It began to rain as I drove through Surrey but when I arrived at the coast it was sunny and warm. I had no plans to target a particular species but I did need some exercise before the next big storm rolls in and soaks everything. The weather lady calls for three days of rain and wind.
Am I glad I got off my backside, I had only been on the dyke a few minutes when I spotted what I thought was a Short-eared owl but as the distant speck approached it became clear it was a Barn owl. They are not often seen during the day, the Bald eagles tend give them a hard time and they are normally nocturnal hunters. I managed about 7 shots with six in focus and 2 with good expressions before the bird was out of range. 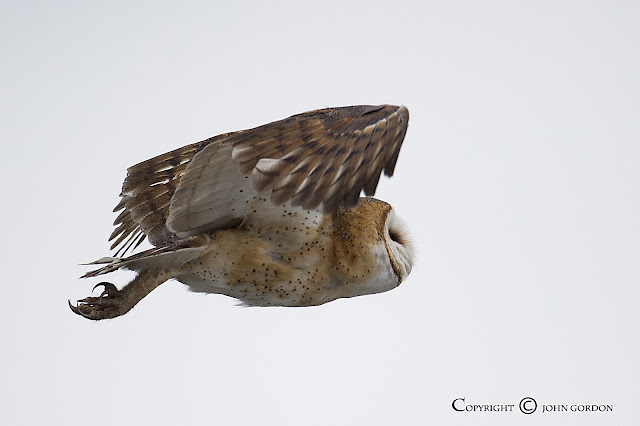 The underside is adorned with small black spots

On my way back to the car I met a birding "duo" from Prince George who pointed out a Lincoln's sparrow to me. I had seen them in the Caribou but this was my first for the Lower Mainland.
I'm glad I didn't say home, the Newcastle v Stoke game which I had on the PVR can wait for a rainy day.