*I have been so busy lately I never got round to posting these images and video.

In December 2018 a severe winter storm cut White Rock pier in two. Almost nine months later it re-opened to much fanfare. The long anticipated opening was greeted with much anticipation by the public but especially birders. Finally we could "get out to sea"
The timing could not have been better as it coincided with perhaps the largest congregation of Northern Anchovy ever witnessed in Boundary Bay. As of February 3 the anchovies were still hanging around the pier. An important food source, anchovies have been described as the 'Bounty of the Ocean'
Many species including salmon, Brown Pelicans and sea lions depend on them to maintain healthy populations. A recent die-off of Brown Pelicans and California Sea lions has been tied directly to the collapse in anchovy stocks.

The pier which re-opened just before Christmas was the perfect vantage point to watch the spectacle. California Sea Lions, Harbours Seals and countless species of birds put on a show. Many, even the locals had never witnessed anything like it. The event made the national news drawing even more visitors, a boon for the local restauranteurs who had hit hard times when the pier was shut down following the storm.

The wintering bird population have been taking full advantage of the situation. Normally the phenomena takes place out at sea and out of sight. Thousands of visitors have been drawn to experience perhaps a once in a lifetime spectacle. 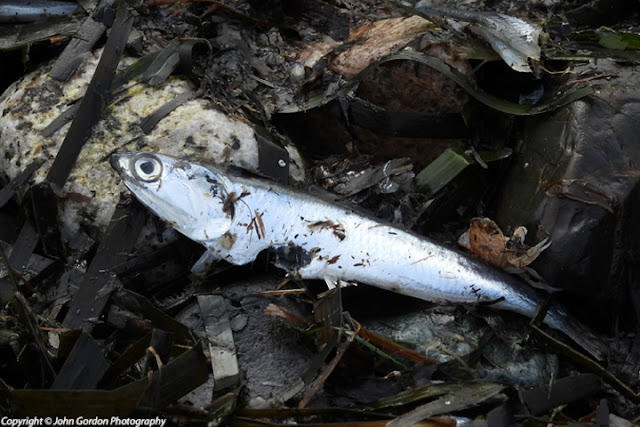 Some of the more savvy were seen hauling away bags of the nutritious little fish for dinner. The anchovy is similar and related to the sardine, albeit the meat is darker.

"It's never NOW too late to see the anchovies
but who knows, they might return"