Every Picture has a (little) Story


When Spring Break came around my wife and I decided to head for California, Joshua Tree National Park and warmer climes. It was to be an adventure, no schedule and hopefully time to see some birds.

The drive down took three days. To alleviate the tedium of driving we decided to keep an I5 seen while driving list (40 species) while listening to U2's Joshua Tree.

After the long journey down we hadn't bargained on the entire park being booked. A few kms from Joshua we found the next best thing, a meditation retreat with a rustic campground, hot showers and birds.
There were Joshua Trees everywhere as well as numerous other prickly looking plants. Exhausted from the drive it wasn't until next morning that I realized we were the only campers on 400 acre retreat.

I was woken up early by the dawn chorus. Nearby a pair of Cactus Wren had built a nest in an area set aside for meditation. They must have known it was a quiet little corner, clever birds!


The male was singing away posing for photos when the female came out of a nearby bush. I'm sure they had a nest in the shrubbery so I left them to follow a flock of Lesser Goldfinch that had just flown overhead. 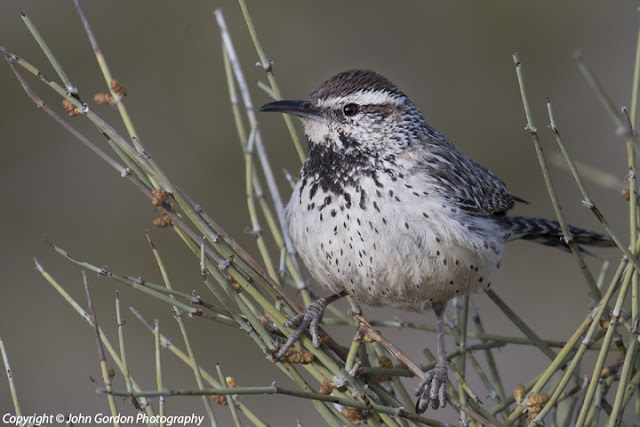 The goldfinches were harder to approach leading me a merry path arounds the retreat. The grounds contained religious iconography of every kind, I recognized a few from my practice, most however held no meaning, each to their own I suppose. The buildings themselves were built by American architect Frank Lloyd-Wright, an altogether interesting place to camp and bird.

One of my target birds was the Greater Runner, the protagonist of many a Saturday morning cartoon.
I didn't have to wait long when out of the corner of my eye I spotted not one but two.
Joshua Tree National Park wasn't that birdy but what it lacked in birds it made up for with jaw dropping scenery. The first drive through took us all afternoon and evening. The next day we spent the whole day stopping in wonderment. Joshua Tree is 1000 metres above sea level and is surrounded by the Mojave and Colorado Deserts. To the south is the Salton Sea which we would visit later. 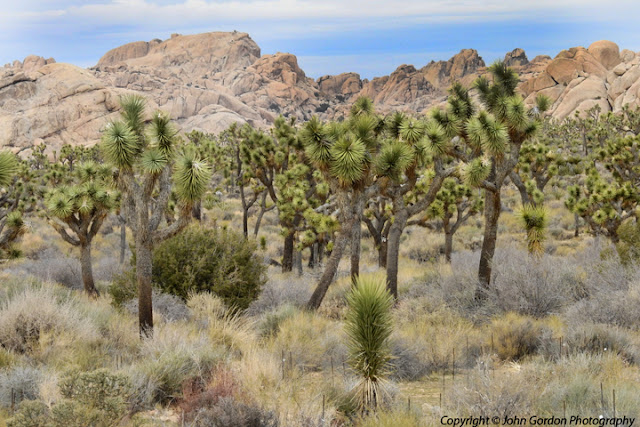 The first bird I heard was this Black-throated Sparrow, I finally tracked it down few hundred metres from the car. I had only seen one before and that was a vagrant at Grant Narrows in Pitt Meadows. At least this time I could include it perched on a cactus.

One of the most common birds at Joshua Tree was the Sage Thrasher. I really like the bokeh or background in this image. 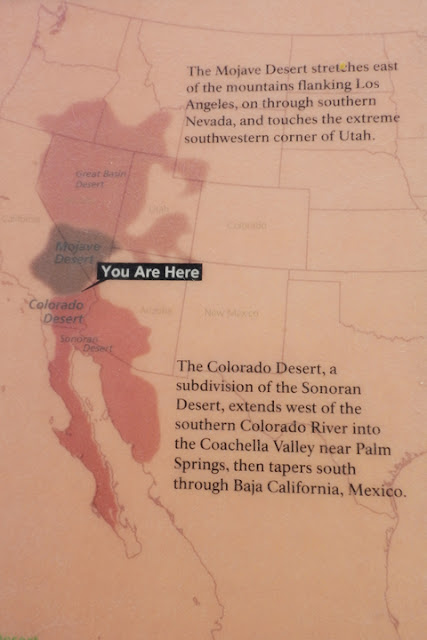 I found this hummer feeding in the garden but i'm not too sure which species it is.

Before I left for California I asked BirderGirl Mel to give me some suggestions about where to bird and one was Big Morongo. I wish I could have birded in the cool of the morning but when traveling it's not always possible.

I met Surrey birder Gareth Pugh at Big Morongo. The women left us to bird and took off shopping. We walked the lush canyon trails. A creek fed by a perennial spring is a great attractant for wildlife in an otherwise arid landscape. Hundreds of species of birds have been recored at the reserve. A casual walk in the heat of the day turned up a number of good species and a few lifers including a Verdin.

This towhee below was a difficult capture, it's a skulker, a species that darts into the undergrowth at the first sense of danger. Most of my shots were obscured by branches and twigs but finally it popped out for a portrait, another Lifer.

Now and then a little luck plays a part in any birding finding trip. Big Morongo has a couple of feeder stations and at one I was lucky enough to get two frames of an Oak Titmouse, another lifer and one of the target birds Mel had told me about. I waited and waited for another shot but it never returned.

Next up was a real tongue twister, I proved incredibly difficult to pronounce and to even more  difficult to photograph. The male Phainopepla proved impossible although they were commonplace. I settled for the female below.

At the feeder was a Hooded Oriole, a species I had only seen in Mexico and now one I can add to my ABA list.

Next stop was a campground at the north portion of the Salton Sea. My wife had imagined swimming,  sandy beaches and cocktails, she wasn't that impressed especially the stench of dead Talapia that had been washing up after a recent algae bloom. The lake is shrinking every year and the amount of fertilizers washing into the lake is changing the ecosystem.
There first bird I heard was a Northern Mocking bird then a Bullock's Oriole and then a small wave of Yellow-rumped Warblers. A pair of American Kestrels and a Barred Owl were in the campground palm trees. Say's Phoebe were everywhere.

Driving down the east side of the Salton Sea we stopped off at Imperial Wildlife Area. It seems the roadbeds and channels are set up for hunting more that birding but in the parking lot were a mixed flock of warblers and among them was this Black-tailed Gnatcatcher.

Also presentt were White-faced Ibis and a large flock of American White Pelicans.

We arrived at Sonny Bono late afternoon and storm clouds made for some interesting light and I think that is why the colours on this Ground Cove looks so vibrant.

Another target bird was Gambal's Quail. I came across one flock but couldn't get near them, they seemed so skittish but at Sonny Bono hunting is banned and I eventually found a flock that had more trust in humans. I took me fifteen minutes but eventually I managed to get off a few shots before it was time to look for a campground for the night.

The whole area around the Salton Sea is farmed intensely and Cattle Egrets find plenty of pockets of water in which to hunt.
Flocks of Black-necked Stilt could be found almost anywhere on the sea feeding alongside ducks, geese and gulls.

The trip was a great introduction to California and for a boy from the Newport Wales, the scenery, the flora and fauna was simply stunning, i'll be returning for sure.