West-coast birders are so fortunate to live and bird around the Vancouver area.
The mountains, the rivers, the farmland, forests and of course the ocean are all magnets for wintering birds.  We are really blessed with phenomenal birding year round, winter birding unparalleled in Canada.

I have been making the most of my time, getting out and around, sometimes with camera, sometimes with just a scope and bins. One Wednesday an arctic outflow enveloped the Fraser Valley resulting in cobalt blue skies and mountaintops dusted in fresh snow. It also meant the falcons were back in Pitt Meadows staking out their winter territory and terrorizing wintering flocks of ducks.

After several hours of searching I was lucky enough to find this Prairie Falcon flying across its territory on Sharp and Old Dewdney Trunk Rd in Pitt Meadows. 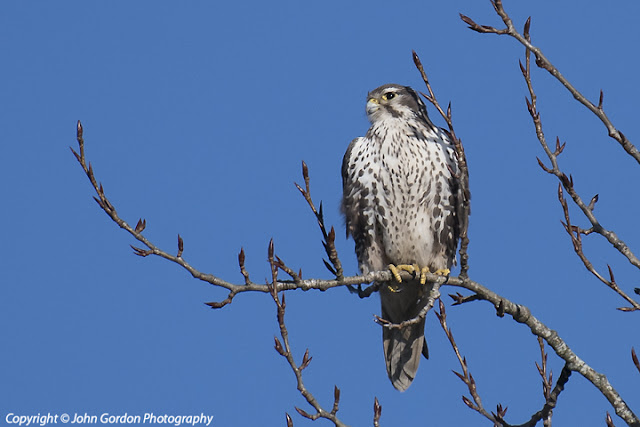 Eventually I had a four falcon morning with a Gyrfalcon, Peregrine Falcon, American Kestrel and Prairie Falcon, my only miss was the Merlin.

Boundary Bay still has few areas left where owls can hunt. The development of cranberry and blueberry farms has shrunk their traditional hunting grounds. The image looks like I've used stealth and expertise to make this photograph, however this owl has become so habituated to humans that it frequently hunts close to the dyke pathway putting on a show to all who are present. I had been drawn to the spot by accident when coming back from fruitless search for American Tree Sparrows. The bird is a regular visitor to the same fence line where it catches numerous Townsend's vole, stashing its catch for later consumption. I'll never take an easier shot.
It was a foggy day on the bay and I intended looking for the Willet. I had no idea that the the fog was so thick. Looking for a single Willet amongst two thousand Dunlin and Black-bellied Plover would have been a fruitless endeavour. Rather than return home I began looking along the dyke hedgerows, within seconds my eye was draw to a bright object, it turned out to be a long-eared owl sitting out in the open, not a branch in the way and with its eyes wide open. I took five shots, two vertical and three horizontal and left.

Since I took this picture a few weeks ago the word has got out and many photographers, have descended on the location. Many are not even birders, while drawn by the owls presence they may not understand or simply ignore that their behavoir, the waving of hands, stomping of feet, approaching too closely or the tossing of sticks to may endanger birds well being. When I intervened I was met will a volley of abuse, sadly there was no conservation officer around. It was time to leave.
Below is a guide to ethical birding.

Another species I was hoping to add to my Metro Vancouver year list was a Pine Grosbeak. This bird was part of a flock of five that have been visiting Burnaby Mountain since early December. Eventually and on my third visit and a three hour wait my patience was finally rewarded. The birds were feeding on cherry buds, a piece of which can be seen falling from the bird's bill.

Another elusive species is the White-winged Crossbill. A really difficult bird to find. When a flock were seen and photographed at Reifel Migratory Bird Sanctuary I went next day. I was never really close enough for a quality image and the flock were always against an ugly grey sky, the best I could do was the shot below.

What better way to round out 2017 than with a rarity. On December 23 a Blue Jay was found in Richmond during the annual Christmas Bird Count. A Metro Vancouver rarity, the species has been seen only dozen times in as many years. It was a welcome addition to many birders Metro Vancouver  list. 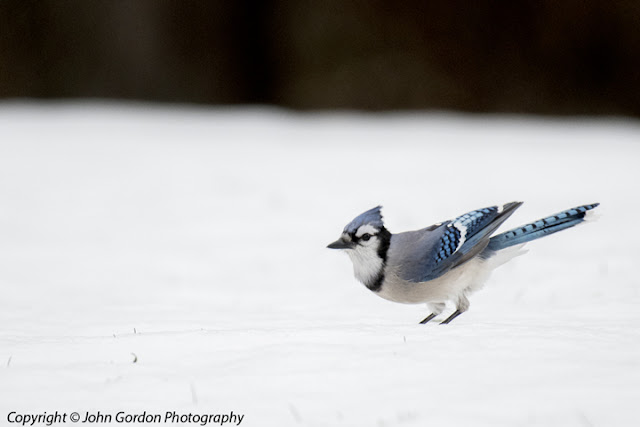 As the year closes I like to wish everyone a happy, healthy and birdy 2018. Hopefully we'll see each other in the field

"It's never to late to start birding"
John Gordon
Langley/Cloverdale
BC Canada
Posted by John Gordon at 19:14