Every once in a while a really good bird takes a wrong turn and lands close to home. Such was the case this week when Langley birder Cos van Wermeskerken found a Yellow-breasted Chat behind his home in Langley. He's one of the lucky ones whose property backs on to a municipal park. The Yellow-breasted chat is a very rare occurrence in the Lower Mainland and endangered in Canada where their numbers can be counted not in the thousands but in the hundreds. Their preferred wetland habitat has now been severely depleted. Normally the best place to see them in BC is the Okanagan Valley, especially Road 22 where some wetland habitat remains relatively untouched.

When Carlo and I arrived at Bell Park we were greeted by the raucous call of the chat. We still hadn't seen it by the time we hooked up with Mike K and Raymond. They had already seen the bird high up in the trees and for fifteen minutes it continued to give us only slightest of glimpses.

Eventually we were joined by Quentin, Floyd, Peter and Brett. Floyd was the first to spot the bird which had now come down to eye level, we couldn't believe our luck, not only did the bird choose a number of photogenic backgrounds it sang as well. We all the chance of some great stills and some amazing video. 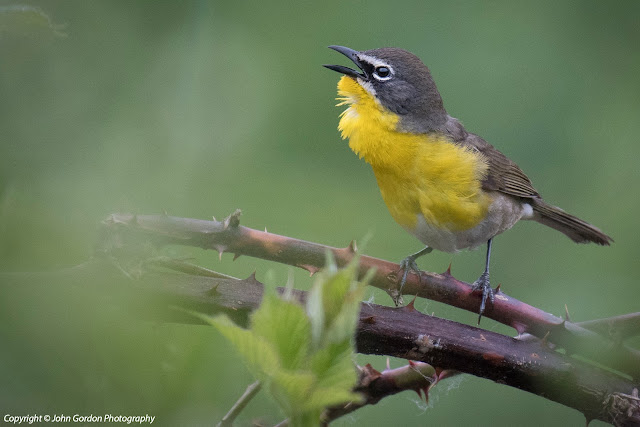 We couldn't believe our luck, as we left we all had the widest smiles. We left the bird to forage in peace. No doubt there will be a steady procession of birders arriving soon.