This is the first of an ongoing series of Lower Mainland birding hotspots. Locations where the birding novice or the more advanced birder can visit with a fair chance of easily seeing twenty or more species of birds in just a few hours.

When I began birding with a purpose I had no idea where to go so I hope this series will help those who are just beginning to bird navigate the many great birding spots available to us here in the Lower Mainland.

After one of my presentations a member of the audience asked me what was the catalyst that sent me on the life changing pursuit of birds? Looking back it was a conversation I had with renowned naturalist Al Grass. In 2011 Al gifted me a book on Birds of Western Canada. I went home flipped through the pages and became completely hooked on the hobby which at last count is the fastest growing pastime in North America.

The Serpentine Fen is a ten minute drive from home, it's one of those places I visit often. I have been there all times of the day and probably most months of the year. You never know what to expect. This visit I had no preconceptions but found two year birds (#139 and #140) in the first ten minutes. 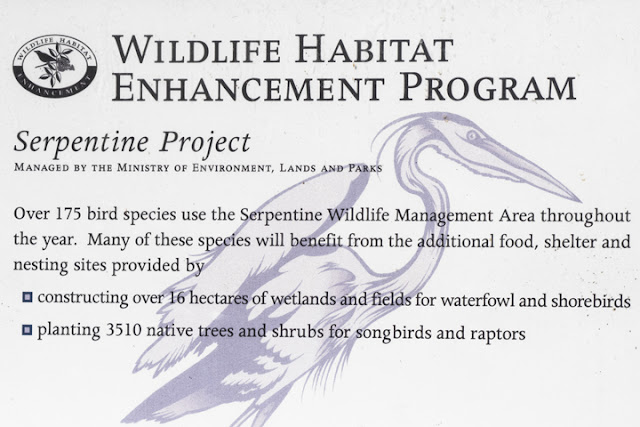 At this time of year migrating warblers are passing through, ducks are nesting and many species are returning to make the wetlands their home for the summer. Many species spend the whole year at the Serpentine. Marsh Wrens, Belted Kingfishers, Bald Eagles and Double-crested Cormorants to name a few.

The over-wintering birds have to deal with extreme temperatures as the area is open to the inclement weather sweeping over Boundary Bay. The ponds are often frozen solid and dry as a bone in the sumer. Purple Finches eke out a living from the fruit of Pacific Crab Apple trees while in the undergrowth White-crowned Sparrows and Dark-eyed Juncos feed on yarrow and blackberry seeds that have fallen to the ground.

When the weather warms in April and May migrants such as the Common Yellowthroat (below) flood into the area. On the day I visited I counted fifty of more Yellow-rumped Warblers feeding in the wild cherry blossom, Common Yellowthroats were everywhere and over fifty pairs of Northern Shovelers had outnumbered all the other duck species on the pond. One nice find was a pair of Cinnamon Teal.

Before I began to bird I had no idea there were so many beautiful birds in the British Columbia. I lived on Long Beach and spent ten years in Campbell River, I even had a feeder where the usual suspects would come to feed. One day a Yellow-headed Blackbird added some extra colour. Another day I captured a few photographs of a Red-Breasted Sapsucker drilling holes in an apple tree. Another time I spent a week on Mitlenatch Island where the birds and the scenery became indelibly  imprinted in my memory.
One of the bird I photographed on Mitlenatch was a mystery sandpiper. The slide sat in my collection for over twenty-five years until eventually I had enough skills to identify it myself. The bird was a Wandering Tatler.


Just as I was leaving the wetland area to look for warblers I caught sight of an orange shape in the reeds. I stopped in my tracks and sure enough it was a Virginia Rail out in the open. Usually they are skulking around the reed beds. This one was headed my way so I dropped my knees in the wet grass and waited and waited....and waited. Eventually it cut across the pathway headed for a water filled ditch.

If you have got this far I thank you for your time and patience.  I hope you enjoy this personal journey. I can't think of anything else I would rather be doing with my time!