I'm posting an email chain between Melissa Hafting and Sheri Williamson regarding the identity of the purported Black-chinned Hummingbird at Richmond Nature Park. Please see below.
Good Birding,
Ilya Povalyaev
South Surrey, BC 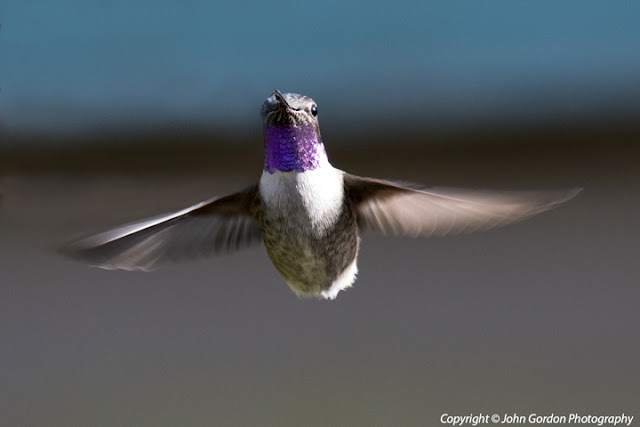 Hi All,
I got a response from Sheri Williamson. She is an expert on Hummingbirds and the author of "A Peterson Field Guide to Hummingbirds of North America." She has confirmed this bird is a male Anna's Hummingbird crossed with a Black-chinned Hummingbird. Kudos to Don Cecile for picking this up. I have cc'd Wayne Weber so he is aware for eBird.
See her response below. Feel free to post to vanbcbirds
Hi, Melissa,
Don Cecile also sent me some photos of this bird, which is definitely not a pure Black-chinned. The big-headed shape, dull, narrow chinstrap, and too-extensive violet are all indicative of hybrid origin.
Despite the violet gorget color and apparent lack of crown iridescence, two features particularly evident in Peter Candido's back view (which I hadn't seen previously) point strongly toward Anna's as the other parent: the long, deeply notched tail, inconsistent with Rufous, Calliope, Broad-tailed, or Costa's parentage; and shortish secondary coverts, an Anna's trait expressed intermediately in its hybrids. If perched side views can be obtained, I would expect them to show slight graduation of primary widths and faint notches on the inner vanes of P1-5, suggestive of Black-chinned, combined with a slight asymmetry to the outermost secondary coverts, an intermediate expression of another Anna's trait.
Hope this helps.
Good birding,
Sheri L. Williamson
Bisbee, Arizona

David Sibley author of the Sibley Guides has weighed in and also confirmed the RNP bird as a BCHU X ANHU. He explains the significance of this record below.

Along with the old California specimen, there are at least two more recent records from Arizona, and probably more that I'm not aware of. This BC bird would be the farthest north and one of only a few records, but with the recent expansion of Anna's Hummingbird more hybridization would be expected.
Best,
David
www.sibleyguides.com