Feb 9 2016 Various Locations. Sunny 12c
I decided to begin birding at the George C Reifel Migratory Bird Sanctuary then later in the day make my way home via Brunswick Point and Boundary Bay.
Driving along Ladner Trunk Road I passed about thirty Trumpeter Swans feeding in the furrows of the rain drenched fields. Root crops left over from the harvest sustain the swans throughout winter.  On a bush a juvenile Northern Shrike, head bent downwards scanned the hedgerow.
On Ladner Trunk Road between 112 St and 72 St I counted eight Red tailed Hawks while above me at one hundred or more Bald Eagles circled above in a mass kettle. During the recent Ladner Christmas Bird count an incredible 1360 Bald Eagles were recorded. Passing 72nd Ave a further 30 eagles perched in a row of trees. Beneath a busy BC Hydro crew were pruning branches, the eagles didn't give a hoot. So many birds and Reifel was still 5 miles or 8kms away!
Eventually I pulled into Reifel where a pair of Pied-billed Grebes were mirrored on the calm water of the slough.

Reifel 10.30 A.M
Unfortunately there have been some questionable practices taking places both at Reifel and at other locations. Monday was BC Family Day, a record number of people visited Reifel. It seems not everyone was happy just to see the owls in their natural habitat. Staff told me some (idiot) thought it necessary to "trim" a few twigs so as to get a better shot of the above Saw-whet. The day I visited someone with a point and shoot (neither a birder or photographer) tried to get a better shot by making loud noises crunching a water bottle, hoping the owl might open its eyes. I had to ask him to move on. At another well known location where Barn Owls roost someone had also been doing some "creative pruning" so as to get a better view. No wonder ethical birders and photographers are reluctant to post their owl sightings. It's a shame really. Anyway, human nature being what it is sometimes our egos get the better of us and we forget that the birds live by instinct and instinct alone and that we humans can easily destroy what we love in the mad rush for acceptance via blogs, Flickr etc.
Recently I have thought about selling my camera gear and just watch birds but I have photographed most of my adult life and would like to think I can police myself.

Who can resist photographing the exotic Wood Duck?  This one was plying a quiet backwater.

At Brunswick Point there are signs that something is about to change and not for the better. This sparrow was photographed on a small patch of blackberries, most of which have been bulldozed. Many who visit the area wonder how long before some form of development takes place and yet another birding spot is lost forever.
Close to the car park a flock of American Pipits bathed in a distant puddle and overhead five nervous Western Meadowlark fly toward the dyke.

This meadowlark was about 30 metres away, a small speck in the frame but nevertheless captured in flight

When this European Starling landed in a nearby tree I was taken by its iridescent plumage.

****
It was warm enough to eat my packed lunch outdoors. Later I made my way past the coal port through what used to be good arable farmland. Often rough-legged and Red-tailed Hawks were seen hunting. Now only tonnes and tonnes of gravel, heavy duty machinery and a gas station have taken its place. A barn and two snags gone and the birds too, in their place plastic bags, disgarded coffee cups and who knows what else! Development has robbed the birds of what was a bountiful feeding area. Now there are plans to build a second terminal the size of Stanley Park in the middle of Roberts Bank.


I am including a letter written by noted naturalist Anne Murray. It contains information and contact details on how to made your views know to your MLA and MP. Please take moment to read it.

Here is where letters on how birdwatchers value the Fraser Delta environment could go in the short term:
Any federal politician can be contacted by email using the standard format: e.g. justin.trudeau@parl.gc.ca
With the new government in place it is an opportune time to let your local MP, Mr Trudeau, opposition leaders and Marc Garneau, Federal Minister of Transportation, hear your views on the importance of the Fraser River estuary and delta (Roberts Bank, Boundary Bay, Sturgeon Banks, the Fraser River and the surrounding farmland) to migratory, wintering and resident birds. It is the top-rated Important Bird Area in Canada and a critical stopover on the Pacific Flyway.
You can also let Premier Christy Clark premier@ gov.bc.ca, Todd Stone Minister of Transportation, Todd.Sone.MLA@leg.bc.ca and your local MLA (same basic format) know your opinions. Send photos, help them understand how special this area is!
If you want to give input on PMV's Terminal 2 to the Canadian Environmental Assessment (ceaa-acee.gc.ca - search by project) currently in process, there will be opportunities for public comment in due course. Sign up at porttalk.ca to receive email updates of all Port Metro Vancouver comment opportunities, open houses etc.
Hope this information helps. Feel free to contact me off this site.
Anne Murray
Delta


Brant feed on eelgrass that grows in and around the present coal port. The birds wait until low tide when the grass beds are exposed. Low tide provides herons with fish and crabs caught in tide pools while diving ducks find easy pickings among the shellfish beds.


Before heading toward 72nd I dropped in at the dog park. Dodging muddy dogs and their crap I came across a flock predominately male house finches. They were busily eating buds from an apple tree. I was drawn to the bird's plumage set against the sky. 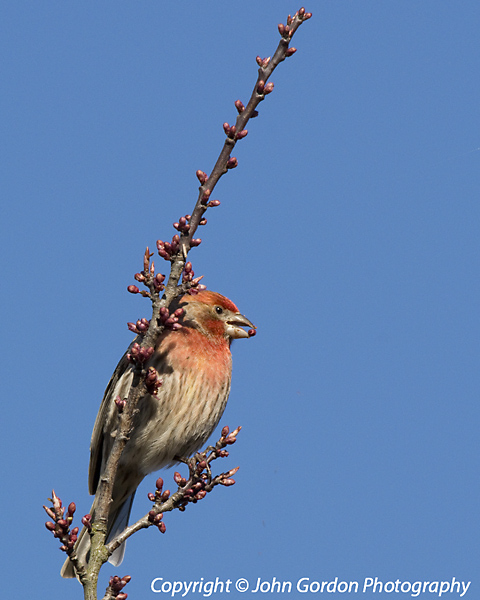 Before leaving the park I spent a few minutes photographing Bald Eagles. The opportunities to get a flight shot are ever present as the birds squabble over perches or try to find a mate. The park is home to some larger trees and is close to the dump, a waste re-cycling depot and the ocean. The perfect habitat for the burgeoning population of bald eagles.

I hope you got this far with my ramblings, bearing in mind I bird for my own enjoyment and blogging just helps to keep my brain ticking over between football games and grandchildren. Until the next time, good birding and don't forget to be kind to owls.