July 2-8 2015 Chaplin Lake Saskatchewan. Smoke no sun due to forest fires.
The skies from Manitoba all the way to just outside Calgary were thick with smoke. Forest fires in the NWT, Alberta and Saskatchewan had been burning for weeks.
After spending Canada Day in Regina Beach I made my way west to Chaplin Lake. Chaplin is situated on the Trans-Canada Highway between Moose Jaw and Swift Current. The lake encompasses nearly 20 square miles (52 km2) and is the second largest saline water body in Canada. The area is noted from the Western Hemisphere Shorebird Reserve Network (WHSRN) for its shorebirds. I had visited it on my outward journey. It is one of my favourite prairie birding locations. 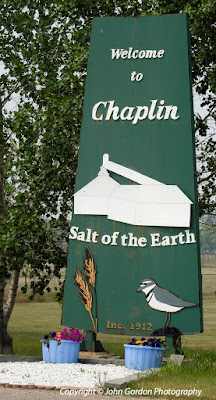 The grand plan was to check on the Piping Plover to see if they had had fledged chicks. First though I came across a number of American Avocet with young in various stages of development.


I think these are Gadwall as they were the most common dabblers on the lake.


Next up I noticed a disturbance to my left. An American Avocet took offence when a Marbled Godwit got a little too close to its nest.


I couldn't quite get both birds in focus as the skies were grey and dark even in mid-afternoon due to the thick smoke. Occasionally the sun would peek through though most of the pictures are somewhat muted but no complaints.


Next up and the main purpose of the afternoon was to check on the Piping Plovers chicks. It wasn't long before we found two pairs. One bird had two chicks the other four young. They were so small they could have fit in a teacup.

These pictures were taken deep with the working area of the lake. Several times a day and for a small fee the interpretation centre runs a short guided tour. Due to the lack of rainfall we were able to get far out into lake via a raised dyke road. The lakes moon like appearance makes it a landscape photographers heaven with all the colours and shapes. Had I had several more hours I would have dragged out my wide-angle lens. Sadly the area is closed to the public except for the half hour tours which end at 3 p.m when the light is too harsh and sun too high in the sky.

As is required by regulations we stayed in the vehicle and left the birds soon after taking this series of shots. There are 200 pairs breeding in the area and as many as 700 birds have been noted on the lake at peak migration time.
Spring and Fall would be the best time to visit to observe mass migration of shorebirds and ducks. The surrounding area is also very good for Swainson's Hawks, Black-crowned Night Herons, Upland Sandpipers, Sprague's Pipit and numerous other species of grassland birds. However beware of ticks in the springtime and wear light coloured clothing so they can be picked off after the photo session.

I wasn't expecting to see the Longspur at the salt lake and the day before my guide saw a Wolverine so anything is possible.

Finally but not least I include a post from Trevor Herritt on the mad plan to install wind turbines at Chaplin Lake. When you have read it check out some of his other blogs, they're informative and to the point. A must read for those from the prairies and anyone interested in the welfare of the environment.


Some P900 shots from the Rockies

I hope you have enjoyed my account of the trip and since my returned many of you have said it was an interesting read and for that I am grateful as my command of the English language can be a bit dodgy at times. It was an eight week dream come true. If I was to try the same X country trip again and there is no reason why I wouldn't I would set aside three months instead of two. I would also leave earlier, perhaps the last week in April when there would be less leaves on the trees. Even then it was too late for much of the migration so perhaps mid-April but then one might run into snow storms or any kind of inclement weather. Two years ago I was forced off the Trans Canada at Chaplin Lake in a fierce snowstorm..it was Victoria Day, the May long weekend. My time in Newfoundland was way too short at seven days and rain in Quebec and New Brunswick curtailed a few boat trips but I feel content with what I achieved. On the return leg many birds were hiding away with young and the trees acted as camouflage and the bugs became unbearable.

In my next blog or two I will post some of my favourite sighting lifers and some stats.