On arriving at Reifel we were saddened to hear the Sandhill Crane had lost both eggs. Whether they had been predated or otherwise we couldn't confirm, only that the birds had abandoned their nest. Sanctuary manager Katherine mentioned they might have another attempt to lay depending how amorous they feel.
The goal was to find a pair of Swamp Sparrows which may to may not be breeding in the Reifel's reed beds. Normally the species heads into the interior to breed so it will be interesting to see what unfolds. I almost got a clear shot but there's always another day.
On the way out of the sanctuary the Harris Sparrow was hanging around with the Golden-crowned Sparrows.

It's looking a bit rough as it changes into adult plumage.
Richmond Nature Park
I just felt like going to photograph some hummingbirds. The nature park has both Rufous and Anna's Hummingbirds and numerous feeders.


Next up was the surprise arrival of a flock of Red Crossbill. They came in so quickly for a drink at a small pond that I ended up underexposing the few shots I did manage to fire off. The result grainy pix. 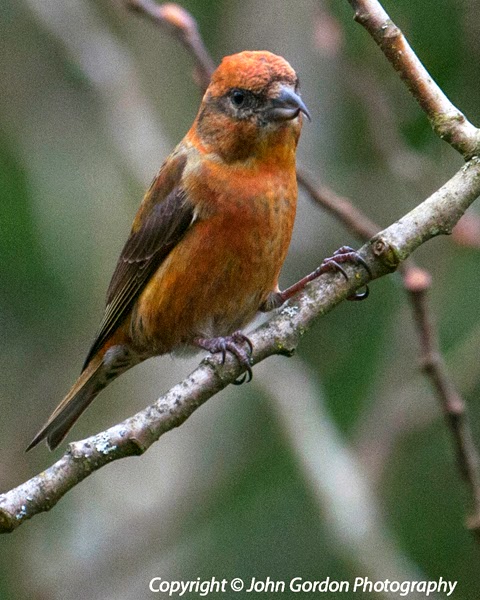 After all the excitement that lasted just a few minutes, it was back to the other birds where a number of species were sharing a feeder with a Douglas Squirrel.

I photographed this Great Blue Heron while waiting for the Golden Eagle. If I remember right I shot it handheld with the 500mm F4 because I had just arrived and hadn't put up my tripod.

Below is a Bald Eagle shot from the same spot but this time on a tripod. I have dozens of Bald Eagle shots but this one has a little more expression in the bird's face than most.


About a month ago Boundary Bay was inundated with Bald Eagles. From one spot alone a group of us counted 180 birds wheeling around in the thermals. As the weather warms the eagles slowly disperse and us birders turn our attentions to warblers, terns and shorebirds. Some of us will head to the Interior for desert and alpine species and others for the prairies to bird for grassland species.  Wherever your birding takes you I wish you the best of luck and good birding.