It was not the most promising kinds of days, typical west coast, just miles and miles of billowing grey and white clouds looming over the landscape and the promise of rain in the air. Looking toward Crescent Beach, a thin yellow band of pale yellow sunlight was the only colour in the sky. Maybe there would be a spectacular sunset at the the end of the day.


Meanwhile it was so windy on Boundary Bay that our avian friends had all hunkered out of sight or as they say "flew the coop" Nada! Nought! Nothing! The birds will be sheltering so plan B went into motion.

The original plan (now Plan B) was to see if I could find the elusive but very photogenic Northern saw-whet owl. One had been seen at Reifel so as the rain began to fall I made my way along the North Dyke.
I had tried to photograph a Saw-whet twenty five years earlier in Campbell River. I was in an orchard at Hudson's Farm when the Saw-whet landed within feet of me. I was just too close, I just couldn't move without spooking the bird. The resulting shots (2) were OK and were shot Kodachrome 64 on a 135mm Pentak Takumar portrait lens, but really it was really a missed opportunity. Twenty five years later I had my second chance. These shots below were shot in dense shade and were taken at a ridiculous 2000 ISO. How times have changed!
I'm glad I made the effort as this self-assignment proves. I hope you agree.


I wish you all a very Merry Christmas and a Happy, Prosperous and Peaceful 2012

The owl is about 8 inches tall but when resting often looks a lot smaller
In the above picture the bird had just coughed out a pellet, so quickly that the motor drive on the camera failed to pick it up.
The owl was in an awkward place but only four or five feet from the ground. The get these pictures I had to lay on the ground and shot through a convenient hole in the undergrowth. 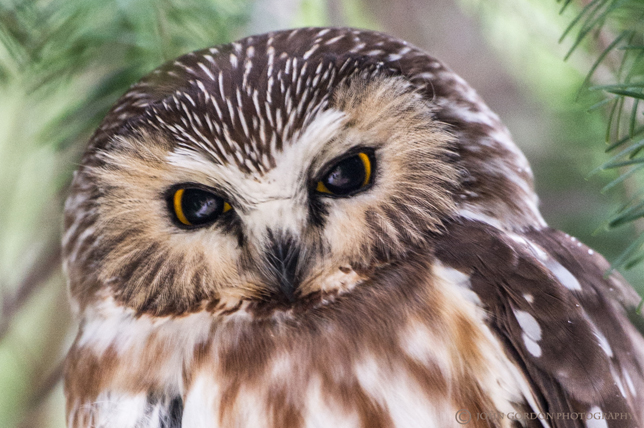