Some thoughts on Composition

The use of negative space is often overlooked in bird photography. The technique can be a very powerful storytelling tool, working in subtle ways to draw the viewer into the frame.
It’s not uncommon when photographing with long lenses to crowd the subject within the frame. What might be appropriate for submissions to a bird guide and magazines etc may not always the best way communicate one's vision.
Below is an example of a close-up used in a popular bird guide of Pacific Northwest birds.
***

Although a close-up image could be technically perfect, it may often lack context, not all situations call for close-up treatment. Many of my seasoned birding friends (some really well seasoned) tell me they prefer to see at least some background information that gives the subject matter a sense of place that include clues to habitat and other information. Photographs depicting some or all of those criteria can be one of the most difficult forms of bird photography. Most photographs posted on social media lack this important factor.
How about the image below. The Band-tailed Pigeons are clearly identified and so are ripening Red Elderberries the birds are feeding on. There's the story right there. A close-up may have worked too but it wouldn't have shown a flock feeding. Just as an aside, I also shot a close-up, a horizontal as well a vertical shot for a possible magazine cover.
Did the image hold your attention for more than three or four seconds, if so then consider the image successful.
If the photographer can transport the viewer albeit just for a brief moment, that's all the maker of the image can hope for, especially nowadays when thanks to social media and non-stop streaming services we are all on image overload.
***
***

Unlike the painter who begins with a blank canvas, the bird photographer often has to deal the opposite. Messy backgrounds, branches in front of the subject, awkward backgrounds and a host of other challenges. The photographer needs to bring order to the composition. Using negative space is one such technique.

Recently on a visit to Surrey’s Blackie Spit I was drawn to the strange colour to the water. At first I thought it was an algae bloom but on closer inspection it turned out to be a torrent of duckweed that had been released from farmers ditches following days of rain. A flock of thirty plus American Coots were feeding on the floating carpet of weeds. I had never seen so many coots in one place. I alsomade some close-up shots of Common Loons chowing down on crabs. None of those shots really worked out very well.
I then I noticed a Great Blue Heron hunting in the thick carpet of duckweed. I knew from experience that this is something I might never witness again. An opportunity not to be missed. I placed the heron using the Golden Ratio of the frame to act as a visual anchor. The difference in tones draws the eye creating tension with the frame, the heron then becomes the centre of interest. 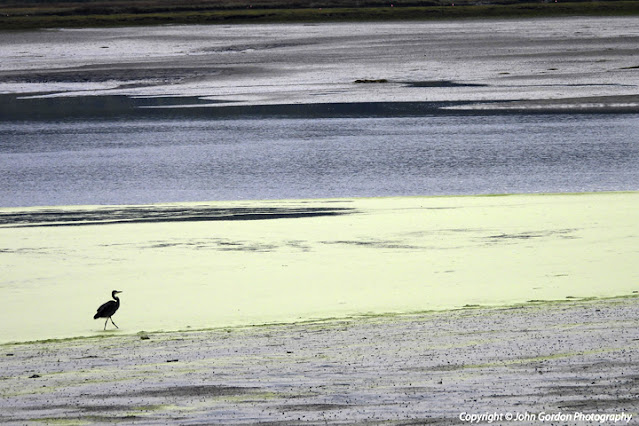 Using my 24mm-3000mm Nikon P1000 I had the option of many different compositions, something that shooting with a fixed prime 500mm or 600mm lens would have never be been possible. The 200mm-500mm on my D500 could have worked but it would still have been too restrictive compositionally. I could have zoomed in but I already have numerous images of herons flying or feeding and some great shots of their courtship rituals. I decided to use negative space to render my vision. The light was soft, the sun barely penetrating the clouds, the colours muted. I decided to meter off the bright mudflats and underexpose, causing the heron to be silhouetted. I made sure the bird was looking in to the frame from left to right, a ploy to entice the viewer to wander around the image and then back to the heron. The technique works so well because in Western culture we are accustomed to read from left to right, placing the heron in the bottom left encourages the viewer’s eye to naturally roam around the image as if reading a book.
"Its never too late to be composed"
John Gordon
Langley/Cloverdale
BC, Canada

Theres no need to memorize this, you can find the overlays everywhere on the Internet to download and paste over your images, as well as being built in (but very well hidden) in Lightroom.

To access this spiral, press R to get your cropping function open, then cycle through the available overlays with O until you find the spiral. Turning it around is done by pressing Shift + O. There are eight variations to it.