Bird on a Wire

On Monday Canadian music legend Leonard Cohen passed away aged 82. Like millions of others I've been listening to his music since the early seventies. I always found his words uplifting and often found myself singing or humming Bird on a Wire. Even though it was a sad day, I have no doubt his music will live on for a very long time. Meanwhile I have wondered if I had ever kept any pictures of birds on wires..I had more than a few... RIP Leonard.


Like a bird on the wire, Like a drunk in a midnight choir
I have tried in my way to be free

I can't believe twenty-five years have passed, but way back in 1991 I was lucky enough to meet and photograph Leonard Cohen at the Canadian Junos Music awards in Vancouver. That night Leonard Cohen was inducted into the Canadian Music Hall of Fame.

I also saw him perform at the 1970 Isle of Wight Festival, which also featured Jimi Hendrix, The Who, The Moody Blues, Jethro Tull, Ten Years After, ELP and that was just a sampling of an outstanding line-up.

I also had the privilege of hearing him when he visited Vancouver a few years back. That night the concert was so uplifting that it felt the whole audience were on the wings of angels. Since his death Monday I have been listening to his music non-stop. 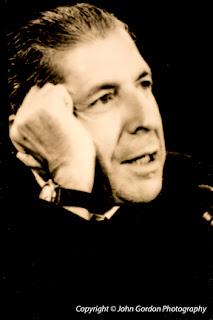 Since his passing I have been looking for a box of negatives and eventually found these from 1991. After his induction he came backstage to talk to reporters. He was extremely gracious but really he sounded a little embarrassed about his achievements, I don't think awards were his thing! 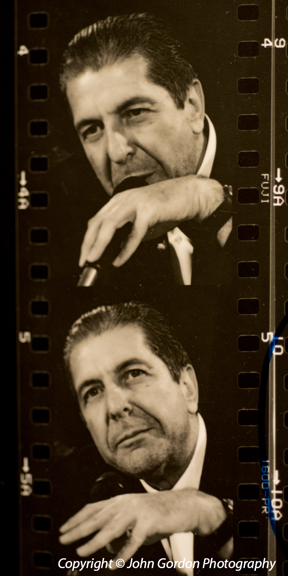 As you can see I circled the frame below for publication with china marker. Those were the days! 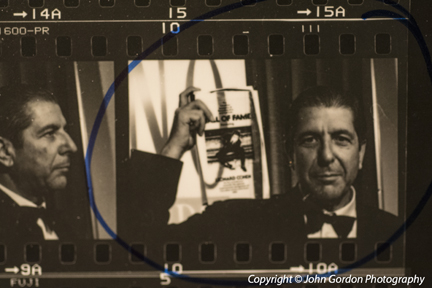 "It's never too late to watch birds on a wire:

Email ThisBlogThis!Share to TwitterShare to FacebookShare to Pinterest
Labels: Leonard Cohen_bird on a wire_avifauna_johngordonphotography_Junos 1991