"A Whole Lot of Sandpipers Going On"

Last week I went to Boundary Bay and never took a single shot. Yesterday was far different, some might say the stars were in alignment. I was of the best days birding I have ever experienced on the bay and believe me there have been quite few.
Way out on the mud flats several thousand black-bellied plovers, western sandpipers, sanderlings and a few dunlin were making their way up the beach on the flood tide. 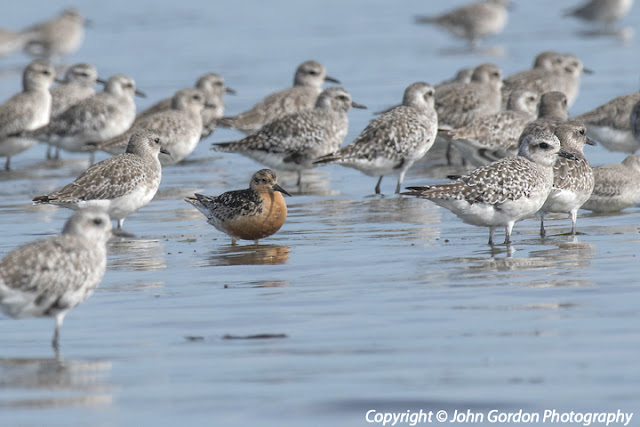 One bird, a red knot stood out like the proverbial sore thumb. There were two red knot I could see as well as three short-billed dowitchers and a marbled godwit. The latter too far way even for a record shot. I didn't want to push my luck as a large female peregrine falcon was patrolling the foreshore and any sudden movements would have sent the flock skyward.


The tide was coming in and while the plovers sought cover and safety a little further offshore many of the sandpipers hung close to the dyke where feed was plentiful.

As luck would have it I bumped into Roger Foxall, an excellent birder. I was able to point out the red knot for him which turned out to be a year bird for both of us. He helped me ID the short-billed dowitcher and explained the plumage difference between long and short-billed.
Roger went his way and I began looking for the buff-breasted sandpiper that had been seen the day before. Not long after Roger called me over to look at the juvenile ruff he had spotted. I had difficulty finding it among the flock but finally managed a flight shot. The ruff is a very rare bird in these parts with only one or two seen each year. Soon however it had flown off into the distance.

As luck would have it the bird had flown back from the pilings to the foot of 104 where a number of us were able to photograph the bird again.

On most days a ruff or even the red knot would have been a good day but then the word came that three buff-breasted sandpipers were just a few hundred metres further along the dyke you know Christmas had arrived early.

Lord of the flies


It was a perfect evening on the bay with a fantastic selection of birds to photograph and observe. Perhaps i'll see you all down there tonight for a repeat performance

"It's never too late to stop birding"