UK and Asia readers might wonder why this blog features the very common Black-headed Gull. Simple, it's only the second record in British Columbia since 2001. That's enough of a reason for many birders to make the trek to a small Vancouver pond. A red beak and legs make is easy enough to spot amongst the similar sized Ring-billed and larger Glaucous-winged Gulls.

It took a while to find the bird as it was on the water when I arrived. Finally it flew over to a grassy area with a few ring-billed and just as I was going to snap a picture a dog flushed the flock and off they flew.

Later a savvy photographer from Washington State came armed with a loaf of bread (why didn't I think of that) and soon the gulls were temped to fly close enough for some flight shots. 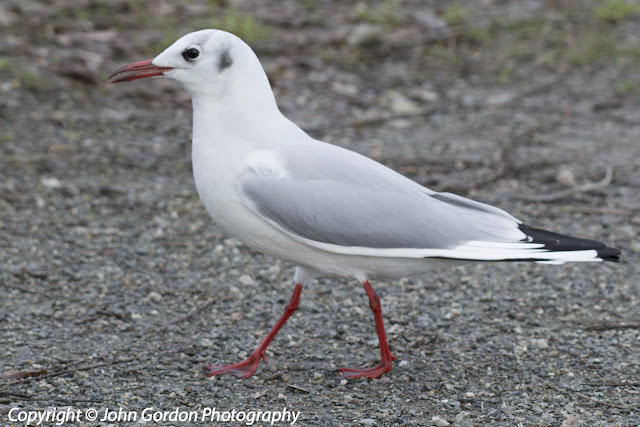 The red legs were a giveaway compared to the pale yellow/green of the Ring-billed Gulls.

Cloverdale/Langley
BC Canada
Posted by John Gordon at 18:15